The Art of Justice 9, Decolonizing Places | Theirs And Ours At CCCADI In East Harlem 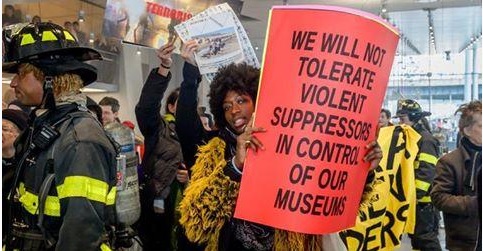 The Caribbean Cultural Center invites the public to the 9th annual Art of Justice on May 15th from 6:30 pm to 9:00 pm for an open strategic discussion with Arlene Dávila, Nitasha Dhillion, Shellyne Rodriguez, and Marz Saffore to address the issue: Decolonizing Places l Theirs and Ours. The Art of Justice is an interactive conference series on the intersections of art, activism, and cultural equity. CCCADI is located at 120 East 125th Street between Park and Lexington Avenues. Suggested donation: $5-$10.

The activism by Decolonize This Place, the Manifesto prompted by El Museo’s actions of community erasure and exclusion of Latinx creatives motivates this open discussion. It is important that our audiences understand the issues and the actions that must be taken to assure that cultural equity drives the cultural institutions that are charged with reflecting the diversity of our experiences. We know there are varied levels of understanding and therefore of actions.

Historically Eurocentric institutions have reflexed the ideology of the wealth and culture grounded in the superiority of their aesthetic.

Historically Eurocentric institutions have reflexed the ideology of the wealth and culture grounded in the superiority of their aesthetic. Institutions developed within our communities were designed to center the aesthetics and perspective of marginalized communities who are the children of free and exploited labor who built this nation and whose art is housed in Eurocentric institutions to enhance their wealth. The panel will address how the importance of defending the Ideology of our communities and cultural institutions moving forward. The program curated by Dr. Marta Moreno Vega, Founder of Creative Justice Initiative and Caribbean Cultural Center African Diaspora Institute.

Through the Art of Justice series, thinkers and policymakers come together in an open discussion with the community to sketch out paths that will positively impact our efforts in achieving racial justice, cultural equity and an accessible arts environment that embraces the spectrum of who we are as residents of this diverse majority city.

Arlene Dávila is a Professor of Anthropology and American Studies at New York University and founding director of The Latinx Project, an interdisciplinary space focusing on Latinx art, culture and history at NYU. Her research spans urban ethnography, the political economy of culture and media, consumption, immigration and geographies of inequality and race. Dávila’s work has focused on the ethnographic study of the local, national and global dynamics of contemporary U.S. Latino/a and Latin American cultural politics. These research interests grew out of her early work in Latinx and culturally specific museums and spaces in New York City, and have developed through her continued involvement in Latinx advocacy and her interest in culture and creative industries across the Americas. She’s author of numerous books. Her latest book, Latinx art: Artists, Markets and Politics is forthcoming with Duke U Press.

Nitasha Dhillion is a writer, artist, educator, and organizer. Dhillon is the co-founder of MTL Collective with Amin Husain, a collaboration that joins research, aesthetics, organizing, and action in its practice. As MTL, they are co-founders of Tidal: Occupy Theory, Occupy Strategy magazine, Global Ultra Luxury Faction (G.U.L.F.), the direct action arm of Gulf Labor Artist Coalition, Strike Debt and Rolling Jubilee, Direct Action Front for Palestine (DAFP), Decolonial Cultural Front, and most recently, Decolonize This Place, a movement space centering around Indigenous struggle, Black liberation, free Palestine, dismantling patriarchy, global wage workers, and de-gentrification. Dhillion is currently a PhD candidate at the State University of New York at Buffalo where she is also an adjunct in the Department of Media Study.

Shellyne Rodriguez is a visual artist who works in multiple mediums to depict spaces and subjects engaged in strategies of survival against subjugation. This emotive inquiry puts the Baroque in contact with a Decoloniality rooted in hip hop culture. Her work utilizes text, drawing, painting, found materials, and sculpture to emphasize her ideas. Shellyne graduated with a BFA in Visual & Critical Studies From the School of Visual Arts and an MFA in Fine Art from CUNY Hunter College. She has had her work and projects exhibited at El Museo del Barrio, Queens Museum, New Museum and her work has recently been commissioned by the city of New York for a permanent public sculpture, which will serve as a monument to the people of the Bronx. Shellyne is also a community organizer and an active member of radical grassroots collective Take Back the Bronx.

Marz Saffore is an artist, organizer, and educator born and raised in Richmond, Virginia. In 2015, she earned her B.A. in Studio Art and Film & Media Studies from the University of Rochester, and she earned her M.F.A. in Studio Art from NYU in 2017. Her multimedia art practice blurs the line between that which is art/culture, political/personal, and private/public through video, performance, and installation. Marz is also a member of MTL+ Collective, a group of artists, writers, and educators who combine research and aesthetics in political action. MTL+ Collective founded and facilitates Decolonize This Place, an action-oriented movement focusing on Indigenous struggles, Black liberation, Free Palestine, dismantling patriarchy, de-gentrification, and workers. Currently, Marz is completing her first year as a Ph.D. student in Media, Culture, and Communication at NYU Steinhardt.

…grounded her life’s work in the powerful experiences of people of African descent, developing cultural institutions that affirm their impact on the world stage.

Marta Moreno Vega, Founder of Creative Justice Initiative and Caribbean Cultural Center African Diaspora Institute Dr. Marta Moreno Vega has grounded her life’s work in the powerful experiences of people of African descent, developing cultural institutions that affirm their impact on the world stage. She has created a legacy of international advocacy and institution-building. Dr. Vega is recognized globally for her contributions as a respected scholar, producer, activist, educator, author, professor, and Yoruba priestess.

Photo credit: Activists protesting against the continued presence of Warren Kanders on the board of the Whitney Museum. By Erik McGregor/Pacific Press/LightRocket via Getty Images.