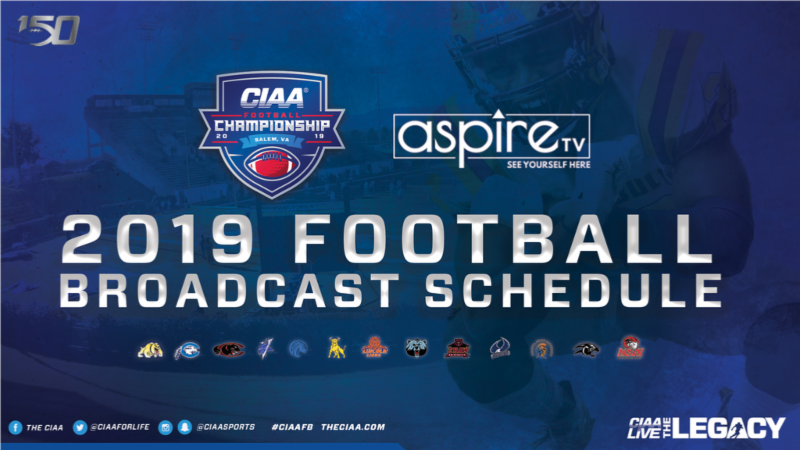 The Central Intercollegiate Athletic Association (CIAA) has announced its broadcast schedule for the 2019 football season. This year’s schedule of games will be televised live on Aspire TV. This will be the fourth year of a partnership between the CIAA & Aspire TV to provide live broadcast coverage across multiple platforms.

“We’re excited to partner with Aspire TV again this year to broadcast five football games throughout the season. It’s a great opportunity to enhance the visibility of our institutions, coaches, and student-athletes while providing us an opportunity to connect with our passionate fans across the country and celebrate the rich tradition of the CIAA,” said CIAA Commissioner Jacqie McWilliams.

The five-game conference slate will include four (4) regular season football games as well as the 2019 CIAA Football Championship held in Salem, VA on November 16.

“As a proud HBCU alumna, the rich legacy of the CIAA and its member institutions is not lost on me or AspireTV. We are excited to renew our commitment to HBCU Sports and to continue our partnership with the CIAA, bringing awareness to the incredible student athletes and the unique spirit of the entire CIAA community,” stated Aspire TV General Manager Melissa Ingram

The CIAA broadcast schedule will kick-off on Saturday, September 28 in Rocky Mount, NC with the Down East Classic as Elizabeth City State takes on Fayetteville State. The Broncos will help close out the regular season television schedule as they battle division rival Winston-Salem State on November 16th in Winston Salem, NC. Local listings of each game’s broadcast will be forthcoming.

Aspire is the television entertainment network from Earvin “Magic” Johnson that reflects the people and modern-day experiences of black and urban culture in a way that is inspiring, authentic and entertaining. Aspire offers original scripted and reality series, specials and independent films as well as beloved dramas, contemporary comedies and provocative documentaries that allow you to connect and … see yourself here. The network was launched on June 27, 2012 by Magic Johnson Enterprises, which acts as a catalyst for driving unparalleled business results for its partners and fosters community/economic empowerment by making available high-quality entertainment, products and services that answer the demands of ethnically diverse urban communities. Aspire is available in 24 of the top 25 African-American markets including New York City, Los Angeles, Atlanta, Chicago and Washington, D.C. For more information, visit www.aspire.tv