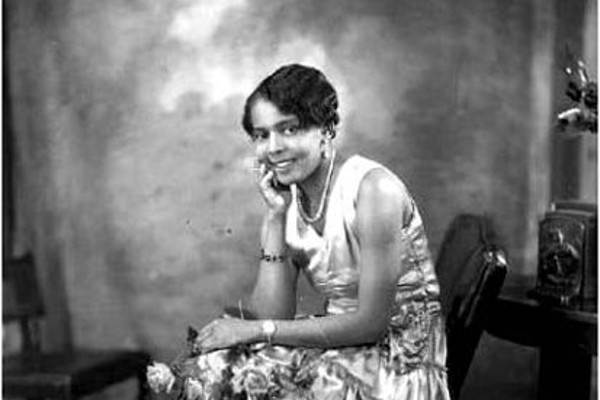 We originally ran The Story Of Harlem’s Baby “Betty Boop” Esther in 2016, and again in 2017, and received a number of emails asking if Baby Esther was the original “Betty Boop” voice? We suggest reading the story to decide for yourself.

We found this story that sounds very similar to the Little Richard story, at times artists lose their Intellectual Property Rights. The post has been edited for this posting:

Esther Jones is a singer who was known by her stage name, “Baby Esther.” Baby Esther was a popular entertainer at Harlem’s Cotton Club in the late 1920s. Baby Esther interpolated words such as ‘Boo-Boo-Boo’ & ‘Doo-Doo-Doo’ in songs at a cabaret.

Helen Kane saw Baby’s act somewhere between 1927-1928 and had first used it in her first Victor release “That’s My Weakness Now” she then used it in the Broadway show Good Boy and had a hit with the song entitled I Wanna Be Loved By You in 1928 and became famous overnight. An early test sound film was also discovered, which featured Baby Esther performing in this style, disproving Kane’s claims. Baby Esther’s manager also testified that Helen Kane had seen Baby Esther’s cabaret act in Harlem, 1928. Supreme Court Judge Edward J. McGoldrick ruled:

“The plaintiff has failed to sustain either cause of action by proof of sufficient probative force”.

In his opinion, the “baby” technique of singing did not originate with Kane. Other claims asked to Kane during the trial were that a witness claimed to have heard the phrase uttered in a Edith Griffith song, another defence asked if she had heard a 1913 song called Bou Dou Ba Da Boum  to which Helen had denied.

Edith Griffith and Felix Mayol were also used as evidence against Helen Kane, but the old footage of Baby Esther performing the routine helped prove that Helen Kane was not the “first” Boop-Oop-a-Doop singer in the business.

Information provided by Ray Pointer (Lou Fleischer Historian, Max’s brother):  The film of “Baby” Esther was a double system sound technique like Vitaphone. Lou Fleischer told me the whole story. The film did not “break” at the point of the Boop-Oop-a-Doop part. They did not show this in court. What happened was the print has been spliced in several places due to breakage and went out of sync at the crucial point due to the lost frames. Lou and Kitty Pfister, head Film Cutter stayed up all night locating spots to insert black film slugs to replace the lost frames to put the crucial spot back in sync. A new married print with optical sound was produced, the Paramount News Lab being kept open all night waiting for this to present as evidence the next morning. The remark about Justice McGoldrick being “bribed” is a conclusion not based on fact. There was enough remaining evidence to prove Miss Kane’s case. However since there is a Film Faily Trade Ad that places a picture of Helen Kane next to an early version of Betty Boop. Further evidence can be found in the tampering with the original negative to “Stopping the Show”, which was built around Mae Questel’s (who studied drama at Columbia University) stage act impressions, which prompted Max Fleischer in hiring her. This is the first official Betty Boop cartoon which consists of a series of contemporary celebrities Margie Hines (who also voiced Olive Oyl), Little Ann Little, Kate Wright, Bonnie Poe. Each is introduced by a photograph of that celebrity with animated lips and the voice of that celebrity coming from the picture. Only the voice of Maurice Chevalier is authentic.  The voice of Fanny Brice is an imitation by Mae Questel. Oddly, the sequence begins with Betty going right into “That’s My Weakness Now”, a song made popular by Helen Kane.  This song is not set up by the celebrity picture on the easel as the others are. You hear an audio splice from the audience applause going to the song.  At two points there is a Long Shot, one of which Pans from the stage to the audience. In the background is an image on an easel that looks like the image of Helen Kane. Why else would it be there? This direct reference to Helen Kane was deliberately removed from the negative so that a new print could be shown in court that would not indicate an edit. But it clearly was removed from the negative. Paramount took advantage of the ignorance of film technology on the part of court, which accepted what they saw not knowing what had been done to alter the evidence.

Lou Walton (Sometimes his second name is mistaken for Bolton) was Baby Esther’s theatrical manager. Baby Esther did not attend the trial, but Lou Walton spoke in the Fleischers and Paramount’s defence.

Defence Attorney: What sounds did she (Baby Esther) interpolate?

Defence Attorney: What other sounds?

Defence Attorney: Any others?

The court stenographer broke down at this point, He threw his hands into the air as a gesture of despair and announced he would need aid in spelling the “meaningless sounds” .

Walton could not give him any aid, Philips did however.

Other defense witnesses were Bonnie Poe and Margie Hines whose voices were used in the Betty Boop films.

Recording of the Helen Kane “Boop-Opp-a-Doop”  jargon in the singers $250,000 damage suit trial in Supreme Court, Manhattan has been driving the court stenographer to distraction.

He threw his hands in dismay and yelled for help today when the testimony was offered as to the in-articulate jargon of Baby Esther. Negress nightclub singer from whom the defense was trying to establish. the Helen of the rolling eyes got the “Boop-Oop-a-Doop” idea.

In 1934 the Afro-American newspaper wrote:

Baby Esther originated the Boop-a-Doop style of singing, and Helen Kane white movie and radio star barefacedly swiped it and made a fortune from it a court trial reveals as Miss Kane sues imitators, “Mae Questel, Bonnie Poe, Little Ann Little, Kate Wright, Margie Hines of the Boop style. T’would be logical now for Baby Esther to sue Miss Kane to even things all around.

The Afro-American also reported in a headline that The ‘Boop’ Song Is Traced, the sub head reads the Witness in Helen Kane’s Suit Says ‘Negro Girl Originated Style.’

Evidence that syllables similar to Helen Kane’s “Boop-Boop-a-Doop” were sung before she began to use them was offered before Supreme Court Justice McGoldrick yesterday in the trial of Miss Kane’s $250,000 suit against Max Fleischer, the Fleischer Studios and the Paramount Publix Corporation on the grounds that they imitated her (Helen’s) style in the Betty Boop cartoons. Lou Walton, testified that Baby Esther a Negro girl under his management has iterpolated words like “boo-boo-boo” and “doo-doo-doo” in songs at a cabaret here in 1928,a nd that Miss Kane and her manager had heard her their, A sound film of Baby Esther was made, which Justice McGoldrick arranged to see to aid him in his decision.

A photo of a Ukrainian cosplayer by the name of Olya Gussy (below) who posed in several photographs as Betty Boop in which went viral and has been seen by millions of people on the internet where the photo has been mistaken as Baby Esther and/or Helen Kane.

The reason as to why the photoshoot of Oyla was mistaken for Baby Esther was because HelloBeautiful’s Lifestyle Editor Danielle Young posted the photo of the “white” Ukrainian cosplayer (the practice of dressing up as a character from a movie, book, or video game) dressed up as Betty Boop and claimed it was Baby Esther without researching the origin of the photograph, which made people believe the photograph was actually “Baby Esther”, and also lead people to believe Betty Boop was of mixed-race heritage/Mulatto.

Esther Mae Phillips originally born “Esther “Mae” Jones” sometimes referred to as just “Esther Jones” in her earlier career was a blues singer with a versatile singer who sung soul music, pop, country and mainly R&B.  Little Esther who had debuted in the 1940’s as “Little Esther” and sometimes “Little Esther Phillips”.  Her career had kicked off in “1950” with her first hit record entitled “Double Crossing Blues”.

In 1954 “Esther Phillips” was arrested for street walking and suspicion of narcotics addiction by Los Angeles police.

Esther Mae Phillips died in 1984 due to liver and kidney failure due to drugs use. Her funeral services were conducted by Johnny Otis. She was buried in the Morning Light section at Forest Lawn – Hollywood Hills Cemetery in Los Angeles. The bronze marker recognizes her career achievements, as well as quoting a Bible passage: “In My Father’s House Are Many Mansions” – St. John 14:2.

Baby Esther may have been a “stage name” in late October 1934 a woman by the name of Gertrude Saunders from Harlem not to be confused with the other actress and singer with the same name.  Ms Saunders was featured in the Afro-American as the Original Boop-Boop-a-Doop Girl.  Gertrude was then referenced in 1938 where it was declared that she debuted in Harlem at the Savoy, Connies Inn and the Cotton with Clarence Robertson and Bert Adams. She figured prominently at the “Boop-a-Doop”  $250,000 trial of Helen Kane and Betty Boop who both claimed they originated the funny twist which was also a radio rage.  Gertrude declared that it was “she” (aka Baby Esther) who actually started booping before either of them (Helen Kane and Esther Mae Phillips).

Gertrude was lastly referenced  in June 1950 as “originator” of Boop-Boop-a-Doop made famous by Helen Kane, and was boosted alongside other famous faces such as Ella Fitzgerald and Rose “Chi Chi” Murphy who had also started to Boop, but instead of Booping she’d add her own twist which was Chi-Boop-Chi-Boop, as she was known as the Chi-Chi Girl which was a pun on the Boop-Boop-a-Doop Girl.

The article above reads:

In my opinion Gertrude Saunders a veteran actress of the stage a “coined” “Boop-Boop-a-Doop” which brought fame to Betty Kane (Helen Kane a mixture of Betty Boop and Helen Kane) is the real star of the “Swing Radio” despite all arguments the contrary she does a beautiful bit of show stealing. Adverbs for the Paramount theatre.  The tabloid edition run “Swing Miakdo” simply billed as “Florence ‘O Brien” because she was a sensational star of run “Little Chillun” ans was better known by theatre patrons, But Gertrude and Billy Mitchell take all honors….., however , does a nifty role inthe show stealing and really ….the value of the producing. But tit is Gertrude’s line of patter that is repeated after you have seen the show.

Gertrude had stated in 1938 that she had booped before Betty Boop and Helen Kane.

Lipstickalley.com reports that Jazz studies scholar Robert O’Meally has referred to Baby Esther Jones (aka Gertrude Saunders) as Betty Boop’s “black grandmother.” Those famous words ”Boop-Oop-A-Doop” that are so famously associated with Betty Boop, were first sung on stage in the Cotton Club by a jazz singer named Baby Esther.

Interesting stories are fun to read. That goes for essays as well. If the author or student has difficulty with this he or she can use the website that writes essays for you and greatly simplify life and learning.

Editor’s Note: We apologize to the Saunders family for posting photographs and text that misrepresented the artist. tvzao.ru reports that through further researching (they) found numerous sources sternly and adamantly claiming Images and recordings of Baby Esther were purposely destroyed after the trial.