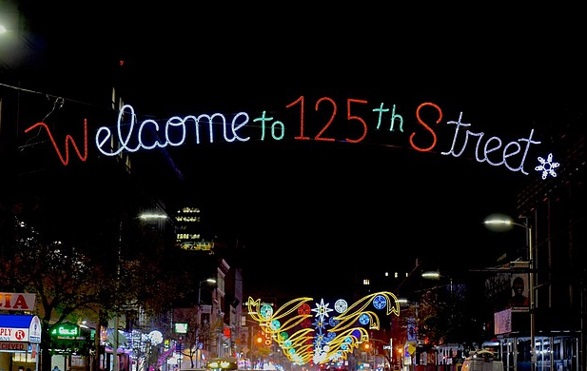 At a recent event, held at Settepani Restaurant on Malcolm X Blvd., the president and CEO of the 125th Street Business Improvement District, Barbara Askins, officially kicked-off the countdown to the 26th annual Harlem Holiday Lights 2019 celebration. This year the highly anticipated holiday event, which is held in partnership with Manhattan Community Board #9 and #10, and dubbed, Harlem Light It Up 2019, will take place on November 20th (rain date/Nov. 25th), with activities planned throughout the day, leading up to the highlight – the Parade of Lights that will herald the lighting of the legendary 125th St. corridor beginning at Morningside Avenue and 125th St. and covering a 10-block stretch.

Over the years, the event has become a prominent part of the city’s key holiday celebrations, attracting both public and media attention. Ms. Askins, who has been responsible for organizing and helping to make this event an annual tradition says, “We want to make it bigger and better every year. We want this holiday event in our community, to be something that everyone in the city will want to be a part of.”

Laiona Michelle, an actor/singer/writer who made her Broadway debut in the 2015 hit musical Amazing Grace

and recently broke box-office records at the George Street Playhouse with her performance as Nina Simone, in Little Girl Blue

, a musical that she both wrote and headlined. Ms. Michelle is now the book writer on a new musical headed for Broadway in 2020, based on the life of Nelson Mandela.

Korey Wise, one of the Central Park Five

, a public speaker and social justice activist, who has risen to prominence since the Five were acquitted and released from prison for a crime they did not commit. His story has been a key factor in the public and critical acclaim that the Netflix miniseries, directed by Ava Duvernay, “When They See Us

Leah Abraham is an Ethiopian-American entrepreneur who brings a dynamic multi- cultural foundation to everything she does, and who has elegantly traversed work-life balance to establish a successful business in the community. This amazing woman has found numerous ways to give back to the Harlem community through her passionate commitment to the business she has helped establish, Settepani Restaurant.

What You Can Expect

Included among the numerous planned activities surrounding the Harlem Holiday Lights 2019 event, is the return participation of Disney’s Marvel Superheroes

; this year, Spiderman and Black Panther

will be on hand for meet and greets, photo opportunities, and special appearances at various planned activities throughout the day. They will also be part of the big countdown to the Parade of Lights signaling the lighting of the 125th Street corridor.

Manhattan Borough President Gale Brewer, a big supporter of this event, will host her annual VIP Reception. Manhattan Community Board #9’s Children’s District will honor the 100th-anniversary celebration of the Harlem Renaissance with featured guest, the Swing Dance Society, in addition they will have face painting, an appearance by the Snow Queen, and much more for the children. The Health & Fitness District, sponsored by Emblem Health, Blink Fitness, Ryan Health and Zwanger Perisi will once again set up free health screenings and will provide access to important information promoting a healthier lifestyle for the entire family. Blink Fitness will be hosting an invigorating early morning workout, and Zwanger, a premier radiology company that has joined the 125th Street BID District, will host an open house reception and tour of their newest uptown facility.

Among the new participants, this year – the Curvy District by Lov n My Curves will host a series of events including a fashion show featuring plus-size models and meet and greets sponsored by 125th Street retailers Ashley Stewart and Lane Bryant whose audience is primarily the plus-size woman. An ensemble of thirty plus-sized models in outfits inspired by, and looking much like the Radio City Rockettes

, will be on hand for photos opps, meet and greets, and appearances at the various events. Also, joining the celebration for the first time this year will be the Apollo Theater, Harlem Stage, United House of Prayer for All People, the Mali Music Festival, NYCHA Digital Education Van, Joshua Balloons, who will donate a Balloon Selfie Frame set up, and Carver Bank, the largest African-American operated bank in the United States.

Property owners along the 125th Street location will add to the festive atmosphere by decorating their properties inappropriate holiday decor. The 125th Street corridor will be buzzing with both in-store and outdoor activities.

This year’s Parade of Lights will have a caravan of 10 floats – each sponsored by a Harlem community organization, local political leaders, community boards, as well as members of the local businesses community. Each float will be festooned with lights and alive with the sound of music and merriment befitting the season. The three Grand Marshals will be the special guest on the BID float along with the Marvel Characters and the Rockettes inspired curvy models. Add to that 8 totally blinged-out Slingshot cars from the Sling Kingz, and the Parade of Lights is complete.

As the floats move down 125th Street from Morningside heading east, the spectacular, well-orchestrated lighting of 125th Street will be activated.

“The participation this year has hit a new high,” says Ms. Askins. “We are thankful to all of the businesses and all of our community representatives and organizations that are helping us blow this event out. The historic community of Harlem deserves the kind of attention that is often relegated to the downtown communities,” she added.

The Harlem Holiday Lights/Light it Up 2019 activities will start on the morning of November 20th and will continue throughout the entire day along 125th Street. The parade route covers 10 blocks along the 125th Street corridor beginning at Morningside heading east and will circle back up 125th Street to Broadway, looping around to end up where it began.

The 125th Street Business Improvement District, created in 1993, is managed by the 125th Street District Management Association. Property and business owners, community and government leaders, residents and staff, all work closely together to improve the experiences of those who live, work, visit and invest in the Harlem Community. The 125th Street BID seeks to: catalyze economic development; encourage the going revitalization and promotion of 125th street as a premier art, culture and entertainment destination; facilitate active tourism; increase pedestrian mobility and give the streetscape a cohesive modern appearance, while reducing clutter; develop additional public space; include public art throughout the district; and create a high quality urban environment that contributes to an identity for the Harlem community.

Broadcast crews, reporters and photojournalists seeking additional information about this event may email, sammattingly@optonline.net or contact the 125th Street Business Improvement District at bid125thst@aol.com, or by calling 212.662.8999.