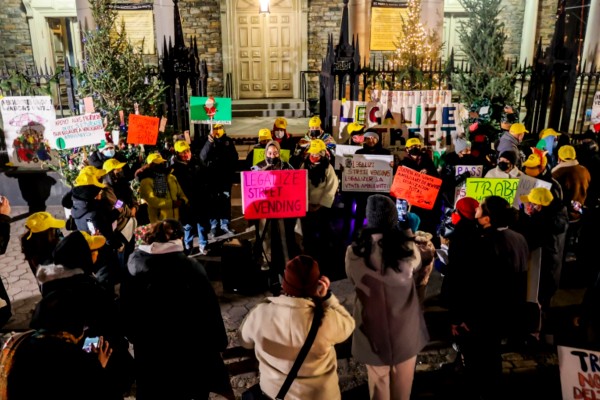 On Tuesday evening, 50+ street vendors, advocates, and elected officials with the NYC Street Vendor Justice Coalition from Harlem to Hollis.

Gathered on the steps of Saint Mark’s Church to honor the work of street vendor essential workers, sharing champurrado while decorating a Christmas tree with the hundreds of tickets street vendors have received in the past year alone for lack of business licensing.

Attendees highlighted how vendors fought hard to create the Excluded Workers Fund and gain access to small business grants, only to now use these relief funds to pay fines for vending.

In the midst of the holiday season during an ongoing pandemic, vendors each day continue to be penalized by city agencies for not having a legal pathway to work, despite their role as essential workers ensuring fresh, affordable produce, merchandise, and meals are accessible citywide.

Street vendor Lucio Gonzalez, a member of the Street Vendor Project from Fordham Road in the Bronx shared his experience: “I became a street vendor at the beginning of the pandemic after losing my job in a restaurant. I started a street vending business because it’s honest work, and I can use my skills as a cook to make a successful business. I never thought I’d receive $2,050 in fines for selling tacos when I tried to get a permit but they won’t let me. Now, I have to use my relief from the Excluded Workers Fund, which was supposed to help me pay rent, debts, and invest in my business, to pay fines.”

Vendors contribute millions of dollars in benefits to the city and state annually, but it remains nearly impossible to operate legally due to an arbitrary, decades-old cap on the number of vending licenses available–the waitlist for licenses is so long it has been closed for over a decade.

Meanwhile, vendors who try to support their families by working without licenses are subject to harassment, punitive fines, and property confiscation, forced to spend hard-fought COVID relief on paying fines to the city.

Proposed state legislation S1175A and A5081A to formalize the industry will accomplish three goals: (1) Ensure that street vending compliance and regulatory oversight is conducted by a civilian agency (2) formalize the street vending industry, creating a pathway to entrepreneurship by removing the currently insurmountable barrier to entry to the industry so that vendors who wish to do business in accordance with the law – including paying taxes, following city rules and regulations, completing all training – will be able to obtain permits to operate their business (3) expunge the records of any street vendor who may have previously received a misdemeanor for street vending.

“After a long fight, many street vendors were finally able to access small business grants, unemployment, and support from the Excluded Workers Fund, only to have to give that money right back to cover punitive fines issued by the city. Street vendors are part of the entrepreneurial backbone of our local economies, and we cannot in good faith talk about a just recovery for our state without prioritizing S1175 and the legalization of street vending in 2022,” said State Senator Jessica Ramos, Senate sponsor of the legislation.

Currently, there are only 853 total licenses for merchandise vendors, and by 2032 there will be 9,000 supervisory licenses available for mobile food vendors. The waitlist for each type of license has thousands of names – in fact the waitlist is so long it has been closed since 2007 – and vendors have been forced to either rent a permit from existing permit-holders on an underground market for up to $25,000, or vend without a permit, facing $1,000 fines and property confiscation.

“New York City’s communities, economy, and cultural fabric relies on small business entrepreneurship, and we must recognize that entrepreneurship doesn’t only apply to brick and mortar. Street vending has given thousands of New Yorkers a pathway to the American Dream, and it is time that we formalize this by decriminalizing and removing the antiquated barriers,” said Vic Lee, Co-Founder, Head of Business Development & Operations of Welcome to Chinatown.

“Street vendors are small business owners. Just like their brick and mortar counterparts, they provide essential goods to their communities and make up the fabric of our neighborhoods. For too long vendors have been subject to an unfair cap on licenses, inflating license prices and forcing these businesses––overwhelmingly owned by immigrant New Yorkers––into the shadows. It’s time we lift the caps, decriminalize street vending, and create a system of regulation that supports all small businesses in our city,” said Assemblymember Harvey Epstein.

“Vending on our streets is good for storefronts, good for public safety, good for tax revenue, good as a safety net in times of crisis … as we have seen well during these past 20 months. We look forward to celebrating the decriminalization of street vending in the New Year” said Chris LaCass of Save Our Storefronts NY.

They are part of the heart and soul of New York’s diverse small business ecosystem, and we must act now to keep it sustainable.

State Senator Robert Jackson said, “Street vendors, a largely immigrant industry, have long played an important role in New York, providing an essential service to our working-class communities. Yet, for far too long, they have been victims of a broken system that criminalizes them for trying to make a living, and that isn’t right. I proudly support the formalizing of the street vending industry. As a progressive leader, NY must remove all barriers that prohibit a clear pathway to entrepreneurship for our essential and immigrant residents. They are part of the heart and soul of New York’s diverse small business ecosystem, and we must act now to keep it sustainable.”

“On behalf of Make the Road members who faced mass unemployment and sought any meme it is time for comprehensive legislation that protects street vendors and creates a pathway to entrepreneurship. Immigrant street vendors survive at the intersections of targeted harassment from police and exclusion from the social safety net. Bypassing S1175A and A5081A, New York will bring thousands of working families into the fold of a formalized industry” said Angeles Solis, Lead Organizer – Workplace Justice Team at Make the Road New York.