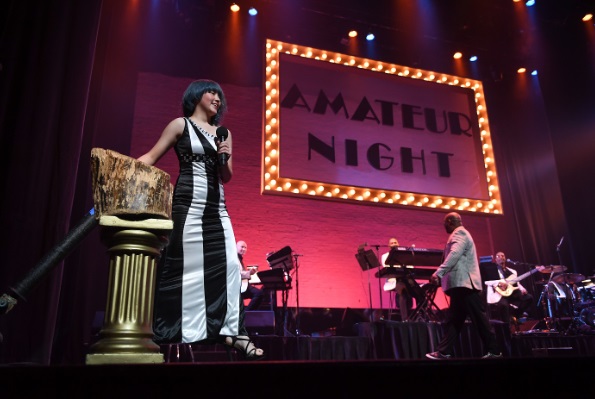 On Wednesday, November 27, 2019 the world-famous Apollo Theater will hold the Grand Finale of Amateur Night at the Apollo for the 2019-2020 season. This year’s finalists will battle for the title of “Super Top Dog” and a cash prize of $20,000, along with the youth competition for the “Star of Tomorrow” and a $5,000 cash prize. Since its inception in 1934, the Apollo Theater’s Amateur Night, the original large-scale talent show, has been one of New York City’s most popular live entertainment experiences, launching the careers of thousands of performers and attracting audiences from all over the world.

For the first time ever, the Grand Finale audience will enjoy special performances by the winner of the first-ever Amateur Night Japan, the first international licensing partnership for the program. After receiving more than 1,000 video auditions and a round of live auditions, “Super Top Dog,” a four-person youth dance troupe named 544 6th Avenue, and “Producer’s Pick” Wakasa, a female vocalist, will share their talents with an American audience when they perform live on November 27, 2019.

Finalists performing in the November 27 “Child Star of Tomorrow” category include:

With music at its core, the Apollo’s programming extends to dance, theater, spoken word, and more. This includes special programs such as the blockbuster concert Bruno Mars Live at the Apollo, 100: The Apollo Celebrates Ella, the annual Africa Now! Festival, the New York premiere of the opera We Shall Not Be Moved, and the world premiere of Between the World and Me . The Apollo is a performing arts presenting organization that also produces festivals and large-scale dance and music works organized around a set of core initiatives that celebrate and extend the Apollo’s legacy through a contemporary lens; global festivals including the Women of the World (WOW) Festival and Breakin’ Convention, international and U.S.-based artist presentations focused on a specific theme; and special projects, multidisciplinary collaborations with partner organizations.

Since introducing the first Amateur Night contests in 1934, the Apollo Theater has served as a testing ground for new artists working across a variety of art forms and has ushered in the emergence of many new musical genres—including jazz, swing, bebop, R&B, gospel, blues, soul, and hip-hop. Among the countless legendary performers who launched their careers at the Apollo are D’Angelo, Lauryn Hill, H.E.R., Machine Gun Kelly, Miri Ben Ari, Ella Fitzgerald, Sarah Vaughan, Billie Holiday, James Brown, Gladys Knight, Luther Vandross, and Stevie Wonder; and the Apollo’s forward-looking artistic vision continues to build on this legacy.