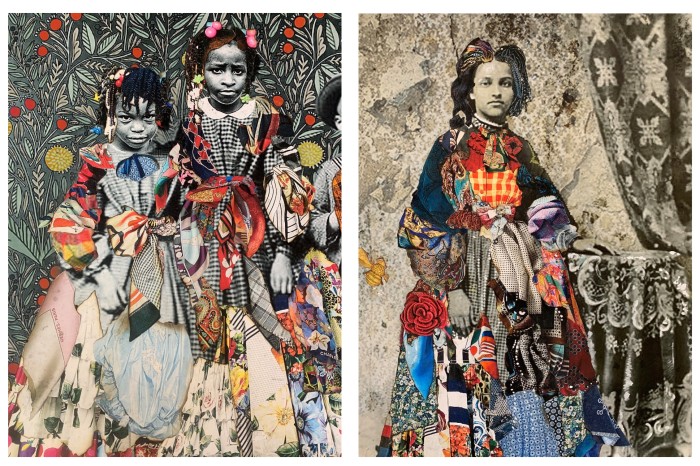 Claire Oliver Gallery announces the inaugural exhibition Who That Is? by artist Stan Squirewell, marking the artists’ debut at the gallery, on view March 25 – May 15, 2022.

Through a ritualized process, Squirewell’s work examines who curates and controls the narratives that become accepted as history; from what perspective is history written, whose stories are told, and whose are neglected?

Featuring more than 15 new works by the Louisville-based artist, Who That Is? showcases works from Squirewell’s series While Shepherds Kept Their Watching, the creation of which is a summation of the multimedia artists’ practices of painting, photography, sculpture, and performance.

“As a child of the hip hop era, born in the 70s, growing up in the 80s and 90s, I look at my work as almost remixing, crate-digging, but my crates are museums, private collections, and historical narratives,” states Squirewell. “I remix my pieces according to my own way of writing history and who we are as people.  My work exists as a veil between the spiritual and real world, it’s a bridge that offers a connection between the two.”

The works in the Discovery series are founded on the concept of character creation and a ritualized rebuilding of a new identity using the holy trinity of the artist’s work: painting, photography and sculpture. Squirewell uses found historic photographs of Black people, whose complex human identities have been erased either through time or through design, as a starting point.

He then layers collage, painting, and photography with each new element undergoing a ritualized burning that is an abstracted nod to mythology, lore, and Judeo-Christian rituals imbuing the character with rebirth and acting as an offering to the spiritual world.

Squirewell then sculpts unique frames for each image, beginning with the transcription of a text statement on the work, composed of binary code, indigenous American and African glyphs using the shou sugi ban technique of blackening wood, which are then mitered into frames. 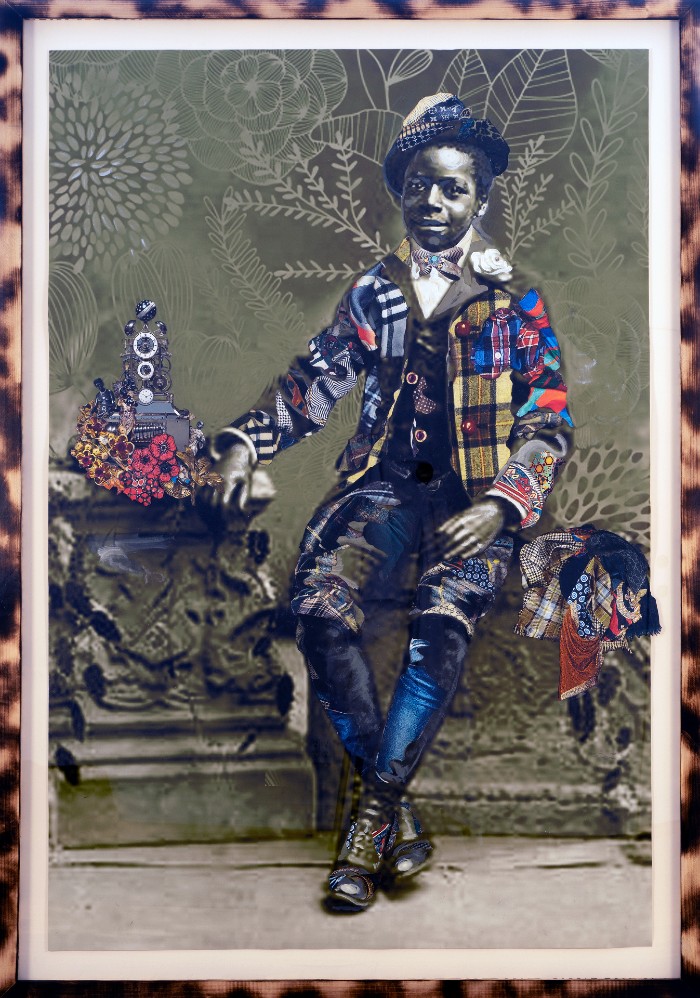 Squirewell’s own family history has been a driving influence for the artists after in his 20s, he learned that his ancestry was not what he had been told but actually included indigenous American roots.

Looking back at census and enlistment records, it became apparent how racial, cultural, and ancestral origins become blurred or even erased, sometimes by accident and sometimes on purpose.

This inspired Squirewell to question historical perspectives, which are often presented as truth, and explore how we are taught simplified and singular narratives that disregard the complexities of contemporary identity.

Stan Squirewell (b. 1978) is a painter, photographer, installation, and performance artist. Born and raised in Washington, DC in the Barry Farm neighborhood, just a few blocks away from The Nicholson Project, Squirewell established a serious art practice while working from his Harlem-based studio before moving to Louisville, KY where he currently lives and works.

Squirewell’s artistic training began at the Duke Ellington School of the Arts. Since graduating he has continued his tutelage under many of DC’s legends including artists Michael Platt and Lou Stovall.

He holds an MFA from Maryland Institute College of Art’s Hoffberger School of Painting (2007) where he studied under the late Grace Hartigan and is the first winner of the Rush Philanthropic and Bombay Sapphire Artisan series.

He has performed with Nick Cave (SoundSuits) at the National Portrait Gallery, and Jefferson Pinder with G-Fine Arts.

His work is held in private and public collections including the Reginald F. Lewis Museum in Baltimore, MD, the Robert Steele Collection, and the Smithsonian’s National Museum of African American History and Culture, among others.

Claire Oliver Gallery is located in Central Harlem in a four-story brownstone.

For nearly 25 years, Claire Oliver Gallery has showcased and celebrated artwork, with a focus on work by women and people of color, which transcends and challenges the traditional art historical canon.

Our forward-thinking program and exclusive commitment to the primary market allows for an intensive focus that has nurtured and grown the careers of our artists.

Many of the gallery’s artists have been included in The Venice Biennale, The Whitney Biennial, and biennales in Sydney, Pittsburgh, and Lyon and have exhibited works in major international museums including the Smithsonian American Art Museum, The Art Institute of Chicago, Center Georges Pompidou, The Philadelphia Museum of Art, and The Los Angeles County Museum of Art amongst others.

Claire Oliver Gallery artists are included in the permanent collections of many important museums worldwide including The Smithsonian American Art Museum, The Art Institute of Chicago, The Tate Britain, The Metropolitan Museum of Art, The State Hermitage Museum, MoMA, and the Museum of Arts and Design amongst many others.

Claire Oliver Gallery held the first American exhibition for the Russian collaborative AES+F, whose work went on to twice represent Russia in the Russian pavilion of the Venice Biennale.

Gallery artists have received prestigious fellowships including Fulbright, Guggenheim, USArtist, and National Endowment for the Arts.