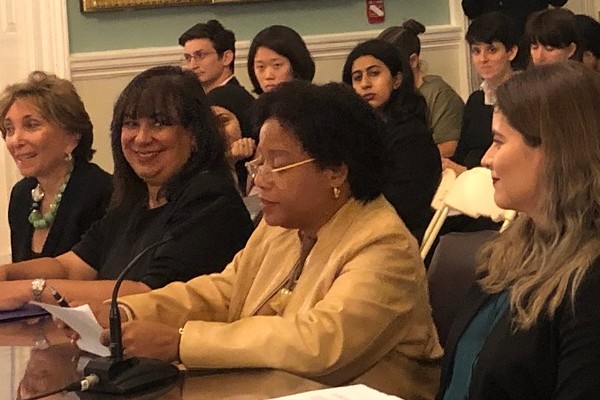 During the testimony, Dr. Delmont called on lawmakers to adopt critical policies to bridge the persistent gaps to mental health service access for NYC’s immigrant communities from Harlem to Hollis.

Good afternoon and thank you for the opportunity to address the Committee on Mental Health, Disabilities and Addiction jointly with the Committee on Immigration. Thank you to committee chairs Diana Ayala, Alicka Ampry-Samuel, and Carlos Menchaca, for the opportunity to address both committees today. And a special thank you to the Health Committee Chair Mark Levine for his unwavering support. My name is Dr. Delmont, and I am here today to submit testimony on behalf of SOMOS, a network of over 2,500 multilingual physicians in the Bronx, Queens, Manhattan, and Brooklyn who have unified to ensure Medicaid recipients receive high-quality, culturally competent healthcare.

SOMOS was founded in 2015 by Dr. Ramon Tallaj out of a burgeoning need to better serve disadvantaged communities across New York City. SOMOS has worked to advance healthcare reform because we are committed to offering the poorest Medicaid patients comprehensive medical care at a manageable cost. Furthermore, SOMOS has reduced preventable Emergency Room visits for patients with behavioral health diagnosis by 12%*.

According to a 2015 study conducted by Mayor De Blasio’s Office, at least one in five New Yorkers experiences a mental health disorder in any given year. Here in our city, we are not only in the midst of a mental health crisis, but we are also experiencing a growing immigrant population. New York City is home to 3.1 million immigrants, many of whom are living in poverty. Despite the impact of mental illness on homelessness, economic productivity, and healthcare costs, it remains significantly underfunded.

Last year, SOMOS launched a first-of-its-kind study, the State of Latino Health in New York City. The study surveyed nearly 1,000 Latino physicians and Latino patients seeking to better understand how, after decades of efforts designed to bring health care to under-served Latinos, persistent disparities remain. We found that only one-third of Latinos in New York City find mental health services to be easily accessible. High rates of mental illness within the immigrant community proves a need for additional resources. For example, in 2017, half of Latina girls nationwide experienced depression and over one in five contemplated suicide due to the unique challenges that plague their community: 55% of Latina girls fear a friend or family’s deportation and 24% were harassed due to their nationality with increased anti-immigrant rhetoric. In parallel, 40% of elderly Asian immigrants in New York City reported experiencing depression. These numbers are a stark reminder that immigrants are in dire need of greater support to overcome the emotional stressors that come with separation from one’s country of origin, family members, and cultural traditions.

Migrating to a new country can cause a variety of psychological challenges that produce feelings of anxiety, depression, posttraumatic stress disorder, isolation, or a loss of social connection, and suicidal thoughts. These sentiments are exacerbated by the financial pressure they face to work long hours as they try to navigate an unfamiliar environment and culture, a struggle particularly difficult for immigrants who do not speak English.

In response to the tens and thousands of unaccompanied minors who have settled in New York, we launched the SOMOS Tu Familia initiative, which is part of a larger statewide effort to provide comprehensive healthcare as well as social and legal services to undocumented families. Through this program, SOMOS created a core Compassionate Care Team to conduct several screenings, including physical health, behavioral health, and Medicaid eligibility prescreening and then works in collaboration with the families to develop a service plan. SOMOS’ integrated approach ensures that undocumented, unaccompanied or separated minors, and their immediate families/Sponsors can access healthcare and other supporting services at no cost. These services are critical to the rehabilitation of unaccompanied minors and their families who are struggling with irreversible trauma and can only be met with not only quality care but culturally competent care.

There are a wide variety of stressors that can affect immigrants’ mental health and their utilization of mental health services. Poverty and the cost of healthcare services are among the primary barriers to accessing mental health resources. Immigrants who are poor and uninsured are the most likely to delay or avoid receiving medical care out of fear of high out-of-pocket treatment costs. Furthermore, uncertain legal status and policies like the proposed public charge restrict access to healthcare because immigrants fear they will be penalized and unable to obtain a green card for using public government services like Medicaid, even if it is necessary for their healthy development.

Other barriers include distrust of public institutions, discrimination, linguistic isolation, lack of health education, and a lack of knowledge of the mental health services available. In spite of its ubiquity, mental illness is still an invisible issue within the immigrant community because mental health is frequently regarded as a Western concept based on Western theories that are ineffective at treating minorities. In addition, mental illness is deeply stigmatized in many immigrant cultures, which prevents individuals from seeking professional help out of fear of being ostracized from their community.

Clearly, we all need to work together to do more to adequately address the mental health needs of our immigrant families.

At SOMOS, our focus is on increasing accessibility to linguistically competent services, supporting research into immigrants’ healthcare needs, and raising awareness on the importance of mental health in immigrant communities.

The first step is to match patients with doctors who live in their neighborhood, speak their language, and are a part of the community because language and a lack of cultural understanding can function as major barriers to healthcare access. Linguistic and culturally competent mental health services are essential because they define mental health in a way that is digestible to individuals who are still grappling with the concept of mental illness. They also integrate trusted community-based sources and services such as local churches or religious leaders, using a more preventative and proactive method that can address their mental health needs at the core.

Moreover, we must invest in community education by developing more effective outreach strategies that can disseminate information to the public and by providing community workshops and events that can discuss mental health, offer alternative therapy classes, and potentially reduce its stigma.

We are extremely encouraged that the New York City Council is taking the issue of mental health in immigrant communities seriously, and holding this important hearing today. We welcome any new efforts to work together with all of you in your districts across the city.

A community is only as healthy as its access to healthcare. We urge the city to consider the recommendations discussed throughout this hearing to help bridge the healthcare gap and create a stronger, healthier immigrant community here in New York City. We would be honored to partner with the city on this mission. Thank you again for giving us the opportunity to speak publicly today.

*According to the preliminary Measurement Year 4 results released by NYSDOH on July 12, 2019.