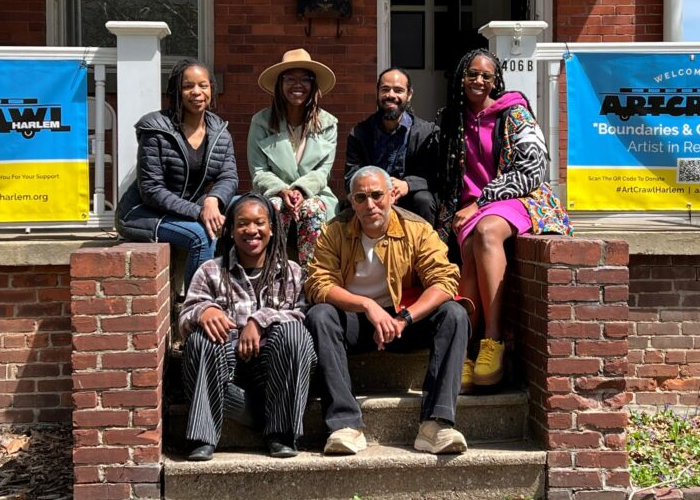 ArtCrawl Harlem (ACH), a NYC-based non-profit arts organization will host its 3rd season on Governor’s Island and proudly announce that six artists have been accepted into the ACH “Boundaries and Connection” Artist Residency Program.

The program will be from May 1st through October 30, 2022 on Governors Island, NYC. This year the organization will move into larger accommodations at 406b Colonels Row, allowing the expansion from three artists to six artists in residence as well as three additional artists doing public and interactive art installations. ArtCrawl Harlem has awarded six NYC based artists a residency program.

A group exhibition featuring their work is planned for November at a Heath Gallery in Harlem.

ArtCrawl Harlem along with other local arts and culture programs returns to Governors Island to offer programs and residencies within the historical homes on Nolan Park and Colonels Row as well as welcome the public in for art exhibits, open studios, art talks and more.

Artists will also have access to Governors Island’s expansive landscapes as a resource, helping them to retreat and reflect on their practices.

Cat Schmitz will present “Much Needed Love” an installation exploring courageous boundaries in the face of adversity and uncertainty. Theda Sandiford will present “Free Your Mind” and “Personal Baggage” interactive installations where visitors lighten the load of personal baggage via Theda’s Emotional Baggage Carts as well as release experienced microaggressions by sharing their story on a free your mind ribbon which will be woven into the “Free Your Mind” blanket.

Finally, Michael Coppage will present “Black Box” A Community Impact Project which is an engagement platform aimed at making black women and men accessible beyond the workplace and play space in an effort to facilitate authentic social and cultural connections and conversation surrounding race and culture.

ArtCrawl Harlem Boundaries and Connections residency program recognizes the importance of artists having the freedom, space, and resources to create. Ulysses Williams, ArtCrawl Harlem Executive Director states, “Opportunity and Space are integral components for an artist’s success in advancing their work and careers.

ArtCrawl Harlem’s residency program recognizes the significant impact of providing space for artists to work within and share their art with the community.”

The aim is to elevate Harlem on the greater metropolitan cultural map, while providing both education and quality experiences to visitors, tourists, and members of the community.

Daniel Robin Clurman is a self-taught Black – Jewish Queer artist working and living in both Brooklyn, New York, and the Hudson Valley area. His art has been featured in numerous group shows and appears in many collections in America, Britain and Europe. Daniel makes drawings of people he admires either from history or from social media.

He is engaged in the images of people for either their contributions to social justice or for his attraction to them physically. Creating a drawing helps him to create closeness with his subjects, and lessens the emotional isolation that happens in the digital age, especially during COVID.

His process begins by researching a subject through images and imagining them as part of his visual world. He then energizes the image with color using mixed media on paper to flesh out and bring to life.

Daniel is not interested in reproducing an image but in discovering something about humanity that hides in plain sight. The search for this humanity is developed by the marks he makes and allows him to be intimate with the subject.

Daryl Myntia Daniels is a Visual Artist from Cincinnati, OH, based in the Bronx, NY. Her work primarily combines figuration and abstraction through a process of performance, documentation, and mark-making techniques.

Her background in gymnastics has inspired her to investigate layers of the human body with a special interest in movement and liberation throughout the African Diaspora.

She received her BFA in Painting at Ohio University in 2013 and her MFA in Fine Arts in 2016 from the School of Visual Arts. Her work has been shown in places like the Kennedy Museum of Art, the Cincinnati Art Museum, the Hole Gallery, and the Untitled Space.

Recent solo exhibitions and projects include Sydenham Hospital: For the People By the People, a mural at Sydenham Hospital a part of the NYC Health and Hospitals Arts in Medicine Program (2021), sponsored by the Laurie M. Tisch Illumination Fund, Not Your Superwoman, a solo exhibit at Kente Royal Gallery in Harlem, NY(2021), and Black Excellence in Zone 15, a 640 Square Foot mural in Lincoln Heights, OH (2020).

Cj Priester is an African-American artist and educator born and raised in Brooklyn. She received a formal education in Fine Art and Art History from the Fashion Institute of Technology.

After earning her BA, she went on to get her MA in Special Education from Long Island University-Brooklyn. All the while, art remained at the forefront of her life. Her eccentric work blends aspects of abstraction and collage with Afrocentric realism.

Her art speaks on themes of self-exploration, identity, and what it means to be a Black woman in America. Cj’s paintings are inspired by her life’s experiences, literature, nature, and Black history. These influences are found in the textures and patterns of her artwork.

The titles of her paintings stem from poems she has written, striking lines from books she has read, or African proverbs. Priester’s paintings seek to answer questions surrounding the journey of life and love.

Her recent paintings are centered around promoting self-love and uplifting her culture. She feels heavily influenced by the artists Minnie Evans, Mickalene Thomas, Faith Ringgold, El Anatsui, the poet Nayyirah Waheed, and the author Zora Neale Hurston. In the early stages of her career, she often debated about which story to tell. “As a Black woman in a predominately white school I felt lost, and that feeling being lost started to mess with my mind and confuse my mission. I knew I was in the right place because I wanted to pursue art, but I struggled to figure out what kind of art I wanted to make. I was becoming profoundly disenfranchised and unattached to the process of making art and began to mindlessly produce solely because I was in art school and didn’t want to waste my tuition. I was so determined to fit myself into the right classification of ‘artist’ that I neglected to tell the most important story. My own. It wasn’t until my junior year of undergrad that I began to develop an artistic identity that seemed fit for me. That year I went on a soul-searching journey. I began to ask my family about our history; about where our lineage traced to and by looking back I was able to have a clearer idea of who I was moving forward.”

I was born in Houston, TX but grew up traveling the country with my brother and mother. At age 10, my brother and I were placed with a family in Brooklyn.

There were no programs and our neighborhood was dangerous, all of the kids in our neighborhood chose to hang out at the Stone Avenue Public Library. The library was a fun and safe environment for all of us. We loved surfing the web and printing out our favorite cartoon characters, this was back when printing was free and unlimited, and the MTA was still using tokens.

One day an older woman came downstairs, her name was Ms. Dean, she told us there were free art classes being held upstairs at the Brownsville Heritage House.

There I met one of the most important people in my life, Ron Lucas. Mr. Lucas trained me in watercolor and technical drawing until I was 20 years old. Mr. Lucas mentored me and served as a father figure.

From middle school up until college Ms. Dean and Mr. Lucas motivated me to pursue art. After graduating from FIT, I worked a variety of jobs in hopes of landing the creative job I desired.

When I finally landed that job, I didn’t feel fulfilled. Then the pandemic hit, I took it as a sign and opened my own art gallery. I sought to provide a creative safe haven and improve the opportunities of artists of color in NY. They in turn inspired me to create!

Heather Williams is an artist and an educator. She was born in St. Croix, and raised in Brooklyn, NY. She recently completed her Masters in Fine Arts at The School of Visual Arts in New York and is a recipient of the Paula Rhodes memorial award for exceptional achievement in MFA Art Practice.

Her short film, Safe Passage was screened on Governors Island in July 2021 and exhibited at The Museum of Science and Industry in Chicago. With a background in Art Therapy and a Montessori Primary certification she has been teaching art and running workshops for a wide range of students and participants over the past ten years. Her work has been in many exhibitions and is in several private collections.

Jaleeca R. Yancy (b. 1990; Memphis, TN) is a multi-disciplinary artist from Memphis, Tennessee, based in New York, NY. She comes from a creative family of artists, designers, and entrepreneurs who exposed her to the world from a young age.

Yancy is a graduate of Lipscomb University in Nashville, TN, with a dual major in marketing and design. After working as an in-house designer for multiple startups, she decided to focus her energy on creating her art and design studio.

She is innovative and unafraid to challenge tradition. Her art roots are in exploring imagination, experimentation, and sustainability practices. She enjoys developing aesthetically pleasing art that explores non-traditional materials and design processes.

Cat Schmitz is a designer who creates patterns that channel the joy of being a seven-year-old romping around in the mud and the safety of getting a hug from someone you love. Her patterns live across textiles that are sewn into cuddly quilts, rugs that are just as much play as they are function, and wallpaper that brightens up any space.

Don’t mistake her bold and lively patterns for toxic positivity. Schmitz’s artwork is influenced by her experiences as a domestic abuse survivor and from a childhood plagued with addiction. Her work recognizes that the world can be a brutal place and that we all need safety, comfort, and love.

Schmitz first debuted her colorful patterns at her solo show in 2019, called Be Your Own Queen. In 2021, she opened her studio doors to the public at Gowanus Open Studios where she unveiled her line of fabrics, rugs, and wallpapers. In 2022, Schmitz is expected to show her work on Governor’s Island and at the National Arts Club in Gramercy.

Originally from Chicago, He has lived and worked in Cincinnati since 2007. Coppage earned a B.F.A in Sculpture from Memphis College of Art and an M.F.A in Studio Art from The Pennsylvania Academy of the Fine Arts.

Coppage is the recipient of Artswave’s Truth and Reconciliation grant, Ohio Pretrial Justice grant, and received Awesome Foundation grants in New York and Philadelphia. He completed a TEDx Talk titled “Everybody’s Racist….and it’s O.K” and he gained national attention with his recent project “BLACK BOX” : a community impact project aimed at demystifying black men and creating authentic experiences that replaces bias and preconceived notions related to the term “Black” This series was exhibited around the country and in Puerto Rico at the National Underground Railroad Freedom Center, 21c Museum Hotel and the Ohio Arts Council’s Riffe Gallery to name a few.

Coppage has gained some attention recently with a body of work entitled “American+” after depicting white Americans as monkeys in his paintings. He has several collaborative pieces set for completion this year and also released a podcast on Spotify appropriately titled Black Box as part of his recent series.

Visitors may view the public art installation, open studios, and exhibits Saturday and Sunday, 12 Noon to 5:00 PM from May through October 2022.

Plan your visit to Governors Island. For reservations visit: https://www.nps.gov/gois/index.htm