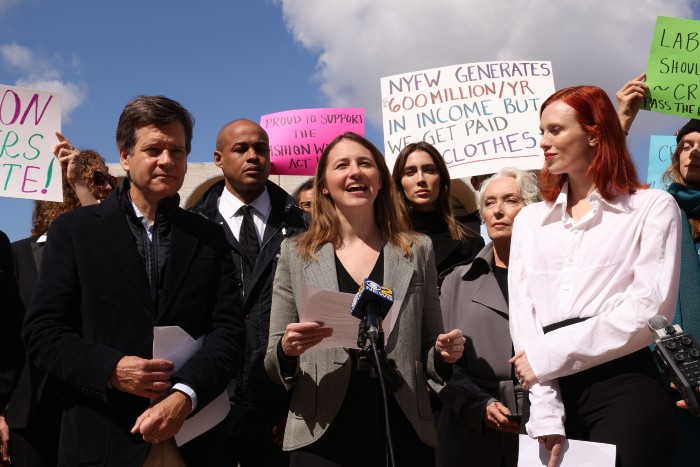 To regulate predatory management agencies that currently operate without oversight. Fashion is a $2.5 trillion global industry, and New York is its center in the U.S. NY Fashion Week alone generates close to $600 million in income each year.

In just New York City, before the pandemic, the fashion industry employed 4.6 percent of the city’s workforce, generating nearly 2 billion in tax revenue for the state.

The Fashion Workers Act would close this loophole and provide a regulatory framework for management agencies.

“A century after the Triangle factory fire, it’s unacceptable that the creative workforce behind the 2.5 trillion global fashion industry still lacks basic protections in the birthplace of the American labor movement. New York derives huge benefit off the backs of young women and girls indentured to predatory management agencies. The Fashion Workers Act is a necessary and urgent step, and we hope Albany lawmakers will take action now,” said Sara Ziff, founder and executive director of the Model Alliance.

“I’ve been a model for almost 25 years and throughout the duration of my career up to the present day my biggest challenge so far has been to obtain financial transparency in my industry. Far too often models go to work without having a clear understanding of what they are earning, then sometimes must wait up to a year to be then paid a mere fraction of what they thought they were receiving. It’s unethical and should be illegal for such practices to continue. This legislation would create much needed checks and balances for not just models but all creatives in the fashion industry,” said model, singer-songwriter, author and advocate Karen Elson.

“This bill is exactly what models need: a way to regulate our agencies so that they can’t take advantage of us anymore. We’re done being left in the dark about our earnings, and we deserve financial transparency,” said Shit Model Management, the anonymous Instagram account.

“The lack of regulation in the fashion industry leads to the toxic cycle of debt and indentured servitude to agencies that many models and creatives face. The Fashion Workers Act seeks to address the predatory practices of some of these agencies. Clients of agencies deserve transparency and accountability, the Fashion Workers Act is a critical step forward in confronting the industry’s abuses of power face on,” said model Teddy Quinlivan.

​​”It is truly astonishing that creatives in the fashion industry lack the same statutory recognition and protections afforded to our peers in other industries. The Fashion Workers Act holds special significance for me as PoC with an Indian passport, who doesn’t just rely on the sympathy of her management team for her finances, but also for her immigration status across New York, the UK and Europe in order to pursue a career as an International model. It’s absolutely imperative for lawmakers to pass this legislation and make a clear statement that one of the biggest and most profitable industries in the world has an obligation to its workers like any other – massive appreciation to the team at Model Alliance for their ongoing leadership,” said model and L’Oreal Global Ambassador Nidhi Sunil.

Unlike talent agencies, modeling and creative agencies are considered to be management companies under New York State General Business Law §171(8), known as the “incidental booking exception,” allowing them to escape licensing and regulation.

In almost every case, agencies are granted “power of attorney” as part of their agreement to represent talent, giving agencies power to accept payments on behalf of the model, deposit checks and deduct expenses, as well as book jobs, negotiate the model’s rate of pay, and give third parties permission to use the model’s image.

Models and creatives often wait months, even years to get paid for jobs through management companies, which deduct various unexplained fees from their earnings, in addition to a 20 percent commission both on the model’s fee and the client’s payment.

Model management companies crowd young models in model apartments, where they warehouse anywhere from six to 10 young women in one apartment and charge them each upwards of $2,000 a month for an apartment worth far less.

Models are held to exclusive, multi-year contracts without any promise to book work or be paid in a timely manner, which ensnares them in cycles of debt and makes models highly vulnerable to other forms of abuse, including human trafficking.

The Fashion Workers Act would require management agencies to:

Discontinue bad practices such as

Forbid the management company or client from engaging in discrimination or harassment any kind against talent on the basis of race, ethnicity, and other legally permissible categories under Title VII of the Civil Rights Act, as amended

“Fashion is one of New York’s most important industries: it accounts for 5.5% of the workforce, $11 billion in wages, and nearly $2 billion in tax revenue each year. And the cultural impact may even be greater than the financial impact. New York City is the best dressed place in the country. It’s part of what makes our city special. Yet the models often have the least leverage, the least power. That’s just plain wrong. I’m proud to carry the Fashion Workers Act with Assembly Member Reyes to finally ensure that fashion’s modeling and creative workforce has as much labor support as any other worker and to close the legal loophole by which management companies in the fashion industry escape accountability,” said Senator Brad Hoylman.

“New York is the fashion capital of the world because of the people working behind the scenes to ensure the industry’s success. Yet, too many of those workers are being exploited of their wages, while billions of dollars flow through the industry and our city’s and state’s economy. The Fashion Workers Act will finally give models, photographers, makeup artists and others the wage protections they desperately need and deserve. Freelancers Union is proud to support the Model Alliance and Senator Hoylman in their efforts,” said Rafael Espinal, President of the Freelancers Union.

“As a former model and current class action plaintiff against several modeling agencies in New York City, it’s evident now more than ever, models and creative workers in the fashion industry are long overdue basic labor protections that every worker deserves,” said former model Alex Shanklin, a named plaintiff in a class action lawsuit against Wilhelmina.

“Having worked for the most prestigious modeling agencies in New York City for over twenty five years, I have experienced firsthand how insidious and corrupt the fashion business – specifically the modeling industry is. Abusive practices, from rampant wage theft, sexual abuse and exploitation, enabling drug addictions and sex trafficking are only a few of the nightmares that models of all ages have to endure if they are represented by a corrupt agency. Most models are manipulated by agencies to sign contracts while being told that they will become ‘stars’ when in reality statistics show that models are thrown into exorbitant debt because there are no legal safety nets or protection in the modeling industry. Change is long overdue, and I’m proud to stand with the Model Alliance in support of the Fashion Workers Act,” said former top modeling agent Carolyn Kramer.

“It’s unfathomable that the faces of the fashion industry and the creative minds behind it are in fact afforded so few protections. The Fashion Workers Act will help put those essential rights in place, which will be a crucial step forward for the fashion world and set a new bar for the creative industry at large,” said model Nova Hagel.

“In my more than decade-long career as a fashion model, I never once received a receipt for any of the thousands of dollars in random deductions I found on statements from my agencies. I quickly learned not to expect financial transparency and that there were no checks and balances. I learned that $1200 a month would be deducted from my account to pay for the bunk bed I slept in, in a bedroom I shared with four other models. I learned not to expect payment for jobs I had already done; and I learned not to ask questions for fear of retaliation. This bill is long overdue and I am proud to stand with Model Alliance and Senator Hoylman in supporting it,” said model-turned-director Shaina Danziger.

“I believe in this bill because as a ‘veteran’ of this industry, I have watched agents turn from people who managed and planned career strategies, who were concerned about our well-being as artists and our ability to have good long careers. To mass marketing ‘bookers’ who take massive fees for just responding to an email, to having to beg for your money, on invoices outstanding for as long as 6 months, I know artists who have waited up to a year, and still do not receive their money on work they have done. I have often worked overtime without compensation, or been told by my representative to ‘leave it alone’ without proper negotiation and standards our livelihoods are compromised. Our health is compromised, safety and injuries are overlooked because we are ‘freelance’ this cannot continue,” said Dawn Jacobson, hair & makeup artist.

“Creating equity and fairness for the models, influencers, make-up artists and other contractors is a long journey; but this bill is the first step in the right direction to close a vast amount of loopholes designed to take advantage of those upon whose back the industry is built. A $2.5 Trillion a year industry can afford to restore the basic rights and sense of human decency for these impacted groups,” said model Kenny Sale.

“I’m tired of the loopholes in the fashion industry that leave models in cycles of debt and enrich everyone else. We must be treated equally and hold everyone accountable to the same standards of any other workplace,” said model Ambra Battilana Gutierrez.

“As a stylist who has worked in NYC for over twenty years, I have seen first hand how so many modeling agencies and creative artist agencies have taken advantage of their talent with their lack of financial transparency and shady business practices. It’s been the Wild West for far too long. The Fashion Workers Act would work to end the exploitation of models and creative artists alike in ways our industry so desperately needs,” said stylist Rachel Gilman.

“This bill is so important because it will completely change the way models and creatives are able to manage their careers. As a creative who doesn’t work with a management company, but was a former model, the night-and-day difference in terms of being able to get full transparency of my finances and have full ownership of my career is life-changing. All workers deserve these basic protections to ensure they’re making the best choices for themselves,” said model Meredith Hattam.

Founded in 2012, the Model Alliance has been at the forefront of advancing labor rights in the fashion industry for the last decade.

Through strategic research, policy initiatives, and campaigns, the Model Alliance aims to promote fair treatment, equal opportunity, and more sustainable practices in the fashion industry, from the runway to the factory floor.

The Model Alliance has championed multiple pieces of legislation, including the Child Model Act in New York and the Talent Protections Act in California.

The organization also runs the world’s only industry-specific support line, MA Support. In 2021, the organization received the first Positive Social Influence Award from the Council of Fashion Designers of America at the CFDA Awards.