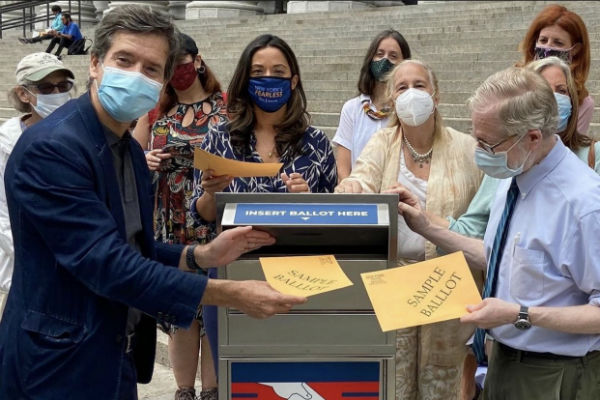 The legislation was sponsored by Senator Brad Hoylman (D/WFP-Manhattan), the ballot drop boxes have been proven to be a secure, reliable option in at least 33 states and the District of Columbia, and have been widely used for years in states that conduct their elections entirely by mail such as Colorado, Hawaii, Oregon, Utah, and Washington.

Senator Hoylman said: “In the most recent elections, some New Yorkers stood on line for as long as five hours to cast their ballots. With today’s vote, New York is one step closer to joining the at least 33 states and the District of Columbia that reduce wait times and make voting easier and safer by deploying secure drop boxes as an option for returning absentee ballots. Thank you to Senate Majority Leader Andrea Stewart-Cousins for prioritizing legislation that protects our democracy, while others desperately attempt to undermine the power of the vote. I look forward to continuing to work with Assemblymember Dick Gottfried to enshrine this legislation into law.”

On August 31, 2020,  Senator Hoylman, Assemblymember Gottfried, and other elected officials from New York City gathered on the steps of the Farley Post Office Building in Manhattan with a prototype of a secure ballot drop box to grow support for this legislation.

This past summer the  U.S. Department of Homeland Security issued guidance to state and local election officials on how to conduct secure elections during the pandemic that called drop boxes a “secure and convenient means for voters to return their mail ballot.”

The legislation passed today would do the following:

More than 84,000 absentee ballots were invalidated during the June 2020 Democratic primary election in New York City: a stunning 21% of all ballots received by the NYC Board of Elections.

Many ballots were invalidated for reasons related to the mail-in process, such as lack of an appropriate postmark or late arrival due to delays.