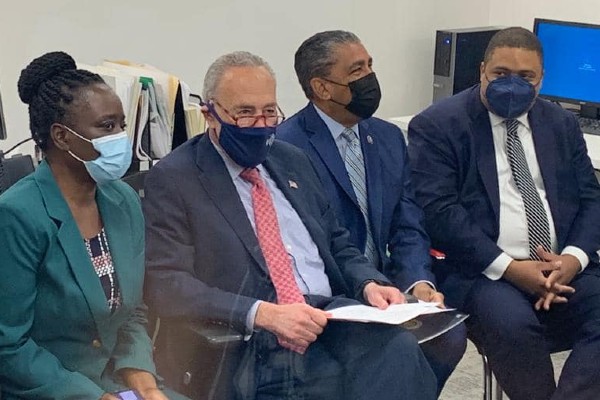 Manhattan District Attorney-Elect Alvin Bragg and others advocated for at least $5 billion in funding for community-based violence intervention programs to be included in the Build Back Better Act. They said that communities across the country, like East Harlem, are experiencing a historic increase in gun violence, and to combat this epidemic, the federal government must invest in community violence intervention programs.

Community-based violence intervention programs apply a localized approach to gun violence prevention, identifying those at the highest risk and working to reduce violence through various targeted interventions such as job training and reentry services for formerly incarcerated people.

“Gun violence remains a crisis that takes countless lives and a toll on our communities,” said U.S. Senator Charles Schumer. “Young people—especially Black and Brown young people—are disproportionately impacted by senseless gun violence. This is a crisis that we can and must solve through federal and community-led efforts like Community Violence Intervention programs. I fought to secure $350 billion in emergency funding for state and local governments in the American Rescue Plan, and some of this funding is going to directly benefit programs that will help reduce gun violence, invest in just community policing, and support programs that are proven to reduce violence. Community-based Violence Intervention programs have been effective in New York City, and that’s why I’m fighting to secure billions of inconsistent funding in the Build Back Better Act so these programs can be strengthened and expanded.”

CVI programs have been successful in reducing violence, but increased violence in the wake of the COVID-19 pandemic calls for significant federal investment in community-based strategies to reduce homicides and shootings that disproportionately impact communities of color.

Studies have shown that community-based violence intervention programs have been successful in reducing gun violence, and providing dedicated funding for these programs is critical to stopping the violence before it ever occurs in the first place.

“New Yorkers have long demanded commonsense reform to prevent the ever-growing number of gun violence and incidents around our communities,” said Congressman Adriano Espaillat (NY-13). “Addressing the epidemic of gun violence that has exacerbated during the COVID-19 pandemic will take each of us, and the Build Back Better Act will help strengthen our localized approach to supporting programs and services to stop gun violence before it occurs. I’m proud to join Senator Schumer and community leaders today to acknowledge our collective efforts to ensure federal funding and support of community-based violence intervention programs to help keep at-risk youth off the streets and help families and our communities get back on track.” 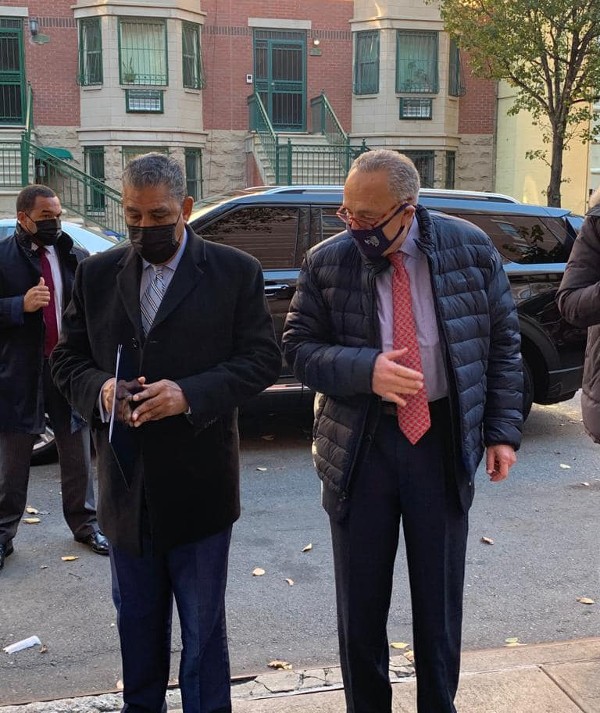 “It is no secret that gun violence disproportionately affects communities of color and violence and crime are often rooted in a sense of injustice and distrust of the government,” said Manhattan District Attorney-Elect Alvin Bragg. “That’s why we need community-based efforts to stop gun violence before it starts, and enforcement mechanisms targeted at what actually keeps Manhattan safe. I thank Senator Schumer and our Congressional delegation for their work to provide $5 billion in funding for community-based violence intervention programs, money that will save lives and make a real difference in our communities.”

Stand Against Violence East Harlem is committed to preventing gun violence and building a culture of non-violence, currently centering its work in and around the Thomas Jefferson, James W. Johnson, and Robert F. Wagner NYCHA Housing Developments in East Harlem.

SAVE’s work is guided by the principles of Cure Violence, a strategy that leverages the experiences of community members to do outreach, including people who have been directly affected by gun violence and “violence interrupters,” young people who have formerly engaged in high-risk activities who act as credible anti-violence messengers to prevent and reduce youth violence.

SAVE outreach workers and violence interrupters are trained to mediate conflicts on the street and work to deescalate disputes before crisis or violence erupts. Additionally, SAVE connects at-risk individuals to extensive networks that provide job training, employment opportunities, mental health services, and legal services that lead to long-term violence reduction in East Harlem.

He is also a member of the House Committee on Education and Labor and the Congressional Hispanic Caucus (CHC), where he serves in a leadership role as the Second Vice-Chair and is a member of the Congressional Progressive Caucus, where he serves as Deputy Whip. Representative Espaillat also currently serves as a Senior Whip of the Democratic Caucus. To find out more about Rep. Espaillat, visit online at https://espaillat.house.gov/.