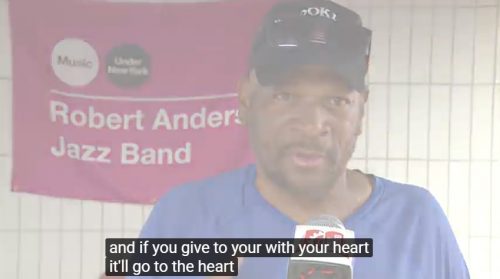 City Works, a monthly news magazine program produced by the CUNY School of Labor and Urban Studies (SLU) in collaboration with CUNY TV and hosted by Laura Flanders, will have its premiere today at 8 PM EST, Monday, October 7, 2019. The show’s mission is to create is a visual and thematic presentation of work, workers and worker organizations, employing topical examinations of the changing nature of work, tributes to unsung heroes, and analysis of the enduring challenges faced by workers. Episodes will spotlight the vast array of occupations of working people across New York City, examine the issues that confront working people on the job and in their communities, and explore individual and collective efforts to make a better life for workers and a more prosperous and equitable society.

“We have ambitious plans to increase SLU’s role as a hub for education, debate and civic engagement in New York City and beyond,” said CUNY SLU’s Founding Dean, Gregory Mantsios. “This new television program will greatly support our effort.”

The first episode will feature an interview with former New York Times labor reporter Steven Greenhouse and on-the-job profiles of a nail salon worker and one of New York’s remaining blacksmiths. It will also have a “Culture at Work” segment highlighting one of many NYC subway performers.

Here’s a promo video for the show:

The new show is a collaboration between CUNY TV and the CUNY School of Labor and Urban Studies. Gail Yancosek, the station’s Executive Director and Gregory Mantsios, the School’s Dean are executive producers. Rose Imperato is a co-producer along with Craig Thompson of CUNY TV. Carl Ginsberg is a senior consultant and scriptwriter and Paula Finn is a consulting producer.

The City University of New York’s television station, CUNY TV, has been educating and informing viewers for more than three decades.

Established in 1985, the station has steadily increased its ambition and scope, in 2009 transitioning to high definition and adding over-the-air broadcasting to its existing cable distribution. Now reaching 7.3 million broadcast households in the New York metro area, CUNY TV is committed to extending the academic mission of the university to offer lifelong learning opportunities to all New Yorkers.

The CUNY School of Labor and Urban Studies (SLU) is the 25th and the newest school at The City University of New York, the country’s third-largest university and long a standard for high quality, affordable education. They offer undergraduate, graduate degree and certificate programs designed to meet the needs of working adults as well as traditional students. Rooted in public service and social justice, they offer programs in Labor Studies and Urban Studies, to those who seek greater economic security, aspire to careers in public service and who want to train for positions of leadership in unions and community organizations. In addition, they collaborate with other schools at CUNY to offer a range of college-credit programs designed to give workers the skills needed for professional advancement.

SLU is an outgrowth of the Joseph S. Murphy Institute for Worker Education and Labor Studies, established in 1984 by CUNY in collaboration with three New York City unions. They began with 52 students. Today, the leaders of 26 labor and community organizations serve on the SLU advisory board and they continue to expand to meet the needs of outstanding leaders in New York.

They collaborate with other units of CUNY to offer a range of college-credit programs designed to give workers the academic and technical skills they need for professional advancement. Our faculty includes distinguished scholars in the social sciences as well as expert practitioners in government, labor, and public service. In addition to academic programs, SLU also sponsors research; organizes forums and conferences; and publishes a national journal, New Labor Forum: A journal of ideas, analysis, and debate.

The show will air on the first Monday of each month on Channel 75 (Spectrum/Cablevision/Optimum), Channel 30 (Verizon FIOS) or Channel 77 (RCN).