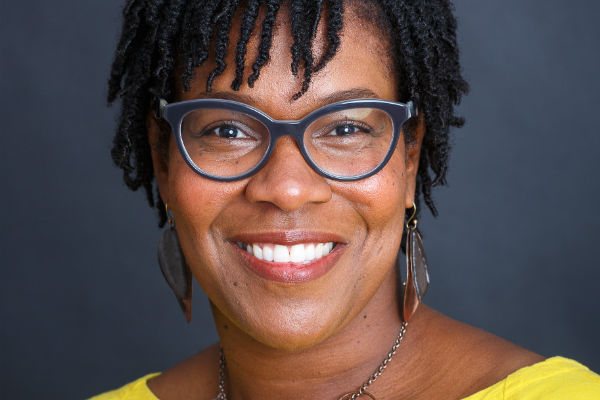 is pleased to announce Joy Bivins has been named Associate Director of Collections and Research Services.She brings nearly two decades of expert leadership and extensive curatorial knowledge following her position as the chief curator of the International African American Museum (IAAM). Her tenure at the Schomburg begins June 23, 2020.

“Joy is a creative and innovative leader who has spent her career finding ways to expand and enhance the conversation on the African Diaspora,” said Kevin Young, the Schomburg Center’s director. “As we begin our 95th year, Joy will be an integral part of overseeing, developing, and expanding our archives. Her work and the collections she will help shepherd at the Schomburg Center will shape Black history for current and future generations.”

As associate director of collections and research services, Bivins will oversee the five public service divisions of the Schomburg Center: Manuscripts, Archives, and Rare Books; Photographs and Prints; Art and Artifacts; Moving Image and Recorded Sound; and the Jean Blackwell Hutson Research and Reference Division. Additionally, she will serve as chief curator leading the charge on collection processing, acquisitions, and curatorial processes. Bivins will play a key role in ensuring the safety of materials including recent major acquisitions such as the collections of Harry Belafonte, James Baldwin, Sonny Rollins, Ruby Dee and Ossie Davis, Ann Petry, and Malcolm X.

“I’ve admired the Schomburg Center throughout my career as a student and museum professional,” Bivins said. “I’m excited to join the team to do the important work of preserving, highlighting, and sharing the achievements of people of African descent with scholars, educators and learners of all ages.”

Before joining the Schomburg Center, Bivins served as the chief curator of the International African American Museum in Charleston, South Carolina. She provided content and design oversight for its inaugural exhibitions. Prior to the IAAM, she was the director of Curatorial Affairs at the Chicago History Museum, where she oversaw and managed its team of curators and historians. Bivins began her career as an exhibition developer of Chicago History Museum’s Teen Chicago project.

The New York Public Library is a free provider of education and information for the people of New York and beyond. With 92 locations—including research and branch libraries—throughout the Bronx, Manhattan, and Staten Island, the Library offers free materials, computer access, classes, exhibitions, programming, and more to everyone from toddlers to scholars, and has seen record numbers of attendance and circulation in recent years. The New York Public Library serves nearly 18 million patrons who come through its doors annually and millions more around the globe who use its resources at nypl.org. To offer this wide array of free programming, The New York Public Library relies on both public and private funding. Learn more about how to support the Library at nypl.org/support.