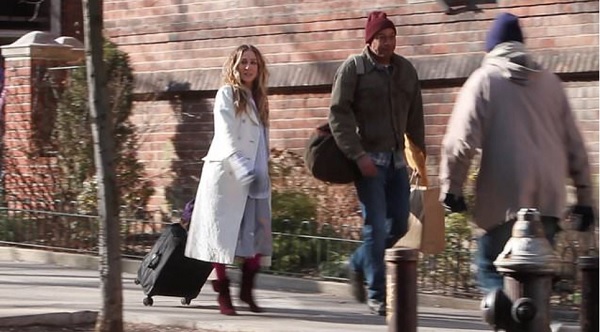 She revived her Sex And The City character Carrie Bradshaw for a new beer ad. But Sarah Jessica Parker had her mind back on her current TV gig, the HBO series Divorce when she was spotted in New York on Tuesday.

The 53-year-old was seen in an eye-popping ensemble that included an oversize blue and white striped shirt while filming Divorce in West Harlem.

The Hocus Pocus actress teamed the top with a multicolored pastel skirt, which clashed starkly against her bright purple stockings and mahogany high-heeled boots.

Sarah, who accentuated her features with makeup, rounded off the ensemble with a long pearl grey overcoat that had a powder pink lining.

In Sarah’s new ad, the Sex And The City theme plays as Carrie strolls into a restaurant, where the maitre d’ assumes she will have her usual – a cosmopolitan.

‘Nope, tonight I’ll have a Stella Artois,’ says Carrie, to which the violinists stop playing and a waiter drops a couple of glasses in shock.

She is soon joined by Jeff Bridges, who enters the restaurant in pajamas and a cardigan, reprising his The Big Lebowski role as The Dude.

The Dude declines the bartender’s offer of a White Russian and orders a ‘Stella Artoes,’ prompting Carrie to tell him: ‘Good choice,’ and toast him.

This Monday, the Today show carried a sneak preview for the ad, which will air as part of the Super Bowl broadcast this coming Sunday.

Sarah achieved icon status while starring with Kim Cattrall, Cynthia Nixon and Kristin Davis on Sex And The City, which aired on HBO from 1998 until 2004.