Santa Is “Down Wit Da King” Rev. Run Raps For The Holidays 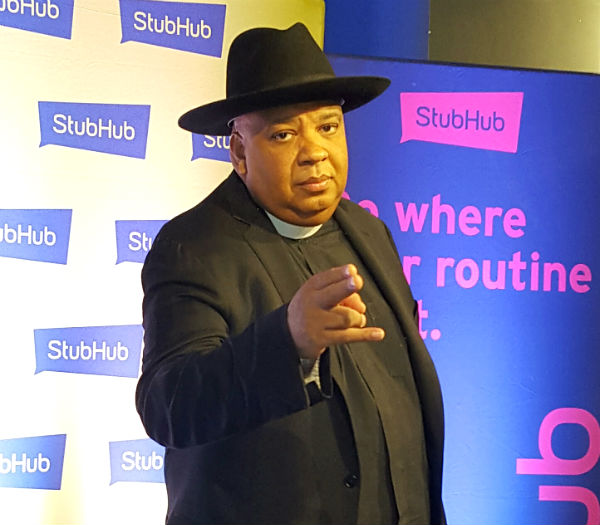 Rev. Run, one of the founding members of the iconic hip-hop group Run DMC, recently made a surprise appearance and startled shoppers at the StubHub located in NYC Times Square area. StubHub is one of the largest ticket marketers that sells concert, music, and theater events all over the country and is owned by eBay.

This season, StubHub is offering an online gift ”rapper/emcee” where shoppers will have the opportunity to create a customized rap for any event this year by legendary rapper MC Mars. Rev. Run, as an added special moment, was available to meet and greet shoppers and fans who were treated to the rare opportunity to take pictures and complete their “bucket list” to meet the legend, the king of hip-hop Rev. Run.

Hip-hop royalty-turned “man of the cloth” reality TV star, has partnered with StubHub to help make this year’s gift giving even more special as Rev Run helped shoppers pick the perfect event tickets. Shoppers were pleasantly surprised to have a customized “in-person” rap sung by one of the most famous rappers in the industry. Founded in 1981, Run DMC has sold over 15 million records in the United States alone. Rev. Run and his partners DMC (Darryl McDaniels) and the late great Jam Master Jay (Jason Mizell) are credited with being the first hip-hop sensation to bring the culture into the mainstream and changed pop music with their collaboration on a pop single titled “Walk This Way” with Aerosmith. This rare (at the time) remake union, was made possible thanks to Rick Rubin, who was a record producer and co-founder along with Russel Simmons (brother of Rev Run) and DJ Jazzy Jay of Def Jam Records. This collaboration is credited with saving the genre of pop music and the careers of Aerosmith.

StubHub is offering an online gift ”rapper/emcee” where shoppers will have the opportunity to create a customized rap for any event this year by legendary rapper MC Mars. Rev. Run added a special moment, as he was available to meet and greet ticket shoppers and fans who treated to a rare opportunity to take pictures and complete their shopping as well as their “bucket list” to meet the legend, the king of hip-hop Rev. Run.
According to StubHub, their mission is to help fans find fun. They connect fans with their favorite teams, shows and introduce them to new ones. For more information on StubHub, StubHub.com or follow @StubHub on Twitter, Facebook and Instagram or YouTube.com/StubHub

While Rev. Run remains a highly sought-after artist and motivational speaker, he remains a dynamic figure in entertainment. Today, his focus and top priorities are health and his family. Run, as he is still respectfully known as also donates millions of dollars and time to several charities – Rush Philanthropic Arts Foundation, Champions For Children and CLIC Sargent. You can follow Rev. Run on Twitter @RevRunWisdon, FaceBook: Rev. Run and on Instagram @revwon