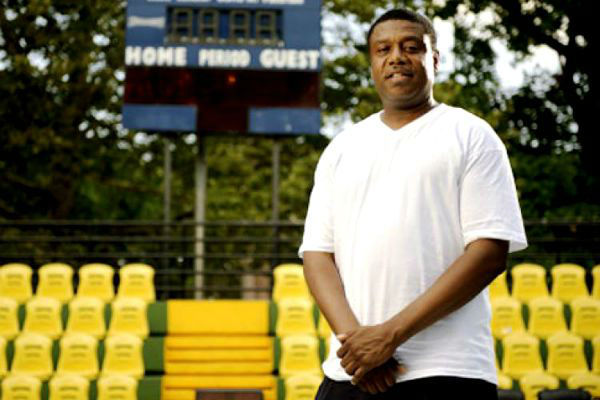 On Saturday, June 22, 2019, Harlem will be celebrating basketball returning to Rucker Park of course in Harlem, NY! Continuing in the tradition of Holcomb Rucker who founded the legendary Rucker Park basketball association in 1947 and the late Greg Marius (pictured), who in 1982 extended the brand with the creation of the Entertainers Basketball Classic (EBC), Harlem welcomes the newly formed, Rucker Park Prep as the next phase of this staple Harlem institution that has greatly served New York City and its surrounding communities.

Globally known as, “The Rucker” and hailed as the temple of street basketball; where legends and greats like Julius “Dr. J” Erving, Kareem Abdul Jabar

, Allen Iverson, Kobe Bryant have gone to earn their rites of passage. Put through the gauntlet by basketball street legends like Earl “The GOAT” Manigault, Pee Wee Kirkland, Kareem “The Best Kept Secret” Reid, Ali Moe, “A Butta” and “Skip To My Lou”. The Rucker is where NBA stars such as Vince Carter and Lebron James have sought street cred, and still more show up to be battle-tested.

Rather than “Street Ball” Rucker Park Prep is instead a 14U (and up) High School youth division that will feature the best high school players from in and around the New York tri-state area. Leading the Games will be Rucker Park Prep’s Co-Founder and Commissioner Steve Barnett, the principal authority at the Rucker who has for decades not only provided College Scholarships for hundreds of young people but has coached countless elite Basketball Players in the country. Through his efforts and commitment to youth development, many of his players have achieved the highest accolades in both university basketball of which many have gone on to play in the NBA.

“We are excited and honored to stand with Haqq and Rucker Park Prep as a presenting sponsor this summer,” said Rich Isaacson, General Manager and Executive Vice President of Def Jam Recordings

. “The Rucker and Def Jam are two New York institutions that strive to enrich the cultural fabric of this city and this community. We couldn’t imagine a better opportunity to unite, inspire and empower young people through sports, music and the one-of-a-kind vibrancy that is summer in New York City.”

On the first game day -Saturday, June 22nd, 2019, at 3:00 pm – Rucker Park Prep in conjunction with Def Jam Recording will be sponsoring a community family. A day providing free food from local Harlem vendors to all guests of the game in the park.

The game will start at 4:30 pm and will feature this county top High School teams The Patrick School vs. Upper Room. On Saturday, June 29th the Patrick School will play the Country Day School.

On Saturday, June 29th at 5:30 pm, Rucker Park Prep will be joined in a press conference with Councilwomen Inez Dickens, Harlem Assemblyman Al Taylor, State Senator Brian Benjamín as well as Borough Manhattan President Gail Brewer will be bestowing honors to the following: Def Jam Recordings, The Greg Marius Family, Darold “D- Ferg” Thomas who is the father platinum Polo Ground Entertainment/Sony recording artist and Harlem native A$AP Ferg; Adrian “A Butta” Walton, considered one of the Greatest Street Ball Players in Rucker History and The Legendary Longtime Rucker Park Coach Bob McCullagh Founder of Each One Teach One, who has both played and coached at the Rucker Games for over fifty years.

As the Rucker can an also be credited with birthing stars like Stephon Marbury, Cal Ramsey, and Hall of Famer, Nate “Tiny” Archibald. Similarly, Rucker Park Prep aims to help youth in the New York tri-state area earn more access to scholarships and other opportunities for exposure. Furthermore, the goal and objective of Rucker Park Prep is to enable students to excel in all areas of their high school experience, academically, socially as well as athletically.

Through Rucker Park Prep Foundation, Life skills workshops combined with high-level basketball instruction will aid in the building of character and help instill core values such as integrity, hard work, perseverance, self-confidence, personal responsibility, leadership, respect for the game, and overall sportsmanship. Rucker Park Prep will strive to be a resource, both for students and parents, serving as a guide to help families navigate through the pitfalls and challenges that prevent student-athletes from reaching their full potential. By taking a holistic approach to sports education and training, our goal is to help create the next generation of leaders inside and outside of the sports arena.