Riverside Drive, The Home Of Ellison, Gershwin, Hearst And Others In West Harlem 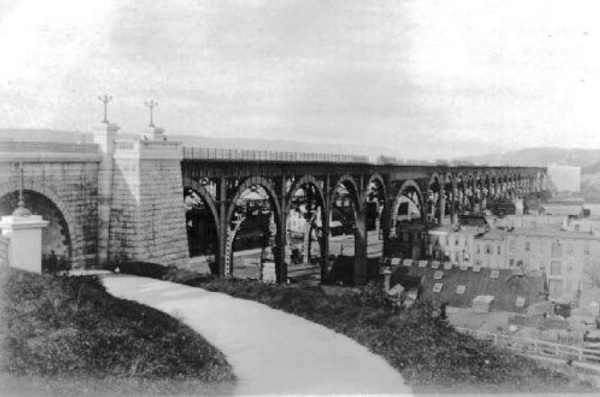 Riverside Drive is a scenic north-south thoroughfare from Harlem to Houston. The boulevard runs on the Upper West Side of Manhattan, generally parallel to the Hudson River from 72nd Street to near the George Washington Bridge at 181st Street. North of 96th Street, Riverside Drive is a wide divided boulevard. At several locations, a serpentine local street diverges from the main road, providing access to the residential buildings. Some of the city’s most coveted addresses are located along its route.

The 191 acres of land in the original park between 72nd to 125th Streets were originally inhabited by the Lenape people, but by the 18th century were used for farms. In 1846, the Hudson River Railroad (later the West Side Line and Hudson Line) was built along the waterfront, connecting New York City to Albany. In 1865, Central Park commissioner William R. Martin put forth the first proposal for a riverside park along the Hudson River. An act providing for such was presented to the Legislature by commissioner Andrew Haswell Green in 1866 and approved the same year. The first segment of Riverside Park was acquired through condemnation in 1872. The park also included the construction of Riverside Drive (then known as Riverside Avenue), a tree-lined drive curving around the valleys and rock outcroppings, overlooking the future park and the waterfront. The avenue was laid out in 1868 and was 100 feet (30 m) wide for its entire length. The plans for Riverside Park and Avenue brought the attention of William M. Tweed, who bought several lots adjacent to the park in anticipation of its construction.

A selection process for the designers of Riverside Park followed, and in 1873 the commissioners selected Frederick Law Olmsted, a park commissioner who had also designed Central Park. Initially, Riverside Avenue had been planned to run in a straight line, which would have required a retaining wall and extensive fill. By then, the difficult topography of the area had come to the attention of the Manhattan park commissioners, and in 1873 Olmsted was given the authorization to redesign the grade of Riverside Avenue. To accommodate this, Olmsted devised a new plan that would create the main road extending from 72nd to 123rd Streets, with overpasses at 79th and 96th Streets, as well as “carriage roads” to serve the nearby neighborhood. The grade of the road was not to exceed Riverside Avenue’s main road would contain two roadways, one for each direction, separated by a median. A pedestrian path and a horse path would run alongside the avenue, and trees would provide shade along the route.

Over the following years, work proceeded on Riverside Avenue, with various ramps and stairs to the park as well as a bridle path between 104th and 120th Streets. In 1876 Olmsted was asked to create plans for the design of the avenue as a country drive, but ultimately it was paved. In late 1876, bids were accepted for the paving of Riverside Avenue. Olmsted was ousted as parks superintendent in December 1877. From 1875 to 1910, architects and horticulturalists such as Calvert Vaux and Samuel Parsons laid out the stretch of park/road between 72nd and 125th Streets according to the English gardening ideal, creating the appearance that the park was an extension of the Hudson River Valley. The avenue was opened in 1880 and was well-used by walkers, bikers, and drivers. The viaduct across 96th Street remained incomplete until 1902. In 1908, the avenue was renamed Riverside Drive.

In the 1930s, New York Central Railroad’s rail track north of 72nd Street was covered in a Robert Moses project called the West Side Improvement. The project, which was bigger than the Hoover Dam project, created the Henry Hudson Parkway and buried the West Side Line in the Freedom Tunnel. It was so skillfully done that many believe the park and road are set on a natural slope. Moses’ biographer Robert Caro envisaged Moses surveying the area before his project, finding:

a wasteland six miles (10 km) long, stretching from where he stood all the way north to 181st street…The ‘park’ was nothing but a vast low-lying mass of dirt and mud. Unpainted, rusting, jagged wire fences along the tracks barred the city from its waterfront…The engines that pulled trains along the tracks burned coal or oil; from their smokestacks a dense black smog rose toward the apartment houses, coating windowsills with grit…[a stench] seemed to hang over Riverside Drive endlessly after each passage of a train carrying south to the slaughterhouses in downtown Manhattan carload after carload of cattle and pigs.

In the 1980s Donald Trump, then owner of the 57 acres (230,000 m2) of land just south of Riverside Park that had been the Penn Central freight rail yard, proposed a very large real estate development project. However, hampered by his weakened financial condition and opposed by six civic groups (Municipal Art Society, Natural Resources Defense Council, The Parks Council, Regional Plan Association, Riverside Park Fund, and Westpride), Trump agreed in 1990 to their plan, which was designed to mimic Riverside Park and Drive further north. Though scaled-down, the project is still the second-biggest private real estate venture under construction in New York City. The agreed-upon plan would expand Riverside Park by 23 acres (93,000 m2) and extend Riverside Drive to the south as Riverside Boulevard.

Riverside Drive terminated at Grant’s Tomb in a cul-de-sac, prior to the construction of the Manhattan Valley viaduct, spanning 125th Street, completed in 1900. North of 158th Street the right of way which currently carries the name Riverside Drive was known as Boulevard Lafayette, which led to Plaza Lafayette in Hudson Heights. The section exiting the parkway at the Dyckman Street exit and ending at Broadway is still known as Riverside Drive.

Riverside Park, part of the Manhattan Waterfront Greenway, is a scenic waterfront public park on a narrow 4 miles (6.4 km) strip of land between the Hudson River and Riverside Drive. It is approximately 266.971 acres (108 ha). The new Riverside Park South, stretching between 72nd and 59th streets, is the central element of the Riverside South development. Portions of the former rail yard, such as the New York Central Railroad 69th Street Transfer Bridge, are incorporated into the new park.

The elevated steel highway of the Riverside Drive Viaduct, built-in 1901, runs between Tiemann Place and 135th Street above Twelfth Avenue. It is shouldered by masonry approaches, though the span proper was made of open hearth medium steel, comprising twenty-six spans, or bays. The south and north approaches are of rock-faced Mohawk Valley limestone with Maine granite trimmings, the face work being of coursed ashlar. The girders over Manhattan Street (now 125th Street) were the largest ever built at the time. The broad plaza effect of the south approach was designed to impart deliberate grandeur to the natural terminus of much of Riverside Drive’s traffic as well as to give full advantage to the vista overlooking the Hudson River and New Jersey Palisades to the west.

F. Stuart Williamson was the chief engineer for the viaduct, which constituted a feat of engineering technology. Despite the viaduct’s important utilitarian role as a highway, the structure was also a strong symbol of civic pride, inspired by America’s late 19th-century City Beautiful movement. The viaduct’s original roadway, wide pedestrian walks and overall design were sumptuously ornamented, creating a prime example of public works that married form and function. An issue of the Scientific American magazine in 1900 remarked that the Riverside Drive Viaduct’s completion afforded New Yorkers “a continuous drive of ten miles along the picturesque banks of the Hudson and Harlem Rivers.” The viaduct underwent a two-year-long reconstruction in 1961 and another in 1987.

The eastern side of Riverside Drive, once a series of luxuriously finished rowhouses interspersed with free-standing nineteenth-century mansions set in large lawns, today is lined with luxury apartment buildings and some remaining townhouses from 72nd to 118th Streets.

The brick-faced Schwab House occupies the site of “Riverside”, built for steel magnate Charles M. Schwab, formerly the grandest and most ambitious house ever built on the island of Manhattan. Among the more eye-catching apartment houses are the curved facades of The Colosseum and The Paterno and the Cliff-Dwellers Apartments at 96th Street, with mountain lions and buffalo skulls on its friezes. The Henry Codman Potter house at 89th Street is one of the few remaining mansions on Riverside Drive; it houses Yeshiva Chofetz Chaim. 310 Riverside Drive, a landmarked 24-story Art Deco skyscraper, is near Columbia University and the 370 Riverside Drive building, which was erected in 1922–23 for approximately $800,000 by Simon Schwartz and Arthur Gross.

Among the monuments along its route are the Eleanor Roosevelt Monument at 72nd Street, the Soldiers’ and Sailors’ Monument at 89th Street, Anna Hyatt Huntington’s Joan of Arc at 93rd Street, a monument to John Merven Carrère by Thomas Hastings at 99th Street, Attilio Piccirilli’s Fireman’s Memorial at 100th Street, and Grant’s Tomb.