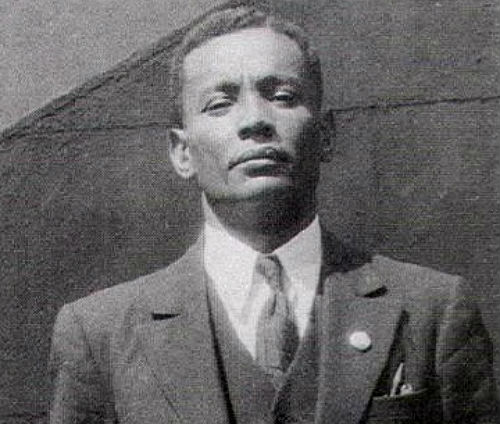 Richard Benjamin Moore, 1893–1978, was an African-Caribbean civil rights activist and prominent communist. He was also one of the advocates of the term African American as opposed to Negro.

Richard Benjamin Moore was a Barbadian writer born on 9 August 1893 in Barbados, West Indies, to Richard Henry Moore and Josephine Thorne Moore. In Barbados, the Richard Henry and Josephine Moore family was considered middle class in terms of socioeconomic status. Richard Henry Moore was the moneymaker of the family working as a preacher and building contractor in Barbados. Unfortunately, tragedy struck when Richard B. Moore’s mother died when he was only three years of age. Moore’s father was later remarried to Elizabeth Mclean. Soon thereafter, another tragedy struck when Moore’s father died in 1902 when young Richard was at the age of nine. With both biological parents dead, Moore was raised by his stepmother Elizabeth Mclean.

Mclean wanted to carry out Richard senior’s wishes of giving young Richard the best education. It is for this reason that Mclean aided young Richard in traveling to the United States. In hopes of furthering his education, Moore migrated to The United States of America and arrived in Harlem, New York on 4 July 1909.  However, Moore would not become a naturalized citizen until 11 September 1924. Although African Americans were free in the United States, they were far from being treated equally to the whites in America. Moore was immediately faced with racial discrimination when it came to employment and educational opportunities among other things. Although trained in Barbados to do clerical work, Moore was forced to turn to the more unfavorable jobs like an elevator operator and work in a silk manufacturing firm. They became some of the earliest blacks to settle in Harlem, New York, an emerging milieu of social, political, and Black Nationalist activism.

Harlem introduced Moore to the realities of European colonialism in Africa and the Caribbean, as well as the injustices of Jim Crow and lynching in the American South. By his 22nd birthday Moore became a follower of Socialist and fellow West Indian émigré Hubert Henry Harrison. He became active in the 21st Assembly District Socialist Club in Harlem in 1915.

By 1918 Moore was well known in Harlem through his speeches on street corners and in lecture halls where he combined elements of Black Nationalism and Marxism.  His second wife, Lodie Biggs, joined him in this effort.

Due to the struggles that Moore encountered and observed, he became a strong vocalist for the rights of African-Americans. In 1919 Moore joined the African Blood Brotherhood (ABB) which was an organization formed to defend African Americans from race riots and lynching. Now considered one of the most radical black activists in the nation, in 1920 Moore was named by the U.S. Justice Department as a possible candidate for deportation. Nonetheless, he and partner W. A. Domingo launched The Emancipator, a magazine devoted to Marxism as the liberating ideology for African America. Moore, Hubert Harrison along with other black advocates, become the first to join the Communist Party in the early 1920s. Moore joined the Communist Party, in part, because at the time the Communist party was transforming itself into a force to fight against segregation. Authors Joyce Moore Turner and W. Burghart Turner, called Richard B. Moore, the Richard B. Moore: Caribbean Miltant in Harlem, in their book by the same name.

Moore was a frequent political candidate of the Communist Party. In 1928 he ran for U.S. Congress in New York’s 21st Congressional District. In 1934, Moore ran on the Communist ticket for Chief Judge of the New York Court of Appeals. In 1935, he became the organizer for the International Labor Defense in the New England Territory. He used his position in this organization to speak on behalf the Scottsboro Boys, which was a case were nine young African American males were accused of brutally raping two young white girls. In 1942, Moore was expelled from the communist party because he was accused of being a Black Nationalist and keeping black issues on the front burner.

Moore continued his efforts for equal rights in America. He also played a leading role in Caribbean advocacy groups. Moore, like his friend Hubert Harrison, was a bibliophile collecting over 15,000 books and pamphlets on the black experiences worldwide. This collection of books is currently housed in a library that Moore developed in Barbados. Moore also ran the Frederick Douglass Book Center in Harlem.

Along with having a love of books, Moore published a few himself including The Name Negro, Its Origin and Evil Use (1960) and Caribs, Cannibals and Human Relations (1972). He also had essays and articles published in various magazines and journals including the Negro Champion, Daily Worker, and Freedomways.

Richard Benjamin Moore died in his homeland of Barbados in 1978 at the age of 85 (source).