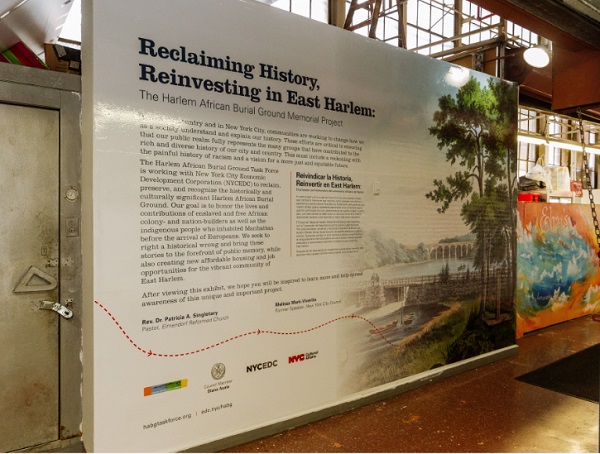 The event celebrated the opening of “Reclaiming History, Reinvesting in East Harlem”, a free exhibition at the La Marqueta public market in East Harlem. The exhibition showcases the history of the Harlem African Burial Ground dating back to the 17th century and the planned creation of a permanent memorial and cultural center as part of the mixed-use redevelopment of the former MTA 126th Street Bus Depot. The exhibition will remain open to the public at La Marqueta through the summer during normal business hours.

The event also featured a panel discussion moderated by Sharon Wilkins, Manhattan Deputy Borough Historian and Harlem African Burial Ground Task Force member. Also participating were Tom Finkelpearl, DCLA Commissioner and Co-Chair of the Mayoral Advisory Commission on City Art, Monuments, and Markers; Joy Bailey-Bryant, Vice President at Lord Cultural Resources, and Justin Garrett Moore, Executive Director of the Public Design Commission. The panelists engaged in a rich and candid conversation with the audience about the evolving role of memorials in cities and the importance of community and cultural engagement to portraying an inclusive public history.

“The Harlem African Burial Ground exhibition marks an essential piece of our city’s history by honoring the New Yorkers of African descent who were buried there,” said James Patchett, President and CEO of NYCEDC. “We’re grateful for our partnership with Council Member Ayala, the Harlem African Burial Ground Task Force, and our partner agencies to make this history accessible to Harlem residents and all New Yorkers. We look forward to building a permanent memorial and cultural center to honor the rich history of this sacred site, while bringing much-needed affordable housing, community space and good jobs to the East Harlem.” 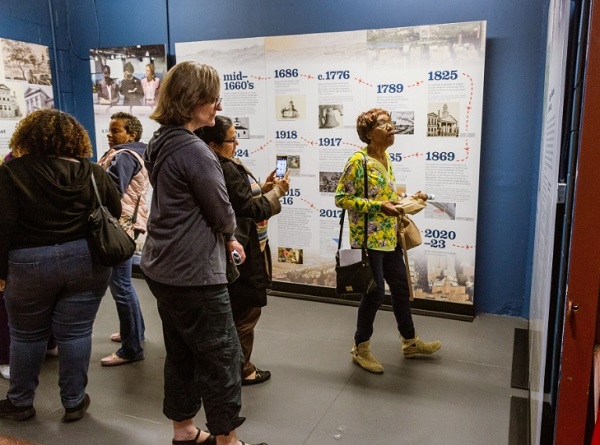 “The Harlem African Burial Ground gives us a once-in-a-generation opportunity to reflect on and remember a critical piece of New York’s past,” said Cultural Affairs Commissioner Tom Finkelpearl. “We look forward to working with the community leaders that envisioned this extraordinary project both to commemorate the early black community that thrived here, and to give this story new life for contemporary New Yorkers.”

“I am proud to have co-sponsored “Reclaiming History, Reinvesting in East Harlem” with EDC, DCLA, and the Harlem African Burial Ground Task Force, as this exhibit locally showcases rich African American history,” said Council Member Diana Ayala. “I would like to thank Reverend Dr. Patricia A Singletary and my predecessor, Melissa Mark-Viverito, both of whom co-chair the task force that has played an instrumental role in ensuring this history was preserved and celebrated. I look forward to the creation of the memorial project that will honor this sacred site, as well as the affordable housing, local jobs, and community space that will follow.”

Since 2015, NYCEDC has worked in partnership with the Harlem African Burial Ground Task Force, Manhattan Community Board 11, and elected officials to establish goals for the redevelopment of the now vacant 126th Street Bus Depot, which occupies an entire city block. A portion of the land was once the site of an African burial ground dating back to the original Dutch settlement of Nieuw Haarlem in the 17th century. The Harlem African Burial Ground Task Force is co-chaired by Rev. Dr. Patricia A. Singletary of Elmendorf Reformed Church and former City Council Speaker Melissa Mark-Viverito. In 2016, the project’s robust community planning process was awarded the Mark E. Mack Community Engagement Award by the Society for Historical Archeology.

On September 27, 2017, the New York City Council voted unanimously to approve a land use application that facilitates the creation of the memorial and redevelopment of the larger Bus Depot site. After the ULURP process concluded, the site was placed on the National Register of Historic Places.

The 126th Street Harlem African Burial Ground Memorial and Mixed-Use Project will create a permanent outdoor memorial and cultural center. The memorial will be located on the historic boundary of the Burial Ground, and there will be no development within this 18,000-square-foot area. The project will also include over 500 affordable homes for low-income families as well as job-generating commercial space, a plan to train and hire East Harlem residents, and City capital funding for construction of the memorial and a permanent source of funding for its operations.

Later this year, NYCEDC and DCLA expect to release a Request for Expressions of Interest (RFEI) seeking a nonprofit operator to oversee the future memorial and cultural center. After an operator is selected, NYCEDC will release a Request for Proposals (RFP) to select a development team. These important steps will be taken in close consultation with the Harlem African Burial Ground Task Force, Council Member Ayala, and community stakeholders. 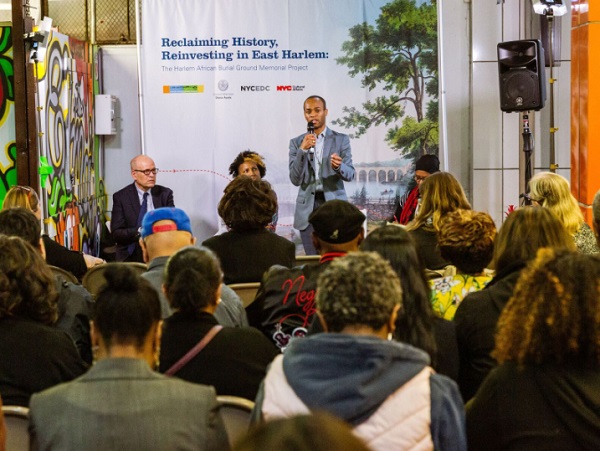 The New York City Department of Cultural Affairs (DCLA) is dedicated to supporting and strengthening New York City’s vibrant cultural life. DCLA works to promote and advocate for quality arts programming and to articulate the contribution made by the cultural community to the City’s vitality. The Department represents and serves nonprofit cultural organizations involved in the visual, literary, and performing arts; public-oriented science and humanities institutions including zoos, botanical gardens, and historic and preservation societies; and creative artists at all skill levels who live and work within the City’s five boroughs. DCLA also provides donated materials for arts programs offered by the public schools and cultural and social service groups, and commissions permanent works of public art at City-funded construction projects throughout the five boroughs.