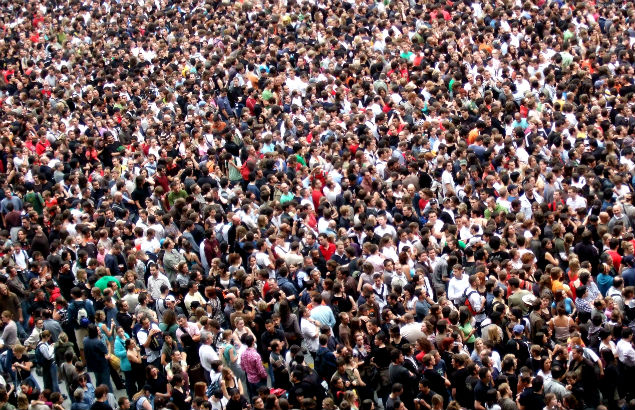 found this report from Nielsen in 2018, regarding Black consumers from Harlem to Hollis speaking directly to brands in unprecedented ways and achieving headline-making results. Throughout 2017, popular brands witnessed the power of Black Twitter

and the brand impact of socially conscious Black consumers. Through social media, Black consumers have brokered a seat at the table and are demanding that brands and marketers speak to them in ways that resonate culturally and experientially—if these brands want their business. And with African Americans spending $1.2 trillion annually, brands have a lot to lose.

Diving into the dollars Spent

Black consumers and consumers of color alike are making considerable contributions to the overall market—in some cases representing more than 50% of the overall spending in key product categories. For example, half of the total spend ($941 million) on dry grains and vegetables in the U.S. in 2017 came from consumers of color. And Black consumers represented $147 million of the total spend in this category, which has recently made advances in product creation to meet the demands of their diverse buyers. 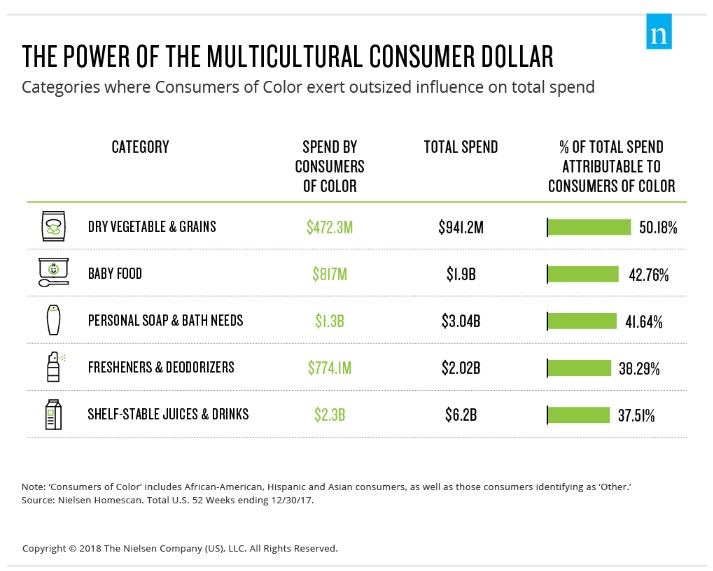 Mainstream manufacturers across other industries are also seizing the opportunity to create specific products that appeal to diverse consumers. Not so surprisingly, African Americans have cornered the ethnic hair and beauty market, ringing up $54 million of the $63 million total industry spend in 2017. But marketers should find it interesting that Black consumers aren’t just spending on products created specifically to appeal to them. In fact, in terms of sheer dollars, African Americans spent considerably more money in the general beauty marketplace last year. Black shoppers spent $473 million in total hair care (a $4.2 billion industry) and made other significant investments in personal appearance products, such as grooming aids ($127 million out of $889 million) and skin care preparations ($465 million out of $3 billion).

African Americans makeup 14% of the U.S. population but have outsized influence over spending on essential items such as personal soap and bath needs ($573 million), feminine hygiene products ($54 million) and men’s toiletries ($61 million). Nielsen research also shows Black consumers spent $810 million on bottled water (15% of overall spending) and $587 million on refrigerated drinks (17% of overall spending). Luxury, non-essential products such as women’s fragrances ($151 million of a $679 million industry total), watches and timepieces ($60 million of $385 million in overall spending) and even children’s cologne ($4 million out of $27 million) also play well to an audience that’s keen on image and self care.

“Our research shows that Black consumer choices have a ‘cool factor’ that has created a halo effect, influencing not just consumers of color but the mainstream as well,” said Cheryl Grace, Senior Vice President of U.S. Strategic Community Alliances and Consumer Engagement, Nielsen. “These figures show that investment by multinational conglomerates in R&D to develop products and marketing that appeal to diverse consumers is, indeed, paying off handsomely.” 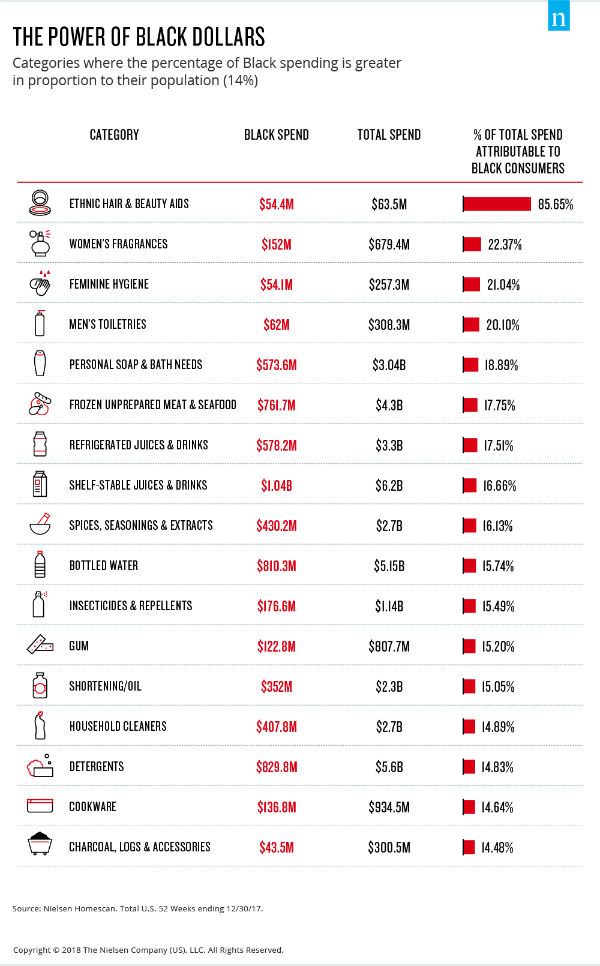 Companies should take notice of even the subtle shifts in spending because black consumer brand loyalty is contingent upon a brand’s perception as authentic, culturally relevant, socially conscious and responsible. In fact, 38% of African Americans between the ages of 18 and 34 and 41% of those aged 35 or older say they expect the brands they buy to support social causes, 4% and 15% more than their total population counterparts, respectively. Moreover, Black consumers’ brand preferences are increasingly becoming mainstream choices, which illustrates that the investment in connecting with Black consumers can often yield sizeable general market returns. For instance, sizable Black spend in health and beauty categories has contributed to a diversification of product offerings that appeal not only to Black consumers but to the general market as well.

Black consumers account for a disproportionate amount of product sales in a number of fast-moving consumer goods categories. Again, with $1.2 trillion in spending power, African-American consumers are an important population for smart brands that want to grow market share and brand preference. More importantly, the data suggests that Black consumer spending already significantly affects the bottom line in many categories and industries, and brands can’t afford to lose favor or traction with this segment without potential negative impact.

The enormous buying potential of Black consumers has put a spotlight on many popular brands’ ability to navigate the nuances of culturally relevant and socially conscious marketing. African Americans are more likely than non-Hispanic white peers to interact with brands on social media or to use social networks to support companies and brands (44% more likely). As the almost nuclear power of social media collides with an increasingly educated, affluent, tech-savvy black consumer base, there’s never been a more critical time for companies to build and sustain deeper, more meaningful connections with black consumers—not only to grow their relationships but to protect them.

“When it comes to African-American consumer spend, there are millions, sometimes billions of dollars in revenue at stake,” said Andrew McCaskill, Senior Vice President, Global Communications and Multicultural Marketing, Nielsen. “With 43% of the 75 million Millennials in the U.S. identifying as African American, Hispanic or Asian, if a brand doesn’t have a multicultural strategy, it doesn’t have a growth strategy. The business case for multicultural outreach is clear. African-American consumers and all diverse consumers want to see themselves authentically represented in marketing, and they want brands to recognize their value to the bottom-line.”

Insights in this article were derived from Nielsen Homescan, Total U.S., for the 52 weeks ending Dec. 30, 2017.

Nielsen is a global measurement and data analytics company that provides the most complete and trusted view available of consumers and markets worldwide.