Remix: Behold, The Dance Theatre Of Harlem Dances Through The Streets Of Harlem 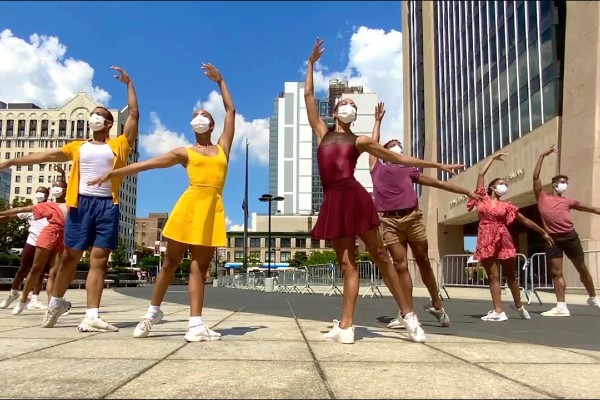 It’s nearly impossible to find an unblemished square of pavement from Harlem to Hollis, Queens.

Unless the concrete was poured within the last day or two, count on each square to boast at least one dark polka dot, an echo of casually discarded chewing gum.

Confirm for yourself with a quick peek beneath the exuberant feet of Harlem’s the Dance Theatre of Harlem company members performing on the plaza of the Adam Clayton Powell Jr. State Office Building during the 46th annual Harlem Week festival 2020.

Eight company members, including co-producers Derek Brockington and Alexandra Hutchinson, hit the streets, to be filmed dancing throughout Harlem.

Those who gripe about the discomfort of wearing a mask while exerting themselves should shut their traps until they’ve performed ballet on the platform of the 145th and St. Nicholas Subway Station, where the dancers’ pristine white shoes bring further buoyancy to the proceedings.

The Hudson River and the George Washington Bridge serve as backdrop as four young men soar along the promenade in Denny Farrell Riverbank State Park. Their casual outfits are a reminder of how company founder Arthur Mitchell, the New York City Ballet’s first black principal dancer, deliberately relaxed the dress code to accommodate young men who would have resisted tights.

The piece is an excerpt of New Bach, part of the company’s repertoire by resident choreographer and former principal dancer, Robert Garland, described in an earlier New York Times review as “an authoritative and highly imaginative blend of classical vocabulary and funk, laid out in handsome formal patterns in a well-plotted ballet.”

And in these fractious times, it’s worth noting that only one of the dancers is New York City-born and bred. The others hail from Kansas, Texas, Chicago, Louisiana, Delaware, Orange County, and upstate.

The group seizes the opportunity to amplify a much-needed public health message—wear a mask!—but it’s also a beautiful tribute to the power of the arts and the vibrant neighborhood where a world-class company was founded in a converted garage at the height of the civil rights movement.