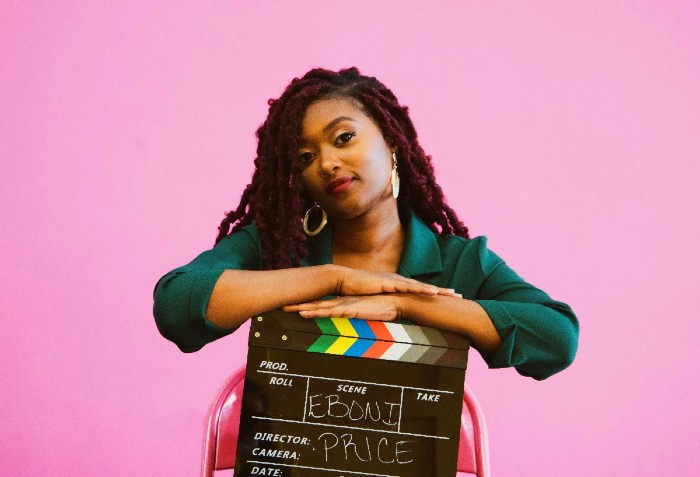 The fellowship offers creators an opportunity to produce the pilot for a web series or a short film!

“We received more than 110+ outstanding short scripts by women of color from Brooklyn to Kenya! With the COVID-19 pandemic making funding more challenging during these times for BIPOC creatives to get their projects off the ground, it was important for us to be able to give back,” says Carolyn Butts, founder of African Voices (parent company of Reel Sisters) and Reel Sisters.

Each fellow will receive $5,000, access to mentors and scholarships to Scriptwriting Essentials: The Art of Creating Strong Female Characters™ and Reel Sisters film production workshops!

Ollie, BK, and Carmichael are three girls who are NOT going back to Juvie. When given the opportunity to stay locked up or to “GROUP”, they decide to spend the summer sifting through soil and their shit. “GRO UP”, a web series, was written by a writing team of 3 BIPOC women (African American/Jamaican, Puerto Rican/Italian, and South Asian American)

Camille Simone Thomas is still looking for a concise way to define the identities that matter most to her. She’s a fifth-generation native Detroiter. A fourth-generation Black college graduate. A third-generation way maker. A second-generation oldest daughter of the oldest daughter and a half first-generation Jamaican-American. Maybe one day she’ll have a neater way to say that but being messy also defines who she is.

Camille is a creative actor,writer, and producer who believes it is her duty and her honor to tell the stories of all the various generations contained inside of her.

Currently, she is working as a teaching artist for Broadway’s Manhattan Theatre Club and Dreamyard in the Bronx as well as line producing for Moxie Theatre company and working as an Associate Artist for Sanguine Theatre Company. Follow Camille on Instagram @Camille4reel. View Camille’s website.

Nina Lucia Rodriguez is a multidisciplinary artist based out of Brooklyn, New York. She received a degree in acting and a minor in comedy (yes, that’s real) from Emerson College in 2019. Her work spans across mediums but always centers on community and authenticity.

She strives to tell truthful stories that encapsulate and enhance the communities that surround her art. A proud Latina, she works hard to represent the underrepresented and is not above squaring up to do so. Follow Nina on Instagram @ninaluciarodriguez. Visit Nina’s website.

Jasmine Sharma is a South Asian-American actor/writer/activist based in Los Angeles, and a recent graduate of Northwestern University.

Jasmine and her writing have recently been supported by AlterTheater Ensemble (First Acts commission), The Road Theatre (Under Construction 2), AGE: Ignite the Arts, Ashland New Plays Festival (New Voices), and Lime Arts Productions. Jasmine has also contributed to iWeigh, worked with the 24 Hour Plays both as an actor and writer, and serves as Script PA on several Broadway musicals.

Currently, Jasmine is commissioned by Moxie Arts NYC, Jackalope Theatre, North Shore High School, and developing her first world premiere with Shattered Globe Theatre. She is elated about bringing GRO UP: A Web Series to life with this team. jasminesharma.org | @jasminesharmaa

Twelve-year-old Javonte Freeman juggles puberty, a bully and grief while learning the rules of survival in her tough neighborhood. Check out the Trailer

Eboni Price found her passion for filmmaking as a teenager in Birmingham, AL. She directed her first short film at the age of 17.

A director/writer based in Los Angeles, CA, Eboni aims to bring authentic and profound stories of Black women to the forefront of her lens. Currently working at Shondaland, Eboni’s previous work includes projects under Bad Robot, Legendary Pictures, and BET Productions.

She has been named a 2020 Finalist in the Sidewalk Film Festival for her script “Pandemonium”, chronicling the effects of Covid on Black families and has had other work featured in Reel Sisters Film Festival, HuffPost, Shadow & Act, and Black Enterprise.

Her 2016 web series, #Adulting was named a semi-finalist in Los Angeles Cinefest and is now streaming nationwide on Tubi. Eboni is a Howard University Alumna in who she received her B.A. in Film Production. Website: www.WillFilm4Food.com.

When her mother dies, Anna, who has an Intellectual/Developmental Disability, must find a way to navigate the sudden life changes.

Her sister Molly returns to the overwhelming responsibilities of this transition and disregards Anna’s abilities. Anna must prove that despite her difficulty communicating, she knows what to do.

Liz Sargent is a Korean American Adoptee writer and director, whose award-winning work explores themes of adoption, disability and family. She has been awarded a NY Emmy, Best Director at Diversity in Cannes, Best Screenplay at Brand Film Festival London.

Her films have been released in 6 languages, screened at Venice Biennale Danza, Lincoln Center and broadcast on PBS. The short film STRANGERS’ REUNION, about an adoptee reunion, was one of five films chosen by Ritz-Carlton and Hearst to be made with mentorship by Mike Figgis and production by RSA Hong Kong.

Liz incorporates her extensive background as a choreographer trained at North Carolina School of the Arts into her commercial and experimental work alike.

Liz was a top three finalist for the SeriesFest Shondaland Directing Mentorship 2022 and a recipient of an Asian Women Giving Circle grant. Her work has been developed at UnionDocs, UCROSS and in Sundance Co/Lab workshops.

Liz is a member of NYWIFT, a judge for the IDA Awards and a producer with Cyprian Films New York in New York and Cyprus.

Founded in 1997 by African Voices magazine and LIU Brooklyn Campus, Reel Sisters is among the first film festivals dedicated to supporting women of color filmmakers.

Known for celebrating both veterans and rising stars alike, Reel Sisters has honored everyone from Radio One founder Cathy Hugues to HBO’s Insecure writer and director Issa Rae.