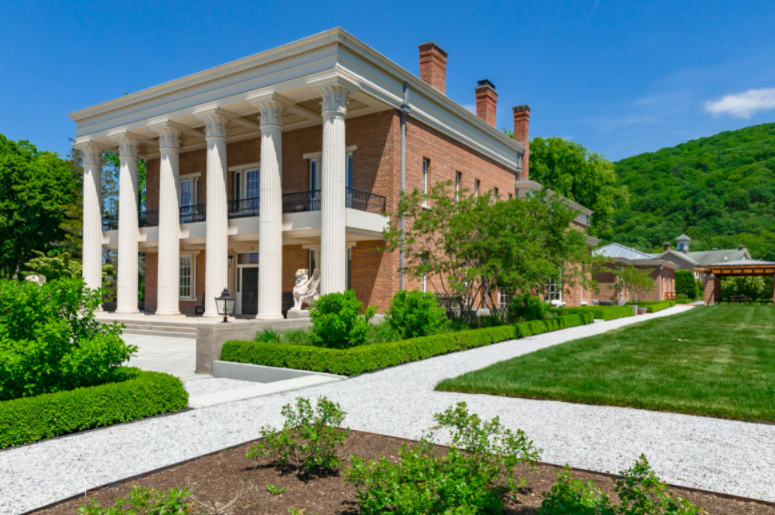 With a couple of hours from Harlem, here’s a rare-to-market historical mansion that is making waves in the real estate world for merging the past with the future in an authentic and meaningful way.

The Samuel Sloan Estate is a 16+ acre masterpiece that provides incredible views of the Catskills, West Point Academy, and the surrounding countryside along the Hudson River.

While the breathtaking property has always been noted for its beauty and design, it is now also a real estate treasure with remarkable Silver LEED® certification.

The ingenuity of the modernization is both poignant and dynamic for a homeowner looking for a planet healthy environment, in an energy-efficient but luxurious setting.

The storied fully renovated Philipstown estate is represented by Kenneth J. Moore, President of Classiques Modernes International Realty, who has listed it at $11.25 mil. “The first thing that hits you is its impressive scale. The original structure had baronial rooms that needed to be reimagined to complement today’s more intimate entertaining style. The volume remains–the soaring ceilings were kept–but the new residence now enjoys both formal and casual living spaces.”

In 2014, the façade was also changed from Italianate to Greek revival. It features a two-story portico with imposing columns serving as a foreground to a full-width second-floor loggia. 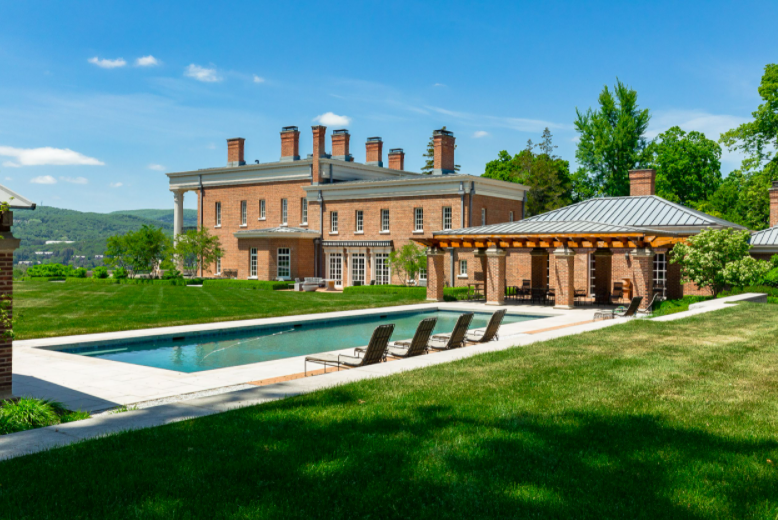 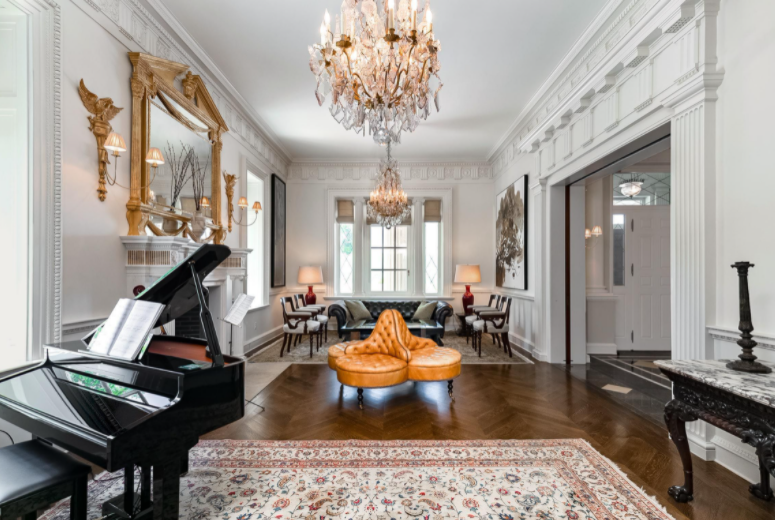 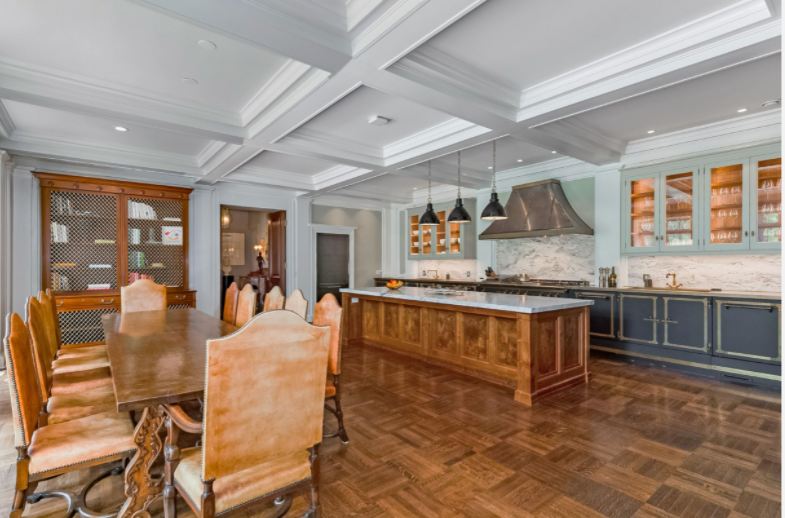 Six bedrooms, six full and three half baths, and a full floor allocated to entertaining and recreation ensure plenty of room for sumptuous living.

The 3500 sq. ft. carriage house may also be transformed into a three-story auxiliary house for guest and staff suites. 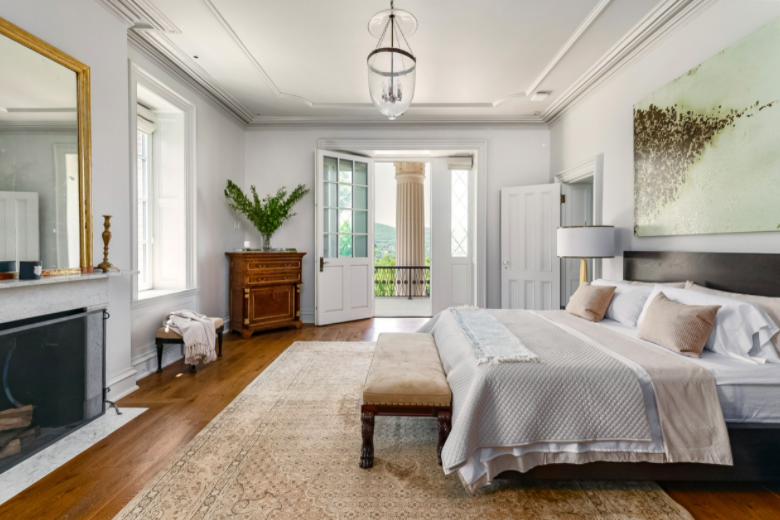 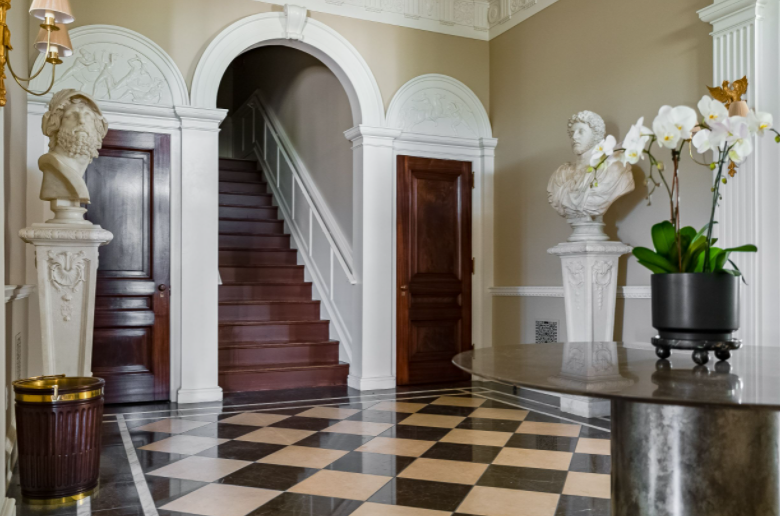 Even among best-in-class properties, the home’s innovative Silver LEED® approved upgrades make it a rare gem. “It’s a trailblazer,” observes lifestyle expert and Classiques Modernes co-founder, Loy Carlos. “The visual I often use is driving. There is a healthy balance of looking forward, of checking the rearview mirror, and of still being aware of the present. This house pays homage to its history, is equipped with the conveniences and luxuries of today, but keeps a keen eye towards the future. It promotes an evolutionary and principled lifestyle.”

Unlike most restored estates, new modifications have made operations both economical and practical. This includes maintenance-free roofing that will last 100 years. 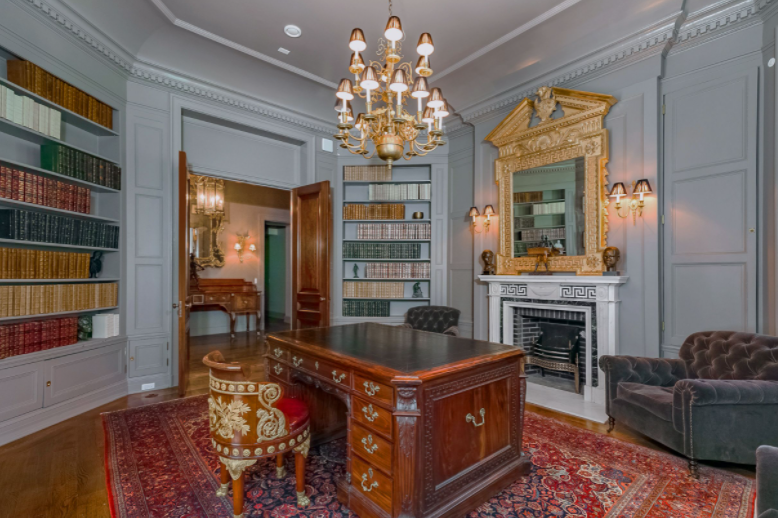 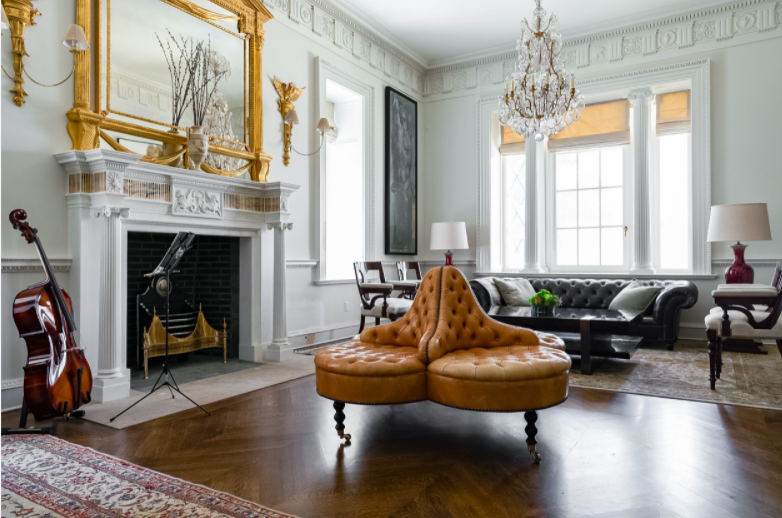 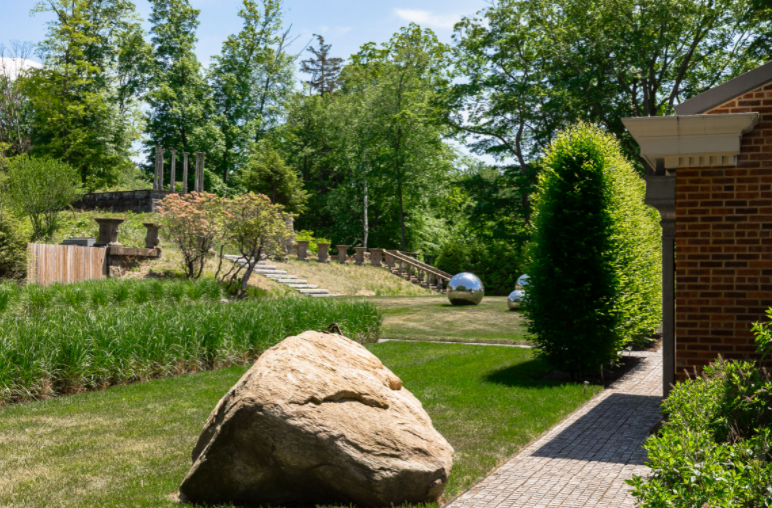 A rainwater harvesting system captures water off the roof and retains it for landscape irrigation. Solar panels provide onsite renewable power. The house also has a ground barrier that protects it from radon.

At the same time Fletcher Steele, one of the 20th century’s most glorified landscape architects, was commissioned to augment the surroundings with beautiful gardens and lookouts.

Famous among remaining exterior structures include “The Ruins,” a “Forum-inspired” area complete with columns and a weathered statue/fountain, which now overlook the newly built pool pavilion and the great lawn. But most unique of all is the 100-year old swimming pool waiting to be restored or repurposed. “The grotto reminds me of the Italian fountains and pools with water flowing from the dragon mouths at the top, down the edge over cupped hands, to the pool below,” says Moore. Adds Carlos, “Some say it reminds them of Hadrian’s pool in Tivoli. It’s not as large, but perhaps just as dramatic and breathtaking considering where we are. It’s unforgettable.”

From entertaining to weekends away from New York City just an hour away, this estate–a stone’s throw away from Bear Mountain, Cold Spring and many other destinations–simply offers so much for the nature-loving, environmentally-conscious homeowner.

This historical mansion, modernized with LEED® Certified upgrades, is not just about improvement. It serves as a stepping-stone to the future of the real estate.

The Sloan Estate is co-listed with Richard Phan of Douglas Elliman.