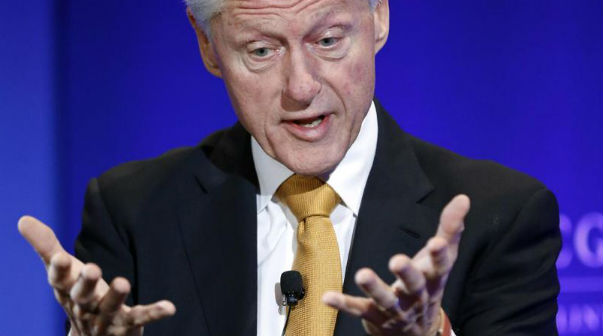 The spokesman for former President Bill Clinton issued a statement Monday denying knowledge of the alleged child sex crimes for which Jeffrey Epstein was recently arrested.

“President Clinton knows nothing about the terrible crimes Jeffrey Epstein pleaded guilty to in Florida some years ago or those with which he has been recently charged in New York,” the statement read. “In 2002 and 2003, President Clinton took a total of four trips on Jeffrey Epstein’s airplane: One to Europe, one to Asia, and two to Africa, which included stops in connection with the work of the Clinton Foundation. Staff, supporters of the Foundation, and his Secret Service detail traveled on every leg of every trip.”

“He had one meeting with Epstein in his Harlem office in 2002, and around the same time made one brief visit to Epstein’s New York apartment with a staff member and his security detail,” it continued. “He’s not spoken to Epstein in well over a decade, and has never been to Little St. James Island, Epstein’s ranch in New Mexico, or his residence in Florida.”

HuffPost reports that however, Clinton’s statement is contradicted by the actual flight manifests, which show the former president may have taken as many as 26 flights on Epstein’s plane between 2001 and 2003, The Daily Beast noted.

When Gawker first published the flight logs in 2015, it reported that Clinton shared “more than a dozen flights with a woman who federal prosecutors believe procured underage girls to sexually service Epstein and his friends and acted as a ‘potential co-conspirator’ in his crimes.”

With the five-leg Asia trip between May 22 and May 25, 2002, no Secret Service agent was listed as having traveled with Clinton.