Preserving The Social Fabric Of A Community: The Harlem Experience The different approaches to local and state history championed by Representative Tonko versus Governor Cuomo manifested itself in some recent blogs on New York History Blog and the Adirondack Alamanack.

These pieces were not written in conjunction with my post on the subject but help to flesh out on the local level what is actually at stake if the social fabric model is jettisoned on behalf of the economic/transactional model. In this blog, I focus on one event that could be replicated in communities throughout the state, specifically:

On Saturday, April 29, twelve community-based organizations held a day-long forum titled “Harlem and the Future: Preserving Culture and Sustaining History in a Changing Environment” (“Harlem and the Future”) at CUNY to discuss the changes, the best practices, and the imminent challenges that are affecting Harlem’s social fabric, built environment, and cultural heritage. Harlem’s first historic preservation conference comes at a time of change to this iconic neighborhood. The welcoming remarks were by Manhattan Borough President Gale A Brewer.

How Many Other Communities Have Had Or Should Have A Simuliar Conference?

Sessions were held throughout the day to address the issues raised in the conference notice. They may be summarized as follows:

Harlem is not just a geographic locale in Upper Manhattan, but a diverse African-American community with a rich history represented by a remarkable architectural heritage. While the success of the play “Hamilton” has led to an explosive growth in visitors headed uptown to see the Hamilton Grange historic site, the physical embodiments of Harlem’s cultural heritage have long been simultaneously celebrated and threatened. Who decides what stories are preserved and retold?  What is the cultural brand of Harlem and does it represents the community as a whole.

The musical “Hamilton” ends with “who will the story?”, the exact question challenging every community.

In response to my blog on the vanishing of local history, I received a reply from Camille Linen, creator of Flashbacks, a musical covering the 350 year history of the Town of Rye where we both live. She wrote:

Flashbacks has just become a part of the Port Chester fourth grade curriculum so Port Chester is now a grassroots exception to the Vanishing Breed title.

Maybe Flashbacks can serve as a model for others in the area, to start,

Last year we had Rye, Rye Brook and Port Chester fourth graders at the Capitol Theatre performance. The teachers were all given copies of the teacher/artist/historian written curriculum and were very pleased with the program.

This year I was unable to obtain enough funding for the theater performance, but worked to get it established on solid ground in the Port Chester district curriculum.
Using the arts to deliver local history was the deciding factor.

Let’s meet sometime over the summer to brainstorm.

Flashbacks was the subject of my post What Works: Flashback to Your Community’s Heritage. In that post, I touted the benefits of history storytelling as performance at the local level. My suggestions then and still roughly applicable today were:

Whether it is preserving the heritage of the village of Port Chester which will reach its sesquicentennial next year or of Harlem which once was a Dutch village before it became part of a larger political entity or to your own community, we need to link our youth to their local heritage through the arts.

Harlem’s built environment, from its ornate brownstones to its human-scale character, tells the story of the neighborhood’s development and evolution. Unfortunately, much of Harlem’s physical fabric has been lost to demolition, both by neglect and redevelopment, over time.

Landmark designation has proven itself to be an important tool in the fight to preserve character and manage change but it may not always be the most effective nor desirable way to protect a neighborhood. How can Harlem residents reinforce their community’s identity while also adapting to growth and development?

The reference to “physical fabric” raises an important and often overlooked component of history heritage. We exist physically and our sense of touch shouldn’t be limited to a mouse or touchscreen. People need to see, touch, and physically experience their community. This means walking, this means observing, this means touching. The brain needs the physical sensations to aid in creating the memories that will endure even when physical contact is lost. When I took teachers behind the scenes in some museums where they then could touch physical artifacts from thousands of years ago, the experience resonated and was remembered even if the artifact was simply the piece of a broken pot. Touching is part of the human experience and by separating that sensation from local history, we separate people from the past.

And what are the buildings in the community? What are their stories? For example, the Lower East Side Tenement Museum has made the stories of the people in the apartments the basis of the tourist experience. What are the stories in the buildings of your community? Here is where there are opportunities for high school senior service projects to connect students to their own community. Let them work with the local historians and preservationists to document using the technologies which are second nature to them, to tell the stories and place them on the web. When a building is demolished it is part of their heritage which is being destroyed as well. Before the refrain of “Another one bites the dust,” wipes out the past, let’s encourage the next generation to help their community to tell its story by becoming familiar with what that story is.

The beautiful stone churches of Harlem stand out as landmarks in the neighborhood. While these buildings have lasted decades, the congregants that utilized them reflect the evolving character of the community. Throughout their history, Harlem’s churches have served as a home and well-spring in shaping the neighborhood’s social dynamics. In particular, the role of the church in Harlem’s African American community is evidenced in everything from music to the civil rights movement. Today, technological and demographic shifts, both globally and locally, have reshaped the way Harlemites interact with one another and created new “congregations” outside of religious institutions. These changes leave congregants, preservationists, and residents asking what’s to become of the buildings imbued with historical, architectural, and social value.

Consider the example of a community where the old architecture is being demolished to be replaced by roads and cookie-cutter high-rise apartment complexes. The people have rallied together to save their common memory. They have created a blog with stories about 60 sites in their community. They have created an online discussion group for their community with about 100 members including local artists, architects, and scholars to discuss and plan how to preserve their community’s heritage. Many of its churches and synagogues have been destroyed. Finally it dawned on them that the surviving architectural treasures might have tourist appeal but it might be too late.

They complained that the character of their district had been destroyed. As one sociology professor put it, “Cultural preservation means nothing to real estate developers and the government. Nothing is being considered but economic interests.”  They complained that the city lacked good channels for local scholars and preservationists to communicate with the government. The city is Harbin in the former Manchuria now part of China with a Russian heritage of both Russian Orthodox and Russian Jews (“A Chinese City with a Russian Past Struggles to Preserve Its Legacy,” NYT 6/5/17). 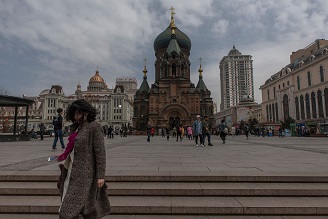 Today in New York and America, students can study the role of religion in the social fabric of every community but their own. Today adults travel the globe visiting the physical expressions of religion without knowing what it is in their own community. The pyramids may have lasted for millennia but they are dead structures of a dead society. But the questions people asked and wondered about have remained and our common to all cultures. Especially in New York, one doesn’t have to travel far for a close encounter of a different kind. The social fabric of a community is intangible but it can be glimpsed in the tangible expressions of it. When we only know our own kind and at this moment, the social fabric unravels. We always are part of something larger than ourselves whether we realize it or not. Understanding the social fabric of our home community begins a journey that helps us to understand the community of the starship earth.

Considering Harlem’s cultural heritage panel, experts will evaluate the cultural brand of Harlem, which has attracted global attention, and reflect on whether it now represents the community as a whole. On the topic of the built environment, panelists will discuss retaining identity and a sense of place, as defined by the physical environment, cultural legacy, and inhabitants, the effectiveness of working with landmarks designation, building community activism and forging private-public partnerships while also adapting to growth and development. And lastly for the community’s social fabric, using the church as a microcosm of a community in transition, leaders from Harlem’s churches will consider how contemporary needs and uses may revitalize and breathe new life into Harlem’s historic church buildings.

The Harlem Preservation Conference is a worthy undertaking. It should be replicated in communities which are not political entities in their own right and those that are. I do not know what the results were of the conference and what the next steps (if any) the participants have chosen to take. I do know a journey begins with a single step and community preservation conferences are an excellent first step to reknitting the social fabric at the local, state, and national level.

Dr. Peter Feinman is the founder and president of the Institute of History, Archaeology, and Education, a non-profit organization which provides enrichment programs for schools, professional development program for teachers, and public programs. He received his B.A. in history from the University of Pennsylvania, a M.Ed. from New York University, an MBA from New York University, and an Ed. D. from Columbia University. His interests cross disciplinary boundaries including American history, ancient civilizations, biblical history, and New York history., feinmanp@ihare.org