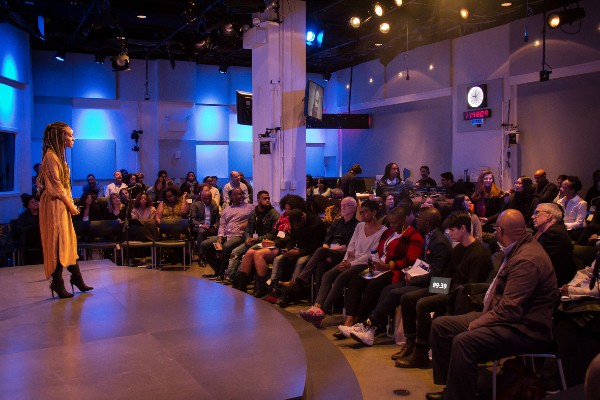 Ten producing teams will vie for up to $150,000 in project funding at the Black Public Media (BPM) PitchBLACK Forum, an interactive pitching competition to public television and commercial distributors and funders. The high-stakes event culminates the fourth edition of BPM’s intensive 360 Incubator+ fellowship, a holistic professional development program designed to identify and pipeline quality Black content.

The virtual PitchBLACK Forum will be held on Wednesday, April 7, and Thursday, April 8, 2021, and will be hosted by award-winning veteran producer Sandy Rattley, who serves as the creative consultant for the incubator.

Winners of the PitchBLACK Forum will be announced at the PitchBLACK Awards on Friday, April 9, at 7 p.m., a virtual ceremony where documentary filmmaker Marco Williams will receive the BPM Trailblazer Award.

Since January, the 360 Incubator+ fellows have benefited from an array of virtual workshops on pitching, grant writing, budgeting, licenses, distribution, and more.

Rattley helped the BPM team and each team’s mentors guide the fellows in the development of their project plan, sample reel and pitch.

“The strength of BPM’s 360 Incubator+ is the collaborative effort of our mentors and workshop leaders combined with the amazing talent of our fellows,” said BPM Director of Program Initiatives Denise Greene.

“Even in a virtual environment, there was a strong sense of community and a shared mission to elevate Black stories.”

The 10 projects competing for a license agreement for public media distribution and funding include Before We Wrap by Elizabeth Charles; Buffalo Soldiers: Fighting on Two Fronts by Dru Holley; Fighting for the Light by Yeleen Cohen and Ife Olujobi; Higher 15 by Ameha Molla and Rajal Pitroda; Inner Wound Real by Carrie Hawk and Chelsea Moore; Listen to Me by Stephanie Etienne and Kanika Harris; Storming Caesars Palace by Hazel Gurland-Pooler and Naz Habtezghi; Food Griot Chronicles (working title) by Tonya Hopkins and Laura Colleluori; The Ride by Allison Shillingford and J. Lathon; and What’s in a Name? by Malkia Lydia and Khalil Munir. Projects include broadcast programs and series as well as a digital series.

The BPM Trailblazer Award recognizes documentary filmmakers with more than two decades of experience working primarily in public media as a producer, director, writer or editor, who also have a strong track record of mentoring emerging media makers.

Williams, an acclaimed writer, producer, director and film educator, is an Emmy nominee and Peabody Award winner whose films have all been nationally broadcast on cable or public television.

Entertainment industry executives and funders wishing to attend the PitchBLACK Forum may request access at https://bit.ly/3uuK10l. Registration for the PitchBLACK Awards, which is free and open to the public, starts March 3 at www.blackpublicmedia.org.

Launched in 2014, 360 Incubator+ has helped advance the careers and projects of many dynamic Black storytellers. Past PitchBLACK winners include: POPS by Garland McLaurin, which premiered on ITVS’s Indie Lens Storycast on YouTube; My Africa Is by Nosarieme Garrick, which premiered on BPM’s signature public television series AfroPoP; So Young, So Pretty, So White by Chanelle Aponte Pearson and Commuted by Nailah Jefferson, which have received funding from ITVS; Read Awakening by Dominique Taylor, which premiered on PBS Digital Studio’s Facebook Watch digital miniseries; and The Hook by Shirlette Ammons which aired nationally on Create TV.

The 360 Incubator+ and PitchBLACK are funded by the Corporation for Public Broadcasting, Netflix, PBS, the MacArthur Foundation, Acton Family Giving, the New York State Council on the Arts, the New York City Department of Cultural Affairs and SHIFT.

Marco Williams is an award-winning director who has been creating films and telling impactful stories for a long time. He has been nominated three times for the Sundance Film Festival Grand Jury Prize: Documentary.

His credits include: Crafting an Echo, Tell Them We Are Rising: The Story of Historically Black Colleges and Universities, Lonnie Holley: The Truth of the Dirt, The Black Fives, The Undocumented, Inside the New Black Panthers; Banished; Freedom Summer; I Sit Where I Want: The Legacy of Brown v. Board of Education; MLK Boulevard: The Concrete Dream; Two Towns of Jasper; Making Peace: Rebuilding our Communities; Declarations: The Spiritual Deficit and The American Dream; Without a Pass; In Search of Our Fathers; and From Harlem to Harvard.

Black Public Media (BPM) is committed to enriching our democracy by educating, enlightening, empowering and engaging the American public about the Black experience.

Founded in 1979, the nonprofit pursues its mission by developing, producing, and distributing innovative Black media content through public media outlets and by investing in visionary Black content makers.