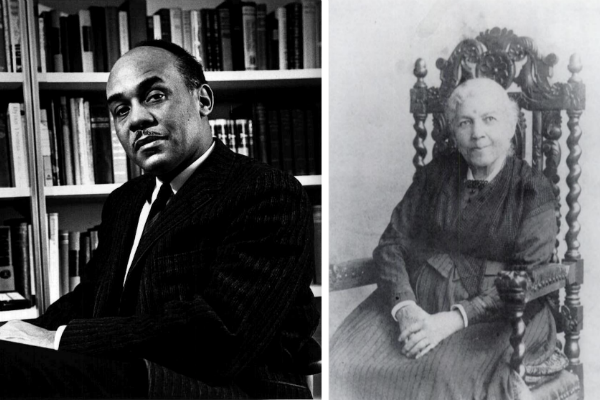 Their contributions to American literature and politics spanned almost two hundred years of African American life, with their joint induction into the American Poets Corner on Sunday, November 10, from 4:00 PM – 7:00 PM, at The Cathedral of St. John the Divine, located at 1047 Amsterdam Avenue (at 112th Street), In Harlem, NY.

Jacobs, born into slavery in North Carolina, is a heroine of the abolitionist movement. Her memoir, Incidents in the Life of a Slave Girl

, was published under a pseudonym in 1861 and detailed, in searing detail, the abhorrent violence of slavery, particularly as experienced by women and girls. Jacobs managed to escape to the North at the age of 29, and became part of the abolitionist community in New York, where she first began to compose her groundbreaking autobiography.

Born almost exactly one hundred years after Jacobs, Ralph Ellison grew up in Oklahoma City, part of the second generation of African Americans born after the end of slavery in the United States. Ellison’s literary talents became evident in his youth, and after a move to New York City, he became part of the burgeoning Harlem Renaissance, forging friendships with other pioneering authors and artists like Romare Bearden and Richard Wright. Invisible Man

, his best-known work, was composed during the mid-1940s and published in 1952. The novel is a visionary exploration of African American identity, influenced by contemporary themes of existentialism, socialism, and the alienating violence of racism. Invisible Man

won the National Book Award for Fiction in 1953.

The formal induction will take place during the traditional Evensong service sung by the Cathedral Choir and conducted by Director of Cathedral Music Kent Tritle. Following Evensong, the Cathedral will host a reading and celebration of Jacobs’ and Ellison’s work, including comments by Dr. Marilyn Nelson

, the Cathedral’s Poet in Residence.

, and last year’s honoree, Carl Sandburg. The American Poets Corner and Cathedral poetry events have become an integral part of the literary landscape of New York.

The Cathedral of St. John the Divine is the Cathedral of the Episcopal Diocese of New York. It is chartered as a house of prayer for all people and a unifying center of intellectual light and leadership. People from many faiths and communities worship together in services held more than 30 times a week; the soup kitchen serves roughly 25,000 meals annually; social service outreach has an increasingly varied roster of programs; the distinguished Cathedral School prepares young students to be future leaders; Advancing the Community of Tomorrow, the renowned preschool, afterschool and summer program, offers diverse educational and nurturing experiences; the outstanding Textile Conservation Lab preserves world treasures; concerts, exhibitions, performances and civic gatherings allow conversation, celebration, reflection and remembrance—such is the joyfully busy life of this beloved and venerated Cathedral.

Poets, fiction writers, essayists, and dramatists: the American Poets Corner memorializes the literature of our nation in all its surprise, wit and beauty. The Poets Corner, beloved by visitors, has earned respect for its choices of inductees, and for the high quality of its Electors and Poets in Residence, which include 17 U.S. Poets Laureate and winners of every literary prize an American writer can aspire to, including the Nobel. Every spring, the Poet in Residence invites each Elector to nominate a writer deceased for at least 25 years. Since 2000, one writer has been inducted each year.