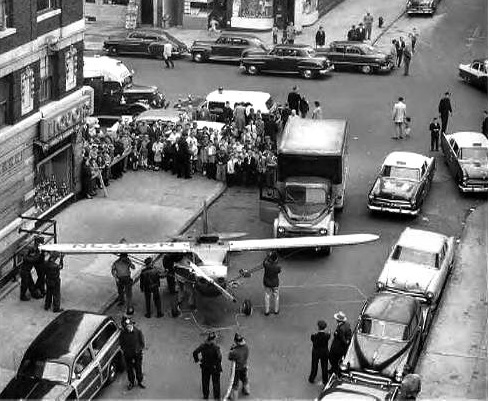 Surprise airplane landings always make headlines. Who will forget Capt. Chesley Sullenberger steering a US Airways jetliner onto the Hudson River in 2009?

Then there was a Long Island man who touched down on Rockaway Beach in 2011 and, more recently, a stunt pilot who coasted down safely onto a Suffolk County road.

But the remarkable drunken landings of Tommy Fitz have all but slipped into oblivion. The pilot, Thomas Fitzpatrick, turned a barroom bet into a feat of aeronautic wonder by stealing a plane from a New Jersey airport and landing it on St. Nicholas Avenue in northern Manhattan, in front of the bar where he had been drinking.

As if that were not stupefying enough, the man did nearly the exact same thing two years later. Both landings were pulled off in incredibly narrow landing areas, in the dark – and after a night of drinking in Washington Heights taverns and with a well-lubricated pilot at the controls. Both times ended with Mr. Fitzpatrick charged with wrongdoing.

The first of his flights was around 3 a.m. on Sept. 30, 1956, when Mr. Fitzpatrick, then 26, took a single-engine plane from the Teterboro School of Aeronautics in New Jersey and took off without lights or radio contact and landed on St. Nicholas Avenue near 191st Street.

The New York Times called it a “fine landing” and reported that it had been widely called “a feat of aeronautics.”

Again he took a plane from Teterboro and this time landed on Amsterdam and 187th Street in front of a Yeshiva University building after having “come down like a marauder from the skies,” in the words of Ruben Levy, the magistrate at Mr. Fitzpatrick’s ensuing arraignment. Newspapers reported that Mr. Fitzpatrick jumped out of the landed plane wearing a gray suit and fled, but later turned himself in.

Mr. Fitzpatrick told the police that he had pulled off the second flight after a bar patron refused to believe he had done the first one.

That first flight, Mr. Fitzpatrick admitted, was the result of a barroom bet, according to articles in The New York Times. (He died in 2009 at age 79.)

“The story goes, he had made a bet with someone in the bar that he could be back in the Heights from New Jersey in 15 minutes,” said Jim Clarke, 68, who had lived near the first landing spot and recalls seeing the plane in the street.

“Supposedly, he planned on landing on the field at George Washington High School but it wasn’t lit up at night, so he had to land on St. Nicholas instead,” said Mr. Clarke, who now lives in Chatham, N.J.

After the first flight, Mr. Fitzpatrick was arraigned on grand larceny charges, which were dropped after the plane’s owner declined to sign a complaint. He was also charged with violating the city’s administrative code, which prohibits landing a plane on the street. Mr. Fitzpatrick was only fined $100.

But after the second landing, a judge, John A. Mullen, sentenced him to six months in jail for bringing a stolen item into the city. The judge told him, “Had you been properly jolted then, it’s possible this would not have occurred a second time.”

Sam Garcia, 68, who as a child saw the plane resting on 191st Street, said, “If it happened today, they would call him a terrorist, and locked him up and thrown away the key.”

Mr. Garcia, who now lives in Puerto Rico, said, “I thought maybe they had trucked it in, as a practical joke, because there was no way a man had landed in that narrow street.”

After the second flight, Mr. Fitzpatrick told the police that he had held a pilot’s license but that it had been suspended after the first flight and he had never renewed it because “I did not want to fly again.”

A Washington Heights native, Mr. Fitzpatrick was living in New Jersey at the time of the flights, but still hung around with friends who were regulars in the bars, recalled Fred Hartling, 76, who remembered Mr. Fitzpatrick from the neighborhood.

Mr. Fitzpatrick was a charismatic, adventurous type who would “butter up my mother” to let him sleepover at the Hartlings’ apartment or convince her to let Pat go out to the bars, he said.

“Tommy had a crazy side,” he said. “The whole group of them, my brother’s friends, were a wild bunch.”

According to an obituary about Mr. Fitzpatrick published in a New Jersey newspaper, he was a Marine during the Korean War and received a Purple Heart. He worked as a steamfitter for 51 years, it said, had three sons and lived in Washington Township, N.J. He remained married for 51 years to his wife, Helen, who, when contacted recently, hung up on a reporter who asked about the flights.

It “landed on a street with lampposts and cars parked on both sides,” he said. “It was a wonder – you had to be a great flier to put that thing down so close to everything” (source).