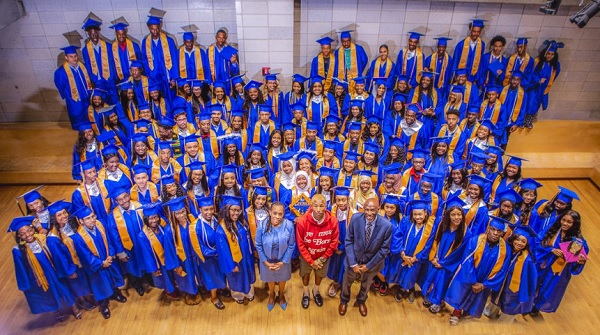 Singer and musician Pharrell Williams gave more than 100 Harlem high school students a surprise graduation gift, an opportunity to work with him.

Williams delivered the news to the 2019 graduating class at the Harlem Children’s Zone Promise Academy while giving the school’s commencement address, according to social media posts by both Williams and the school.

“Let me be clear. For every member of the 2019 graduating class is guaranteed an internship waiting for them — you — next summer,” Williams said to a raucous applause from the graduates and their families reports Patch.

The theme of William’s commencement speech focused on a “new Harlem Renaissance with education at its core.” This year is considered by many to be the 100th Anniversary of the original Harlem Renaissance, an artistic and intellectual movement led by black residents of Harlem that spanned the 1920s.

Every member of the Harlem Children’s Zone graduating class of 114 was accepted to college, according to the school. Promise Academy High School, a charter school, was created in 2008 and later expanded to a second building. The school network partners with the Harlem Children’s Zone to offer students access to the organization’s family, education and healthcare programs.

With this move, Williams is following in the footsteps of black billionaire Robert F. Smith, the investor who erased the college debt of Morehouse College’s class of 2019 earlier this year.