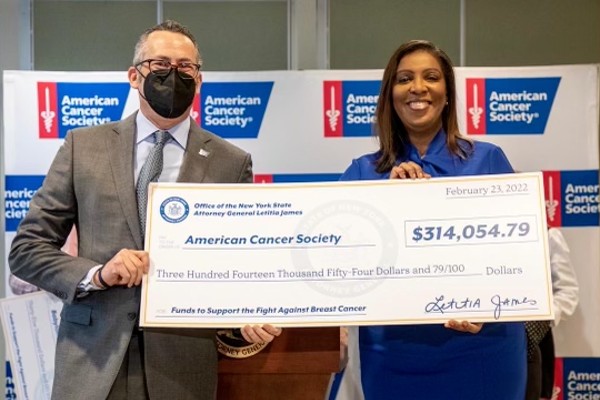 The funds were recovered by the Office of the Attorney General (OAG) from organizations and individuals who defrauded New Yorkers into making donations that went into the pockets of telemarketers.

The OAG recovered the funds from the Breast Cancer Survivors Foundation, Inc. (BCSF), a sham organization, and Garrett Morgan, a telemarketer who misled donors into contributing to a sham breast cancer organization on Long Island.

“It is unconscionable that organizations and telemarketers preyed on the public’s generosity and deprived breast cancer patients of vital support during a time of tremendous physical, mental, and emotional distress,” said Attorney General James. “Today, I am honored to return these funds to the people and organizations that need them most. My office is proud to be a partner to these five incredible organizations and help them in supporting breast cancer patients and survivors throughout their journey.”

In 2017, OAG announced an agreement with BCSF and its president and founder. The BCSF posed in phone and mail solicitations as a medical center for breast cancer patients, when in reality it was a shell organization funneling donations to an outside fundraiser, which pocketed 92 cents of every dollar donated to BCSF.

The OAG’s agreement required BCSF to shut down immediately and pay more than $300,000 in restitution, the last of which was received by OAG in 2021.

In 2013, OAG won a judgment against Garrett Morgan for fraud in raising funds for the Coalition Against Breast Cancer, a sham Long Island organization.

The organization raised millions of dollars with solicitations that claimed there was a “mammography fund,” when there was none, and that donations would provide free mammograms to uninsured women.

Morgan did not pay the judgment and, acting on a motion by OAG, the court-appointed a receiver to collect or sell Morgan’s property to satisfy the judgment. In 2021, the receiver delivered $303,747.86 to OAG.

“The American Cancer Society is committed to expanding access to care for all and removing barriers that prevent cancer patients from getting the care and treatment they need,” said Dr. Karen Knudsen, CEO, American Cancer Society. “The pandemic brought about dramatic declines in breast cancer screenings. We are grateful that funds from the New York Attorney General’s Office will expand our lifesaving initiative to increase cancer screening rates and ultimately save lives.” 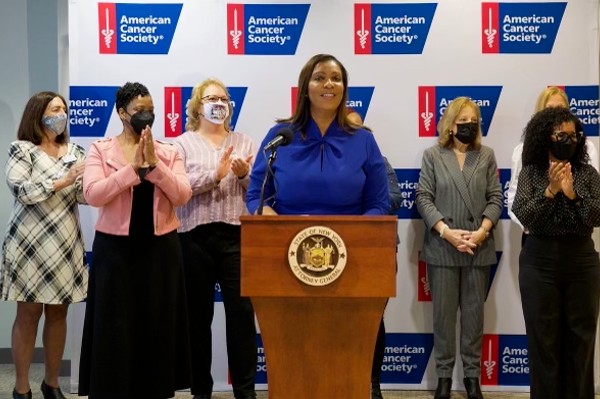 Grants range from $500 to $1,000 and are for living expenses. Grants are paid directly to vendors or billers.

Recipients of the one-time grants must be in active treatment for breast cancer or living with metastatic breast cancer, and have a household income under 400 percent of the U.S. federal poverty line.

“We are honored to have been selected by the New York Attorney General’s Office,” said Jean Sachs, CEO, Living Beyond Breast Cancer. “Living Beyond Breast Cancer was founded over 30 years ago to offer trusted information and a community of support for all people directly impacted by breast cancer. We annually serve over 600,000 people across the country. A critical program of ours is the Living Beyond Breast Cancer Fund, a financial assistance program that pays the bills for women in treatment for basic needs such as rent, utilities, and transportation. Since 2006, we have been able to disburse over 3,150 grants for an approximate total of $2,530,000 to women and their families. Since the pandemic began, we have doubled the number of grants available to give to recipients as a way to alleviate financial hardship faced by so many across the country. The funds provided by the New York Attorney General’s Office will allow us to continue this intensive support, and help women in treatment focus on their health and not on their bills.”

About 1 in 8 U.S. women (13 percent) will develop invasive breast cancer over the course of a lifetime and when that happens a woman’s life, and the lives of those who love her, are thrown into turmoil as she undergoes a horrific treatment ordeal…

“About 1 in 8 U.S. women (13 percent) will develop invasive breast cancer over the course of a lifetime and when that happens a woman’s life, and the lives of those who love her, are thrown into turmoil as she undergoes a horrific treatment ordeal,” said Nick Radesca, volunteer & vice president of finance, Babylon Breast Cancer Coalition. “Because most people’s lives have been impacted by this disease, many willingly donate to breast cancer charities. I want to thank the New York State Attorney General’s Office for bringing unscrupulous individuals to justice and redistributing defrauded donors’ funds to legitimate organizations. Babylon Breast Cancer Coalition, Inc. will use its share to provide free support services such as transportation to and from medical appointments, housecleaning, financial assistance, childcare, meal preparation, and other needed services.”

Manhasset Women’s Coalition Against Breast Cancer ($40,000): Manhasset Women’s Coalition Against Breast Cancer, Inc., will use the award to support its outreach program, which provides services to patients in the form of transportation, childcare, house cleaning, wigs, and non-financial support including advice and general emotional support of other former patients.

The recovered funds distributed today are part of OAG’s Operation Bottomfeeder, which is an initiative of the Charities Bureau to identify fraudulent charities and their fundraisers.

This is done through an analysis of annual financial reports, fundraising contracts, and other documents that nonprofit corporations file with the Charities Bureau, and has allowed OAG to take appropriate enforcement action against those engaging in fraud.

In 2020, as a part of Operation Bottomfeeder, Attorney General James announced a multi-agency agreement imposing a nationwide, permanent, ban on Outreach Calling, a for-profit fundraiser, from charitable fundraising.

To date, Operation Bottomfeeder has recovered approximately $1.7 million from sham charities and their fundraisers and has redistributed that money to legitimate charities.