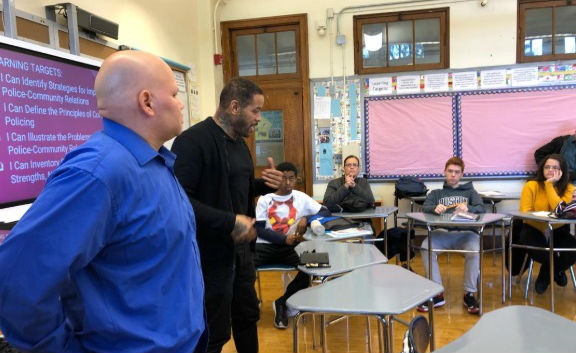 Police officers were friends when and where I grew up on Manhattan’s Upper West Side in the Sixties.

Gentrification did not yet carve the city into haves and have-nots, nor did “Stop and Frisk” treat youth of color as crime suspects without evidence of wrongdoing. We at the public Joan of Arc Junior High School were Irish-, Jewish-, an African-American, for the most part, got along, and often spent after school hours at the New York City Police Department’s 24th Precinct in Harlem to play ping-pong, shoot hoops, have homework help or chat about school or home life with beat cops we knew from the neighborhood.

Police Athletic League funds made that possible, a precinct wall banner declared. PAL now runs early childhood, science, and math education, along with summer recreation and job initiatives. It has transition supports for young people on probation or just freed from Rikers Island, all on a $25 million operating budget for 17 sites. Beyond PAL, police-community relations remains controversial amidst allegations of excessive force, racial profiling, and quotas. The advent of body cameras and “neighborhood policing” to promote transparency, accountability, and conciliation added more points to discuss from both sides: must officers always turn on their cameras? Is public release of film footage required? Has police training changed? How can trust grow? 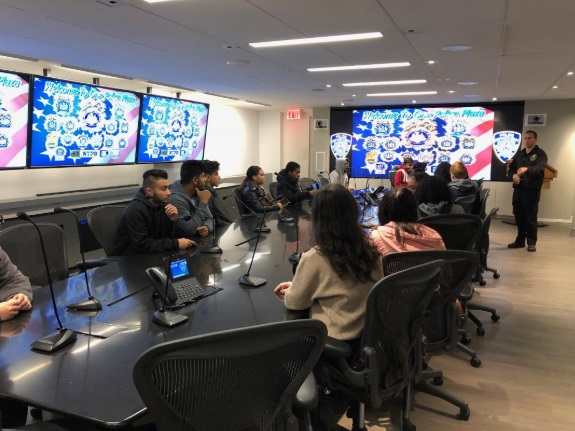 “One of the exciting things about history is being able to try to find the ‘truth’ by piecing together the stories of all the players,” my colleague Mike Kosciol explains. “Analysis and synthesis are two key components of our students’ historical work. We are constantly asking them to break down, or analyze, information from various sources and perspectives, and then synthesize that information to create their own idea or understanding of the issue. The outcome is work that is original, researched and personal.to the student.” Annotated briefing packets in hand, our group clambered downstairs through the rain to the train toward this project’s first destination.

”My main school was Julia Richman. I hung out, like others, selling drugs in the street,” David Grant told students. Grant, the Save Our Streets Program’s Community Engagement Liaison in Crown Heights, survived a perilous youth that put him in and out of prison. Having learned from the experience as he matured, Grant now leads anti-gun marches and rallies, street mediations and youth forums. “I’m older than you think I am, I was born in ‘71,” he continued. 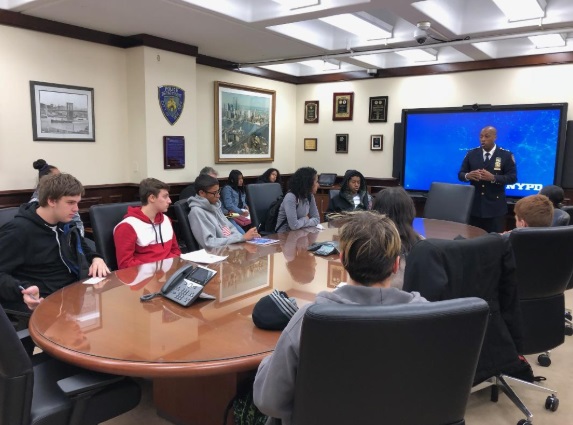 “Streets are now cleaned up but it was different than with crack vials in the street. Crack is a powerful drug that makes you want to do nothing except getting high. Hollywood actors and celebrities used what’s called ‘base,’ it smooths out the high but other chemicals were put in to make it intense. A lot of my friends are not here. I’m hurting because some were killed by violence, others did the violence, so they’re locked up. I’m just going on the basis of why it was so violent — people getting shot and stabbed because crack takes over your body. I had to watch out for the police, the stick-up man and the snitch.”

Grant, acting out the rough language and spread-eagle stance of “Stop and Frisk” policing, described how the 1988 murder of Police Officer Edward Byrne in Jamaica, Queens prompted NYPD Commissioner Ben Ward to build the Tactical Narcotics Team, (TNT) flooding undercover narcotics officers and investigators into that section, East Harlem and elsewhere for buy-and-bust operations producing mass arrests of low-level drug dealers and others swept up in the mayhem — an effort “the police call a success,” a 1988 New York Times piece reports, but mistrust remained.

“Police relations here (Crown Heights) and now are still not the best but I have to admit things have changed,” Grant conceded. “I go to the 79th Precinct Community Council meetings, sit with the Neighborhood Coordinating Officers and the Commanding Officer and have a conversation with them for my work as the Community Engagement Liaison. I no longer feel pressure going into the Precinct because I know I’ll be going back out.” Grant keeps private what he hears at his meetings or street mediations: “I have to be able to talk to you with mutual trust if I’m trying to change your mindset about whether to use a weapon or words to solve conflicts. It’s not the courage to speak but having facts and a context behind what you say; will your speech heal or divide us,” Grant advised students in closing. 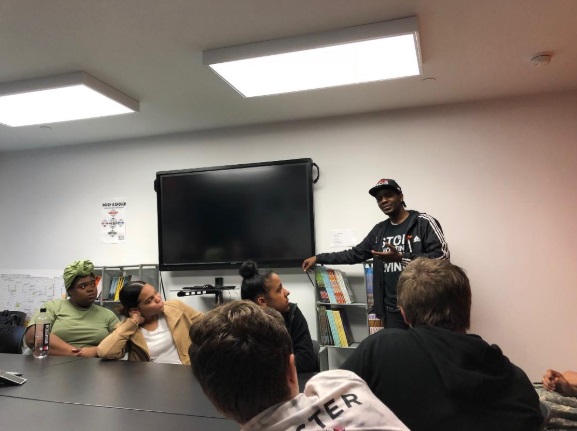 Students then left his cramped though cordial Crown Heights storefront for the First Deputy Commissioner’s ornate conference room at One Police Plaza, headquarters of the 36,000-member NYPD, the world’s largest urban police force. “This organization has made leaps and bounds in changing relations, “ Chief of Patrol Rodney Harrison proclaimed. Harrison, asserting he was harassed by cops as a youth, explained he “joined the force to change it and began as a School Safety Officer like men and women you see helping Leaders.” Harrison quickly rose through the ranks as a patrol officer, undercover narcotics detective, precinct then borough commander, to serve now as the Department’s third-ranking official. He supervises operations in all 77 precincts citywide.

“Just knowing to have the peace of mind of knowing you’re safe is the most important thing. We’re really good at that. Other cities, Milwaukee, St. Louis, for example, are on fire with crime. Now Neighborhood Policing is making sure that your local cops know who you are. You can call with a concern, that people are smoking marijuana or blasting music in front of your home, for example. The Police Commissioner uses a phrase: shared responsibility. We have to make sure there are relationships, a big step forward in contrast to the 90s, when I’d (confined to car patrol) have no idea who the person is walking down the street,” the Chief went on. “Now that I’m at the same post every day we have a relationship,” he claimed. To his credit, he invited students’ response.

“Relations with the police are half and half depending on where you live,” 10th grade, Justin said. Nate, a classmate told of tensions between a friend and police officers who stole his necklace, then laughed that they’d sell it, split the money between them, then arrest him for selling drugs even though he wasn’t doing that. Harrison to such tales told students “I appreciate that everyone’s being very honest with me. If anyone sits here and says every cop is doing everything they’re supposed to be doing to treat everyone with respect in every community then I just tune them out because that’s just not true.”

Yet the chance to cite training, mentoring or disciplinary measures to improve NYPD performance was forfeit as Chief Harrison lapsed into rhetoric: “That small percentage of cops who are not good — do me a favor and don’t use that 1% who are on social media to say all cops are bad. That’s the flavor — the spaghetti that sticks against the wall — the thing that sticks to you. When we get guns off the street, bring down a reign of gang members, or save people’s lives, nobody cares because that’s the job, what we’re supposed to do. Don’t paint a broad brush — just as it’s wrong if your school has a bully to say that the whole school is bad. Keep that in mind.” 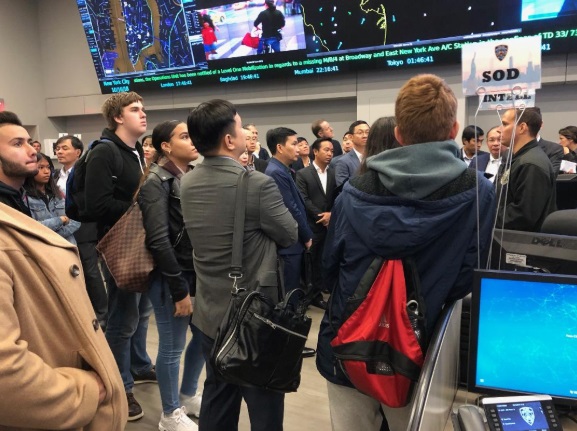 With that, he left us, because a senior police official’s schedule fills with meetings, speeches, press conferences, precinct visits, and the Compstat sessions where leaders grill precinct commanders on local crime trends, tactics, deployments. We were not surprised by our time termed a mere “meet and greet” but It left loose ends.

Also, a guided tour awaited, of the 24-hour Joint Operations Center that fields and routes 911 and 311 calls, monitors surveillance video of Times Square, Penn Station, Port Authority, highways, tunnels, electrical grids and other critical locations including patrol car deployments on enormous screens along a huge room’s perimeter as staff forwards “need to know” updates to the Police Commissioner and other executives. “They don’t want to hear about it on radio or television, they want to hear it from us,” a detective explained, “so they can rearrange personnel around the city to restore power generators, the subway system, cover unplanned demonstrations or provide Presidential and UN security. We open this room for federal, state and city interagency cooperation.”

The NYPD, under federal oversight from a 2013 court finding that widespread “Stop and Frisk” practices violated the U.S. Constitution’s Fourth Amendment, was litigating a dissident police officers’ lawsuit against the illegal but alleged use of quotas, the Daily News reported early this year. Commissioner O’Neill had already ordered mandatory training for uniformed officers and threatened disciplinary action against supervisors to uphold the Department’s “no quota” policy in partial settlement of a $75 million class action proceeding on the same issue, the story revealed.

Leaders teens interviewed two of the dissenters, Detective Derrick Waller and Police Officer Pedro Serrano, after viewing Brooklyn filmmaker Steven Maing’s award-winning Crime and Punishment documentary (in which they appear) about the NYPD 12 and how they’ve withstood departmental retaliation to press their legal case.

“The Supervisors are pressured to pressure us,” Sergeant Edwin Raymond asserts in the film. “It starts all the way at the top with the Commissioner and Deputy Commissioner.” Though NYPD spokespersons deny this, 89% of respondents to a police union survey agreed that quotas exist.

“My boss said I need to target Blacks between 14 and 24 years old, but if you have a hint of color you’re automatically Black or Latino,” Officer Serrano said in our classroom. “We’re not here representing the PD. I’m trying to represent the people who are concerned and to teach you how to behave when you’re around the police or when you get stopped. Chief Harrison will tell you how it’s supposed to be but I’ve worked 14 years on the street.”

“Cops get 5 hours of overtime per body they arrest. The city gets court fees. It’s all about money. Captains hear ‘you’re not getting that promotion till your numbers start going up. You had 36 parking tickets last month, 16 this one. What happened?”

“I’m retired so I can tell you the truth,” Detective Waller declared. “Cops get 5 hours of overtime per body they arrest. The city gets court fees. It’s all about money. Captains hear ‘you’re not getting that promotion till your numbers start going up. You had 36 parking tickets last month, 16 this one. What happened?” 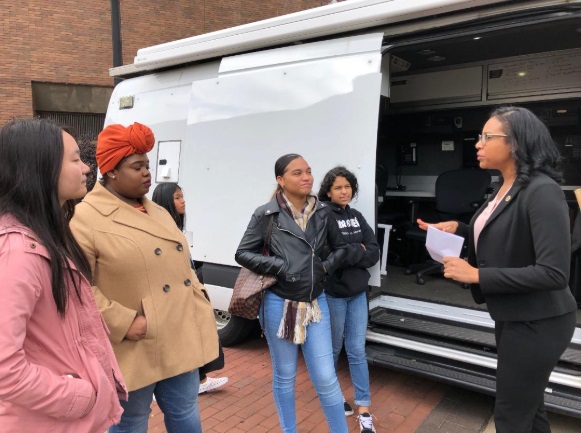 12th-grade Rohil shared having received more than one subway summons despite his valid Metrocards, to which Serrano replied, “16 years old is the age at which you can get a summons. I would check your school ID, your name, let you go and do what you have to do. That’s what we call discretion. It’s common sense. But I’ll get punished.”

Maing’s covert filming in Crime and Punishment captures supervisors’ quota demands and retaliation against each of the 12: a single mother’s midnight shifts, one man’s daylong foot post in freezing weather on a vacant Bronx corner, earned promotions denied with poor performance reviews issued instead. Serrano and Waller closed with role-playing of a mock traffic stop to show students how police are trained to approach and perform, pointing out what civilians should and shouldn’t do at such times since, they said, safety was their priority.

At week’s end, their Intensive course done, Leaders students had more questions than answers. “Police behavior in minority communities is the nation’s main racial problem,” Dr. Martin Luther King Jr. said in 1966 in Detroit. Was he right at that time? Is he still? What can be done? 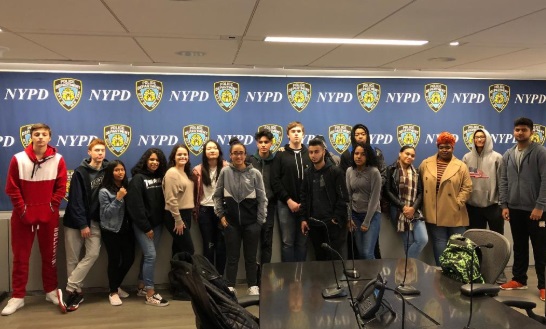 “We don’t usually learn this in school,” Rohil concludes. “It’s not something from the 1800s. This is like current events. That’s why it’s important and why I took this Intensive.”