When Rabbi Mordecai Herman would visit the Lower East Side of the 1920s, then teeming with Jewish immigrants from Europe, he cut an intriguing figure.

He was a wizened black rabbi and former sailor from Harlem who spoke Hebrew, some Yiddish, and was a pioneering spiritual leader of the early black Hebrew Israelite movement.

Now, nearly a century after his life’s work, Herman has been memorialized on the streets of Jerusalem — a Jewish homecoming for a forgotten religious figure.

This is thanks to Solomon Souza, an Israeli artist who has transformed Jerusalem’s central Mehane Yehudah market into a pop-up art gallery, emblazoning the enclosed market’s shuttered metal doors with over 150 graffiti portraits of iconic figures like Albert Einstein, Golda Meir, Rabbi Ovadia Yosef and the biblical prophet Moses.

Herman may seem like an odd choice alongside such well known figures. But Souza studied the Hebrew Israelite’s history on a friend’s recommendation and was moved.

“The Israelites connected to something and held on to it,” said Souza. “That community, it ignited something. I felt like I had to portray them in some way.”

Herman was part of a generation of influential African American spiritual leaders of the 1920s and 1930s, a time when New York City’s black population was swelling during their exodus from the south known as the Great Migration.

It was during these years that the black Hebrew Israelite movement took shape. Herman, like his peers, preached that black Americans had ancient ties to the biblical Israelites — and that they should return to this Hebraic way of life.

Congregations popped up, with names like the Commandment Keepers Ethiopian Hebrew Congregation and Beth B’nai Abraham. Congregants studied Torah, kept kosher and observed the Sabbath. Herman formed his Harlem congregation, called the Moorish Zionist Temple, around 1920. He drew inspiration from the pre-state Zionist movement and saw his fate as intertwined with other Jews. 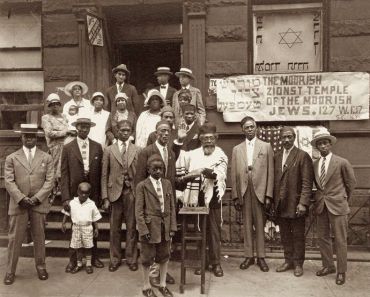 He urged his black congregants to stand in solidarity with pre-state Zionists.“Listen brother, it is my present belief that Palestine will be free,” he wrote at the time, in a Hebrew language flyer. “It is a fact that our Jewish brothers in Europe and America can not hold and defend Palestine; but our black Jewish brothers in India, China and Abyssinia have a little more skill in warcraft than the normal and heroic Jew.”

The movement he helped shape would develop many distinct streams over the next decades, from New York’s influential Commandment Keepers community, to Dimona’s Black Hebrews. Some groups championed a more separatist black independence; others reached out to the white Jewish communities in America. Some developed an Afrocentric practice; others incorporated Ashkenazi and Sephardic traditions.

Though Herman never set foot in the State of Israel, his face now adorns the walls of Jerusalem, alongside a collection of other, better-known Jewish icons. The pop-up art gallery is still growing.

“We look for people,” said Souza, “who influenced the Jewish people.”