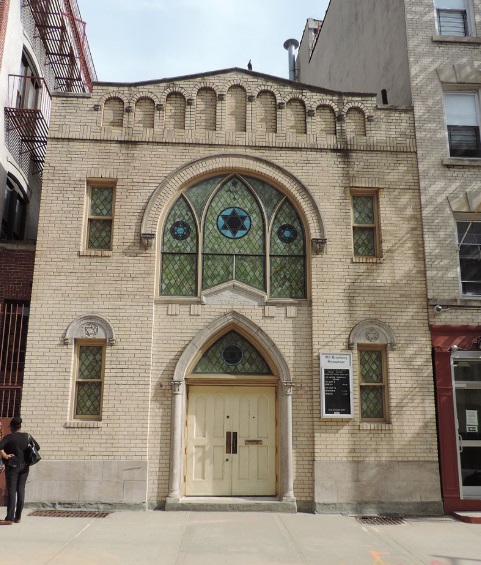 The New York Landmarks Conservancy has announced a $5,000 grant to Old Broadway Synagogue in Harlem to help fund structural repairs to reinforce floor joists and beams.

Included in this grant is 23 other Sacred Sites Grants totaling $256,000 awarded to historic religious properties throughout New York State,

The Old Broadway Synagogue was built in 1923 by the Chevra Talmud Torah Anshei Marovi, an Eastern European orthodox congregation established in West Harlem in 1911. The Synagogue was designed by the architectural firm of Meisner and Uffner and is an excellent example of a “vernacular” or “tenement” style synagogue. It is the only purpose-built, active synagogue in the Morningside Heights/Manhattanville/Harlem sections of Upper Manhattan. Old Broadway Synagogue has cultivated ties to the nearby Jewish Theological Seminary and Columbia University. It sponsors twice-weekly classes and lectures, interfaith events and a weekly luncheon. These non-worship activities bring about 1,000 people to the building.

“We feel it is very important to help maintain religious structures that provide a sense of history and place to communities,” said Peg Breen, President, The New York Landmarks Conservancy. “Many also provide social service and cultural programs that benefit people beyond their congregations. “

The Sacred Sites Program provides congregations with matching grants for planning and implementing exterior restoration projects, technical assistance, and workshops. Since 1986, the program has pledged over 1,493 grants totaling more than $11.1 million to almost 805 religious institutions statewide.

The New York Landmarks Conservancy has led the effort to preserve and protect New York City’s architectural legacy for more than 45 years. Since its founding, the Conservancy has loaned and granted more than $52 million, which has leveraged more than $1 billion in 1,550 restoration projects throughout New York, revitalizing communities, providing economic stimulus and supporting local jobs. The Conservancy has also offered countless hours of pro bono technical advice to building owners, both nonprofit organizations and individuals. The Conservancy’s work has saved more than a thousand buildings across the City and State, protecting New York’s distinctive architectural heritage for residents and visitors alike today, and for future generations. For more information, please visit www.nylandmarks.org.