The death of a pioneering judge found in the Hudson River is being treated as “suspicious” by the NYPD — which has a special contingent of cops investigating how she wound up in the water, The Post has learned.

“We’re looking at it as a suspicious death at this point,” NYPD spokesman Stephen Davis said.

“We haven’t found any clear indications of criminality, but at this point we can’t say for sure. We’re hoping if anyone could shed any light into the hours before her disappearance, it would help us establish what happened.”

Extra cops have been assigned to find and review additional video from stores, residential buildings and mass transit, sources said.

“The problem is that where she lives, there’s a dozen ways of going anywhere,” one source said.

“No video shows how she got anywhere that day.”

Cops also issued a public appeal for assistance Tuesday, with the 26th Precinct in Harlem tweeting an “Information Needed” notice including her photo and a description of the clothing she was wearing before she disappeared. 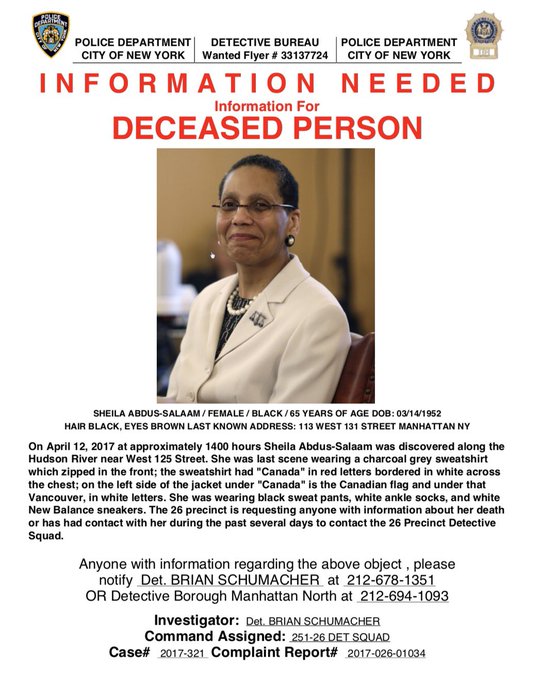 Abdus-Salaam, 65, was the first African-American female to serve on the state’s highest court.

She was last seen alive by a deliveryman who handed her a package at her apartment the morning of April 12, sources said, and she was reported missing by her husband after he got a call around noon saying she hadn’t shown up at work.

Her body was found floating in about three feet of water near 132nd Street around 1:45 p.m., sources have said.

The Medical Examiner’s Office hasn’t determined the cause and manner of her death, but sources said an autopsy found water in her lungs, suggesting she was alive when she went into the river.

Some slight bruising was found on her neck, but her eyes didn’t show the type of bleeding consistent with strangulation, sources said.

Cops initially described Abdus-Salaam’s death as a suspected suicide, in part because she had struggled with depression and both her mother and brother died earlier around Easter, sources said.

There were no signs of forced entry or a struggle in her apartment at 113 W. 131st St., and she left behind her car, pocketbook, cash, MetroCard and cellphone, which are possible signs of suicidal intent, source said.

Without any evidence that Abdus-Salaam voluntarily jumped into the water, NYPD brass are “worried a video could pop up where a guy has her in headlock, or is dragging her, and it’s not a suicide,” a source said.

“God forbid someone a year from now says, ‘I killed the judge and this is how I did it,’” and police don’t have the evidence to support or refute that claim, the source added,

“That’s why they’re sending out these notices. It’s to cover their bases.”