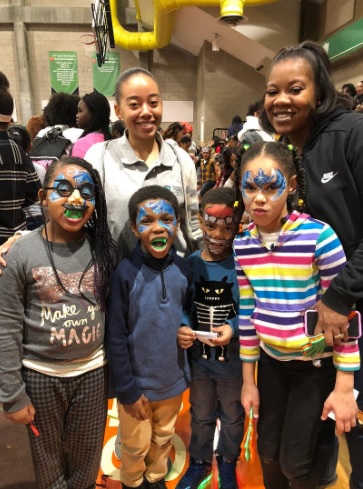 On Saturday, December 8th, 2018, over 400 boys and girls, ages five to 12, from PAL (Police Athletic League) After School programs in all five boroughs, enjoyed a festive holiday party at PAL’s Harlem Center. PAL’s Holiday Party was filled with entertainment, arts, and crafts, carnival games, music, dancing, gifts, face-painting, a DJ dance party, participation by NYPD Officers and a visit from Santa Claus. The young people were also treated to a special performance by the PAL Cops & Kids Chorus.

“I am having so much fun today playing all of my favorite games!” said Ma’liga, 5, from the Harlem Center in Manhattan.

After a recent performance at the Tree Lighting Ceremony for Christmas in Rockefeller Center, the PAL Cops & Kids Chorus added to the joy of the season by performing at the holiday party. The PAL Cops & Kids Chorus provides an opportunity for New York City youth to form genuine relationships with NYPD officers, build self-esteem and perform in a variety of exciting venues. The Chorus is an initiative within the PAL Acting Program, under the leadership of PAL Board member Tony Danza. 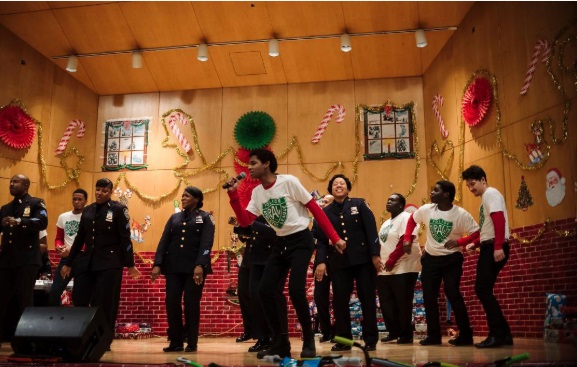 The PAL Annual Holiday Party in Harlem is one of many PAL holiday celebrations throughout the city bringing happiness and toys to thousands of youngsters at PAL centers and police precincts in their own communities. PAL celebrations are made possible by the generosity and holiday spirit of hundreds of caring New Yorkers including Margo and Harlemite John Catsimatidis.

New York City’s Police Athletic League is the first and finest civilian-run PAL in the country. Founded in 1914, PAL has served the city’s young people for over 100 years. PAL provides recreational, educational, cultural and social activities to 30,000 boys and girls annually. It is also the city’s largest, independent, a nonprofit youth organization. For more information, please visit www.palnyc.org.