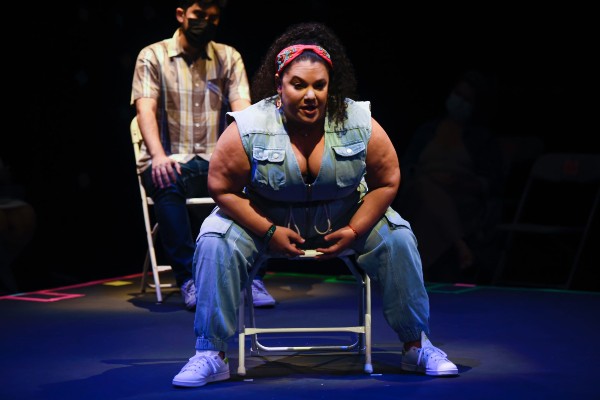 At a moment when the Latino community in New York City and across the United States begins to find its way out of the struggles.

The struggles of the past few years comes to a theater piece meant to shine a light on the beauty that is life.

When it opens on December 8th at the Julia de Burgos Performance and Arts Center in El Barrio (aka East Harlem), NYC, Boundless Theatre’s new production will confront the difficult topic of suicide with an eye to raise awareness about the subject while also using it to explore the many aspects that make life worth living.

“Las Cosas Extraordinarias”, which runs until December 12th, 2021, and will be presented in Spanish with no English supertitles, deals with the subject of suicide with great empathy, compassion and even light humor, humanizing the characters and describing the many facets of the disease.

At the core, “Las Cosas Extraordinarias”, a Duncan Macmillan’s play with Jonny Donahoe, is about how the despair that a young woman feels since childhood at the idea of losing her mother, leads her to design a list of extraordinary things, reasons for which life is worth living for.

The work intentionally smashes the fourth wall, making the audience an active part of the play as they get to interact with the main character, portrayed by Norwill Fragoso. Similarly, the show fosters intimacy and encourages audiences to reflect on the fullness of life and its meaning.

After two successful seasons in Puerto Rico, the presentation of this piece to a New York City neighborhood aims to impact, educate and spark a broad conversation about suicide prevention and how to collectively fight our communities’ mental issues locally and nationally.

“Creating this character has been an acting challenge that has also been rewarding. The piece deals with a subject that affects us all so deeply and remains so taboo, especially within the Hispanic community. Both in Puerto Rico, where the piece was first presented, the United States and the rest of the world we are seeing around us the toll that mental health struggles take not only of those who unfortunately suffer from it but also their loved ones and those around them. It’s an issue that we need to address as a collective and art, this fictional piece, gives us a space to do that perhaps in ways that other spaces may not allow. To be part of that is quite powerful,” shared lead actress Norwill Fragoso.

Boundless Theatre is no stranger to using its platform as a space to work out powerful conversations and foster actions that positively transform the world.

The project is quite timely as the suicide rates amongst some communities of color, including Black and Hispanic Americans, has been increasing, acording to the latest preliminary study published by the CDC, early this month.

Led by designers, an uncommon practice in an industry where companies are mainly led by actors, the company runs several programs that support diversifying the theater industry.

These include Boundless Exposed, a mentoring program for young designers of color, and Boundless de Oro, a free theater program for NYC seniors, among others. With “Las Cosas Extraordinarias”, Boundless Theatre kicks off an artist residency at the Julia de Burgos Performance and Arts Center, sponsored by the center and the Hispanic Federation, that will allow them to further spread these programs across the city.

“With everything we are living, it is very easy, and perhaps necessary, to get lost in the list of obstacles and impediments to life and theater we all experience, whether you live in Puerto Rico, New York, or anywhere else in the world. Texts like Duncan Macmillan’s remind us that there are other lists that we ignore, full of things that we take for granted and do not value. They are lists of details that become the lifeline for the moments we live in. I’m eager that this show invites the spectator to make their own list. With my direction, I want to bring hope and a space for remembering the thousands of extraordinary things for which we deserve to stand up for life. Keep doing and coming to the theater despite the non-truce,” added director Ismanuel Rodríguez.

The performances will take place on December 8th to 11th, 2021, at 8 pm and 12 at 4 pm at the Julia de Burgos Performance and Arts Center, Lexington Ave. and 106th Street, East Harlem, NY.

All NYC and CDC safety protocols will be followed. Proof of the Covid-19 vaccine is required.

The use of a mask is mandatory.