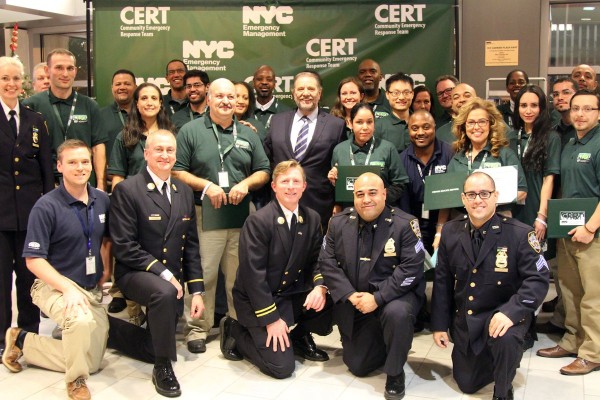 The program will kick in during a virtual graduation ceremony on Tuesday, January 11, 2022. The NYC CERT basic training cycle includes 10 sessions that focus on disaster preparedness and emergency response, equipping volunteers with skills in basic fire safety, search and rescue, traffic management, and first aid and triage.

“Community Emergency Response Teams are an integral part of the City’s emergency planning. Whether it’s supporting during the pandemic or hosting presentations to prepare their fellow New Yorkers for emergencies, our CERT members are always there to answer the call,” said New York City Emergency Management Acting Commissioner Christina Farrell. “On behalf of NYC Emergency Management, I congratulate the 33 graduates and look forward to the great work they will do in their communities.”

During the ceremony, the John D. Solomon Award for Exemplary Service in Emergency Preparedness Education was presented to Geneva Wilson of Bronx 2 CERT.

Throughout the year, Wilson demonstrated a strong dedication to NYC CERT, volunteering with the Ready New York program to educate her community about emergency preparedness while also maintaining her role as a recruiter for the CERT program. Wilson was recognized for her extensive efforts to prepare the communities in the Bronx for emergencies.

“NYC Emergency Management’s Community Emergency Response Teams is an integral part of the city’s response to major emergencies and the FDNY is proud to be part of it. The impact of these volunteers cannot be overstated: this training means our communities are stronger and more prepared for whatever comes our way. We join NYC Emergency Management and the other agencies in congratulating the graduates and look forward to their tremendous work,” said Fire Commissioner Daniel A. Nigro.

Two of the volunteer program teams were also honored for going above and beyond the call of duty to support their communities.

Queens 2 CERT was presented with the Carlos Nieves New York City CERT Award for Excellence in Deployment and Emergency Response.

The award recognizes a community emergency response team that has exhibited exceptional dedication to assisting their fellow New Yorkers during emergencies.

The Joanne Webb Dixon New York City Ambassador Award was also presented to a local Queens’ team. The award recognizes the team’s generous commitment of time, support, and inspiration to its community, along with an exceptional focus on expanding partnerships.

“The NYPD and the NYPD’s Auxiliary Police Section are proud to partner with the NYC CERT program. The NYPD’s Auxiliary police section demonstrates the vital role that well-trained, prepared and dedicated civilian volunteers can play in assisting first responders during critical incidents,” said Police Department Commissioner Keechant L. Sewell. “The NYC CERT program continues to be an effective way for dedicated volunteers to assist first responders and their communities in the event of a disaster.”

During the event, a participant was seen face down in the water and in need of aid. The CERT members there quickly jumped in to assist, with Brooklyn 6 CERT member Britta Husack providing lifesaving CPR.

Since its launch, NYC CERT has responded to a host of emergencies, and local teams quickly adapt to the City’s specific emergency needs.

CERT members also work year-round to ensure their communities are prepared for emergencies, providing information and resources to assist residents with creating an emergency plan for their friends and family.

NYC Emergency Management hosts Community Emergency Response Team training cycles three times a year. The next training cycle will also be a hybrid model and is scheduled to begin in spring 2022.

For more information about the CERT program, or if you are interested in becoming a CERT volunteer, call 311 or visit NYC.gov/cert.

The New York City CERT program started in 2003 with 106 volunteers. Today, there are more than 1,200 credentialed CERT volunteers throughout the five boroughs.

NYC CERT volunteers participate in a 10-session basic training program where they receive instruction from active members of the FDNY, NYPD, and NYC Emergency Management.