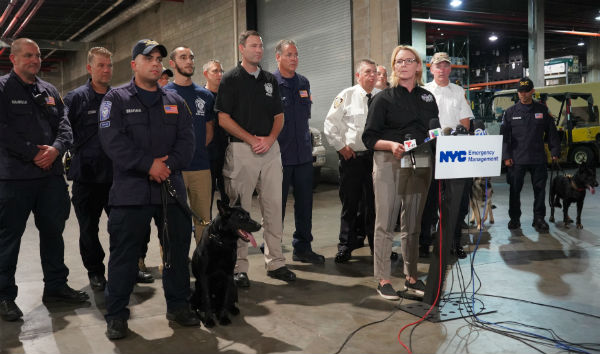 The Federal Emergency Management Agency (FEMA) has activated the Urban Search and Rescue (US&R) New York Task Force 1 (NY TF-1) team to deploy to Florida in support of Deplos To. The US&R NY TF-1 team is sponsored by the New York City Emergency Management Department and is made up of specially trained personnel from the FDNY and NYPD.

“New York City stands with our fellow Americans facing down Hurricane Dorian” said Mayor de Blasio. “Our brave first responders have been deployed to aid in search and rescue, recovery, and disaster operations. We are continuing to monitor the situation and are prepared to send more help as needed.”

“As they have for previous hurricanes across the country, the elite FDNY and NYPD members of New York Task Force 1 will answer the call for help far beyond the borders of the five boroughs,” said Fire Commissioner Daniel A. Nigro. “I am proud of their dedication and commitment to rescuing and protecting those who are in the path of this dangerous storm.”

“Today, NYPD members join with fellow skilled and experienced first responders to help those facing a serious hurricane in Florida,” said NYPD Commissioner James O’Neill. “Urban Search and Rescue New York Task Force 1 is comprised of well-trained emergency professionals who are ready to respond at a moment’s notice, wherever they are needed, and provide their assistance – even in conditions that could pose great risks to themselves.”

“New York Task Force 1 is always ready, willing and able to help wherever and whenever needed,” said NYC Emergency Management Commissioner Deanne Criswell. “This team has faced hurricanes, earthquakes, and terror attacks, and is now prepared to help people who are threatened by Hurricane Dorian.”

New York Task Force 1 specializes in urban search and rescue, disaster recovery, and emergency triage and medicine. The 47-member team, along with three canines, departed from New York City Emergency Management’s Brooklyn facility to Jacksonville, Florida, where they will pre-stage ahead of potential assignments. The team is deploying with various equipment and tools to support its operations, including swift water rescue boats, items to support rescues from collapsed structures and confined spaces, as well as a compilation of hazardous materials response equipment. The team is expected to arrive in Jacksonville on Saturday night.

There are 28 FEMA US&R teams strategically located throughout the United States that can be deployed within six hours of activation. FEMA has activated 16 US&R teams in response to Hurricane Dorian’s expected impact on Florida and the surrounding areas.

The FDNY’s Incident Management Team (IMT) has also been activated and 25 members of that team are headed to Florida. Incident Management Teams are federally trained teams of first responders who are deployed to assist local municipalities in managing large-scale long-duration incidents and emergencies. The FDNY IMT will report to the Florida State emergency operations center on Sunday.

The FEMA US&R program originated as a response system for natural disasters. Since the program’s inception, the task forces have broadened the scope of US&R’s work. Two early activations of the US&R system occurred in response to Hurricane Andrew in 1992 and the 1994 Northridge Earthquake in California. FEMA US&R teams also activated in response to the 1995 Oklahoma City bombing, the 2001 attacks on the World Trade Center and the Pentagon, and Hurricanes Katrina and Rita in 2005. NY TF-1 deployments include Hurricanes Ike and Gustav in 2008, the Haiti Earthquake and Hurricane Earl in 2010, Hurricane Matthew in 2016, Hurricanes Harvey, Irma, and Maria in 2017, and Hurricane Florence in 2018.