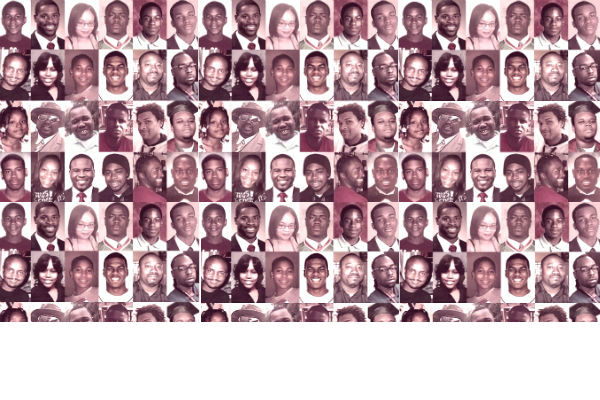 raise our voices in support of those throughout the country who are peacefully protesting the death of George Floyd in Minneapolis at the hands of police officers.This recent tragedy has again revealed the harsh reality of actions often delivered by law enforcement personnel to unarmed people of color throughout the United States. However, as enraging as George Floyd’s death is, such action at the hands of those mandated to “Protect and Serve” are not new. We recall the deaths of Armaud Arbery, Breonna Taylor, Freddie Gray, Sam Dubose, Philando Castile, Terence Crutcher, Korryn Gaines, Alton Sterling, Walter Scott, Tamir Rice, Sandra Bland, Michael Brown, Eric Garner, Atatiana Jefferson, Eleanor Bumpers, Amadou Diallo and many more, named and unnamed, and we demand change.

Their deaths are symptomatic of the institutionalized racism that exists throughout society and must be addressed if we are to prevent the repetition of such atrocities. The New York Coalition of One Hundred Black Women, Inc. invites like-minded organizations and community partners to work collaboratively to obtain policy changes that will lead to positive results. The time is now to begin discussions to address issues such as:

Enhanced police officer training to include but not be limited to 1) non-lethal de-escalation training, 2) creation of unconscious-bias training, 3) psychological evaluation of law enforcement officers before hiring.

Action steps such as:

There are also numerous healthcare and education disparities that have been revealed during the Coronavirus pandemic that also demand our attention and action as we move forward into a new “normal.”

Related:  Harlem Rep. Espaillat Calls For Reauthorization Of The Violence Against Women Act

Dr. Kairson brings more than 30 years of progressive experience in the public and private sectors developing and administering adult education and vocational training programs. Her interests include the mentoring of girls and women in the pursuit of their personal, academic and professional goals.

She has been a member of the Coalition for more than 20 years.

Dr. Kairson currently serves on the Board or as a member of several community organizations. She is also a proud member of Delta Sigma Theta Sorority, Inc. She is a native New Yorker who resides in the Village of Harlem with her husband, LTC (Ret) Francis Kairson, Jr. Dr. Kairson is not one to rest on her past accomplishments and truly believes that, “Service is the rent we pay for the privilege of living on this earth.”

The New York Coalition of One Hundred Black Women is a non-profit organization addressing social, economic, political, cultural and other issues of concern to Black women in the five boroughs of New York City and beyond. The organization is dedicated to improving the quality of life for its members, as well as women and families in the local communities and the larger city, state and nation. For more information about the organization contact the NYCOBW Executive Offices at 208 East 79th Street, 2nd floor, New York, NY 10075-1202, 212-517-5700 or Email: nycobwcoalition@gmail.com. Follow the Website here. Follow on Facebook here