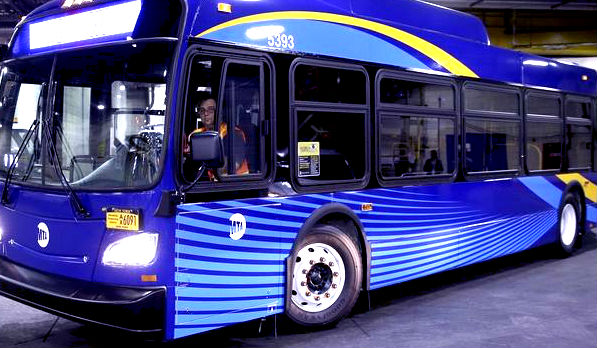 He rallied one of the Police teams headed out to enforce the law and tow cars parked along bus routes with dedicated bus lanes around Manhattan. The seven new NYPD tow teams will operate in all five boroughs. The City has set an ambitious goal to increase bus speeds by 25% by 2020, using increased enforcement and street redesign.

“It shouldn’t be so hard to get around the greatest city in the world,” said Mayor de Blasio. “Buses are a critical link in our public transportation system, but too often they are painfully slow. I hope all New Yorkers get the message that we have to keep bus lanes clear to get people moving and to work on time.”

“The NYPD recognizes the important role that safe, on-time bus performance plays in New York City’s transportation network,” said NYPD Chief of Transportation Thomas Chan. “The NYPD is collaborating with our colleagues from the Department of Transportation and the MTA to keep bus routes across all five boroughs clear of illegally parked vehicles. As Mayor de Blasio mentioned in his State of the City address, the NYPD now has a dedicated team of tow trucks and enforcement agents that patrol bus lanes and bus routes across this City with the goal of increasing bus speeds.”

“As part of his State of the City, the Mayor made a bold pledge to increase bus speeds by 25% by 2020, really an incredibly ambitious goal,” said DOT Commissioner Polly Trottenberg. “We thank our partners at NYPD for starting their aggressive work today on a critical routes in Midtown and around the City– as they make sure that bus riders can make it where they need to go.”

As part of his State of the City Address, the Mayor noted that on average buses only move at 7.4 mph and in busy commercial districts, the average speed is less than 4 mph. Bus ridership is down across the City as riders avoid trips and choose faster, more reliable modes of transportation.

As part of his State of the City Address, the Mayor noted that on average buses only move at 7.4 mph and in busy commercial districts, the average speed is less than 4 mph. Bus ridership is down across the City as riders avoid trips and choose faster, more reliable modes of transportation. The City and the MTA are committed to working together to improve bus service citywide. Mayor de Blasio, the Department of Transportation (DOT), and the New York City Police Department (NYPD) are building on past efforts to get New Yorkers moving. The City has the power to redesign streets, install new bus lanes, and remove more vehicles blocking bus lanes. The MTA and State may control the buses, but the City has the tools to help reverse downward ridership trends and increase average bus speeds 25% by the end of 2020.

In addition to the efforts to increase NYPD enforcement, as part of “Better Buses for All,” the Mayor announced the following:

“I appreciate the shared commitment of NYCDOT and NYPD to improve bus lane enforcement,” said Brooklyn Borough President Eric Adams. “It will go a long way toward a much-needed bus turnaround in our city, as will greater implementation of street redesigns and improved collaboration with MTA New York City Transit.”

“We’ve got to do whatever it takes to improve Manhattan bus speeds so that bus transit is faster than walking,” said Manhattan Borough President Gale A. Brewer. “Enforcing existing law is an essential first step.”

“I am pleased to see the Mayor’s plan to address increasing overall bus speeds for riders, an incredibly important effort for Staten Islanders who face some of the longest commutes in the country,” said Staten Island Borough President Jim Oddo. “There is much work that needs to be done to give back commuters a large part of their day, but partnering with the NYPD to crackdown on bus lane enforcement is a crucial step to address those skirting the traffic laws that in turn make our commuters work day exponentially longer.”

“Buses in my district move at a glacial 4.7 mph on average— the slowest speed in the city,”

“Buses in my district move at a glacial 4.7 mph on average— the slowest speed in the city,” said State Senator Brad Hoylman. “When you can walk faster than the M42 or M50, you know you’ve got a problem. Better enforcement is exactly what we need to make riding the bus a fast, reliable mode of transit across our city. Thank you to Mayor de Blasio, DOT Commissioner Trottenberg, and NYPD Chief Chan for striving to make our buses work better for all New Yorkers.”

“Millions of residents, workers, and visitors rely on buses to travel around our city, but with service becoming even slower and more irregular, the City is right to step up enforcement of vehicles blocking the bus lane,” said Assembly Member Richard N. Gottfried. “Better enforcement will help improve travel times for everyone.”