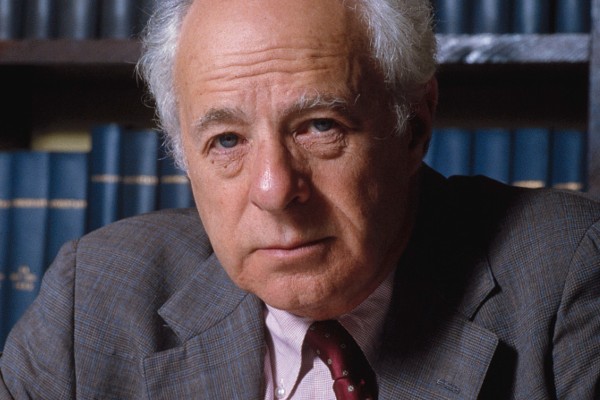 Norman Podhoretz, born January 16, 1930, is a neoconservative pundit, who identifies his views as “paleo-neoconservative”. He is a writer for Commentary magazine.

The son of Julius and Helen (Woliner) Podhoretz, Jewish immigrants from the Central European region of Galicia (then part of Poland, now Ukraine), Podhoretz was born and raised in Brownsville, Brooklyn. Podhoretz’s family was leftist, with his elder sister joining a socialist youth movement.

Following his admission to Harvard University and New York University with partial tuition scholarships, Podhoretz ultimately elected to attend Columbia University when he was granted a full Pulitzer Scholarship.

In 1950, Podhoretz received his BA degree in English literature from Columbia University while living at 924 West End in Harlem, where he was mentored by Lionel Trilling.

In 1950, Podhoretz received his BA degree in English literature from Columbia University while living at 924 West End in Harlem, where he was mentored by Lionel Trilling.

He concurrently earned a second bachelor’s degree in Hebrew literature from the nearby Jewish Theological Seminary of America; although Podhoretz never intended to enter the rabbinate, his father (who only attended synagogue on the High Holidays) wanted to ensure that his son was nonetheless conversant in “the intellectual tradition of his people”, as “a nonobservant New World Jew who … treasured the Hebraic tradition”.

After being awarded the Kellett Fellowship from Columbia in Harlem and a Fulbright Scholarship, he later received a second BA in literature with first-class honors and an Oxbridge MA from Clare College, Cambridge, where he briefly pursued doctoral studies after rejecting a graduate fellowship from Harvard.

He also served in the United States Army from 1953 to 1955 as a draftee assigned to the Army Security Agency.

Podhoretz served as Commentary magazine’s Editor-in-Chief from 1960 (when he replaced Elliot E. Cohen) until his retirement in 1995. Podhoretz remains Commentary’s Editor-at-Large.

“… the wholesale merging of the two races [as] the most desirable alternative for everyone concerned.”

In 1963, he wrote the essay “My Negro Problem – And Ours“, in which he described the oppression he felt from African-Americans as a child, and concluded by calling for a color-blind society, and advocated “the wholesale merging of the two races [as] the most desirable alternative for everyone concerned.”

The award recognized Podhoretz’s intellectual contributions as editor-in-chief of Commentary magazine and as a senior fellow at the Hudson Institute.

Norman Podhoretz was one of the original signatories of the “Statement of Principles” of the Project for the New American Century founded in 1997.

That organization sent a letter to President Clinton in 1998 advocating the removal by force of Saddam Husein in Iraq.

Podhoretz received the Guardian of Zion Award from Bar-Ilan University on May 24, 2007.

He served as a senior foreign policy advisor to Rudy Giuliani in his 2008 presidential campaign. The same year, he publicly advocated an American attack on Iran.

Podhoretz’s 2009 book Why Are Jews Liberals? questions why American Jews for decades have been dependable Democrats, often supporting the party by margins of better than two-to-one, even in years of Republican landslides.

Podhoretz is married to author Midge Decter, and together they have had two children: the syndicated columnist and current Commentary editor-in-chief John Podhoretz and the American-Israeli journalist Ruthie Blum.

Norman Podhoretz said in early 2019, of his large family and its relation to his political views: “[I]f [Trump] doesn’t win in 2020, I would despair of the future. I have 13 grandchildren and 12 great-grandchildren, and they are hostages to fortune. So I don’t have the luxury of not caring what’s going to happen after I’m gone.”

Initially, a staunch liberal, Podhoretz moved Commentary to the left editorially when he took over the magazine.

However, he became increasingly critical of the New Left and gradually moved rightward as the 1960s wore on. By the 1970s, he was a leading member of the neoconservative movement.

Podhoretz has downplayed the importance of American history to his political beliefs. When Gore Vidal was writing his play On the March to the Sea, based on General William Tecumseh Sherman’s March to the Sea during the U.S. Civil War, Podhoretz asked him:

“Why are you writing a play about, of all things, the Civil War?” When Vidal explained that this was/is “the great, single tragic event that gives resonance to our Republic”, Podhoretz replied, “To me, the Civil War is as remote and irrelevant as the War of the Roses”.

In the leadup to the 2003 U.S. invasion of Iraq, Podhoretz argued strongly for military intervention, claiming that Saddam Hussein posed a direct threat to the United States.

After the 9/11 attack and more than a year before the start of the War in Iraq, Podhoretz wrote in February 2002 that “There is no doubt that Saddam already possesses large stores of chemical and biological weapons, and may … be ‘on the precipice of nuclear power.’ … Some urge that we … concentrate on easier targets first. Others contend that the longer we wait, the more dangerous Saddam will grow. Yet whether or not Iraq becomes the second front in the war against terrorism, one thing is certain: there can be no victory in this war if it ends with Saddam Hussein still in power.”

In 2007, Podhoretz argued that the United States should attack Iranian nuclear facilities. According to The Sunday Times, Podhoretz believes that “Iraq, Afghanistan, and Iran are merely different fronts of the same long war.”

Podhoretz describes diplomatic efforts with Iran as similar to the appeasement of Nazi Germany prior to World War II.

He also contends that the War on Terror is a war against Islamofascism, and constitutes World War IV (World War III having been the Cold War), and advocates the bombing of Iran to preempt Iranian acquisition of nuclear weapons.

His book on that subject, entitled World War IV: The Long Struggle Against Islamofascism, was published by Doubleday on September 11, 2007.

In a 2007 column, Podhoretz explicitly stated his view that Iran should be attacked: “In short, the plain and brutal truth is that if Iran is to be prevented from developing a nuclear arsenal, there is no alternative to the actual use of military force—any more than there was an alternative to force if Hitler was to be stopped in 1938.”

In an editorial to The Wall Street Journal on the sixth anniversary of the September 11 attacks, Podhoretz contends that the retreat from Iraq should not be similar to the retreat from Vietnam. He argues that when the U.S. withdrew from Vietnam, it sacrificed its national honor.

In 1982, James Fallows wrote a review of Podhoretz’s book, Why We Were in Vietnam, for The New York Times, in which he accuses Podhoretz of “changing his views” and “self-righteousness” on the subject of Vietnam, noting that in 1971 Podhoretz wrote that he would “prefer just such an American defeat to a ‘Vietnamization’ of the war.”

A larger quote from Why We Were in Vietnam which was included in the review is as follows:

As one who has never believed that anything good would ever come for us or for the world from an unambiguous American defeat, I now find myself – and here is the main source of my own embarrassment in writing about Vietnam – unhappily moving to the side of those who would prefer just such an American defeat to a ‘Vietnamization’ of the war which calls for the indefinite and unlimited bombardment by American pilots in American planes of every country in that already devastated region.

In the early 1980s, Podhoretz was extremely skeptical that fundamental reform was possible in the USSR, and sharply criticized those who argued that U.S. policy toward the Soviet Union should be one of détente.

In his 1980 book The Present Danger, Podhoretz predicted that the United States was in danger of losing the Cold War and falling behind the Soviet Union as a global power.

Later he would express anger with President Ronald Reagan for “not establishing sufficiently strong policies toward the Soviets.”

Podhoretz has praised Bush, calling him “a man who knows evil when he sees it and who has demonstrated an unfailingly courageous willingness to endure vilification and contumely in setting his face against it.” He calls Bush the president who was “battered more mercilessly and with less justification than any other in living memory.”

In a 2010 Wall Street Journal opinion piece titled “In Defense of Sarah Palin,” Podhoretz wrote, “I hereby declare that I would rather be ruled by the Tea Party than by the Democratic Party, and I would rather have Sarah Palin sitting in the Oval Office than Barack Obama.”

“I began to be bothered by the hatred that was building up against Trump from my soon to be new set of ex-friends. It really disgusted me. I just thought it had no objective correlative… They called them dishonorable, or opportunists, or cowards—and this was done by people like Bret Stephens, Bill Kristol, and various others. And I took offense at that. So that inclined me to what I then became: anti-anti-Trump.

By the time he finally won the nomination, I was sliding into a pro-Trump position, which has grown stronger and more passionate as time has gone on.

Podhoretz says his views however, have caused him to lose ex-friends who were anti-Trump, saying: “Well some of them have gone so far as to make me wonder whether they’ve lost their minds altogether.” Of Trump, he argues: “[T]he fact that Trump was elected is a kind of miracle. I now believe he’s an unworthy vessel chosen by God to save us from the evil on the Left… His virtues are the virtues of the street kids of Brooklyn. You don’t back away from a fight and you fight to win. That’s one of the things that the Americans who love him, love him for—that he’s willing to fight, not willing but eager to fight. And that’s the main virtue and all the rest stem from, as Klingenstein says, his love of America. I mean, Trump loves America.”

Podhoretz says that he had formerly been unthinkingly pro-immigration “because I’m the child of immigrants. And I thought it was unseemly of me to oppose what not only had saved my life, but had given me the best life I think I could possibly have had.” However, his views later changed: ” In 1924, immigration virtually stopped and the rationale for the new policy was to give newcomers a chance to assimilate—which may or may not have been the main reason—but it probably worked.

What has changed my mind about immigration now—even legal immigration—is that our culture has weakened to the point where it’s no longer attractive enough for people to want to assimilate to, and we don’t insist that they do assimilate. … That was the culture of the prewar period.

What has changed my mind about immigration now—even legal immigration—is that our culture has weakened to the point where it’s no longer attractive enough for people to want to assimilate to, and we don’t insist that they do assimilate. … That was the culture of the prewar period.

You certainly wanted your children to be Americans—real Americans.