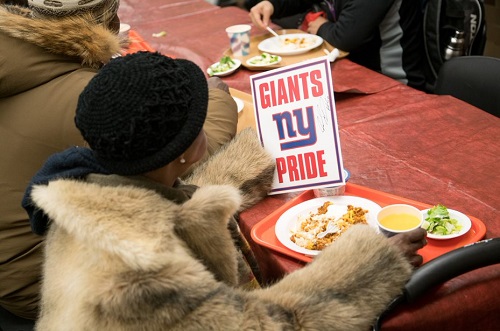 The National Football League today announced the launch of the Inspire Change platform, showcasing the collaborative efforts of players, owners and the league to create positive change in communities across the country.

Working together with the Players Coalition, NFL teams and the league office continue to support programs and initiatives that reduce barriers to opportunity, with a focus on three priority areas:

The Inspire Change platform includes the debut of a new television spot, which will air during this weekend’s playoff games. Additional versions of the television spot will continue to air throughout the post-season, including on Super Bowl Sunday during pregame programming.

As part of the league’s ongoing commitment to social justice, the joint NFL players-owners working group recently approved two new social justice grants focused on the three priority areas. The grants were issued to Big Brothers Big Sisters of America (BBBSA) and Operation HOPE. BBBSA will use the funding to support agencies across the country as they create long-term mentoring relationships that empower youth to reach their full potential and help communities connect across racial and economic divides. Operation HOPE will use the funds in support of their nationwide work within underserved communities to equip young people and adults with the financial tools and education to secure a better future.

“Our vision is to create a stronger, more inclusive economy—and by extension, society through financial empowerment – and financial dignity. Think of the difference our programs make in people’s lives as they improve their FICO scores by 100 points or more. Think about the impact on families and communities as more people and more local businesses succeed. And consider the new investments and jobs that come to communities where people are financially secure and young people have the skills to be productive. We are proud to partner with the NFL as part of the Inspire Change initiative to bring meaningful impact to our communities and advance the critical dialogue on social justice taking place nationally.” – John Hope Bryant, Operation HOPE Founder, Chairman, and Chief Executive Officer.

“We are honored to be working with the NFL on the Inspire Change Initiative. Mentoring is a proven long-term strategy for bridging gaps in academics and income, and this grant will allow our agencies to create more strong mentoring relationships,” – PAM IORIO, President and CEO of Big Brothers Big Sisters of America.

These grants build on the two grants issued last season to Dream Corps and the UNCF (United Negro College Fund). With this support, Dream Corps’ #cut50 initiative helped pass the bi-partisan First Step Act, and UNCF is developing and launching a new criminal and social justice initiative. The new program aims to alleviate the impact of mass incarceration on individuals and communities through the prism of higher education, specifically UNCF’s 37 member-institutions and other historically black colleges and universities (HBCUs). Additional grants will be announced as they are approved in the coming months.

“The coalition of bi-partisan support was the secret sauce behind the passage of the First Step Act, and the unlikely allies we brought together for the historic legislation are what we are all about — we work across deep divides to inspire change and solve America’s toughest problems. We back initiatives that close prison doors (#cut50) and open doors of opportunity (#YesWeCode) and we are excited to continue our NFL partnership for even bigger changes in the future.” – Van Jones, President & Founder of the Dream Corps.

“For 75 years, UNCF has supported educational opportunities for the most disenfranchised communities. With the support of the NFL, this new effort will build on the history of HBCUs as some of the oldest social justice organizations in this country. Our ultimate aim is breaking the cycle of incarceration and increasing the likelihood that low-income individuals and individuals of color are on a path to educational and economic success, not prison,” – Dr. Michael Lomax, President, and CEO of UNCF.

The league also announced today that it will partner with digital learning curriculum leader EverFi on a high school-focused African-American History education program. NFL funding will allow thousands of students in 175 underserved schools in Arkansas, Florida, Georgia, Montana, and North Carolina to take part in the digital curriculum, at no charge to the schools or students. The schools were selected by EverFi based on areas of need and biggest opportunities for impact.

Inspire Change is a comprehensive platform for social change that also includes:

Visit www.nfl.com/inspirechange and join the conversation on social media with the hashtag #inspirechange.

For more information about the joint commitment of NFL players and the league to strengthening communities through social justice, please see the following: