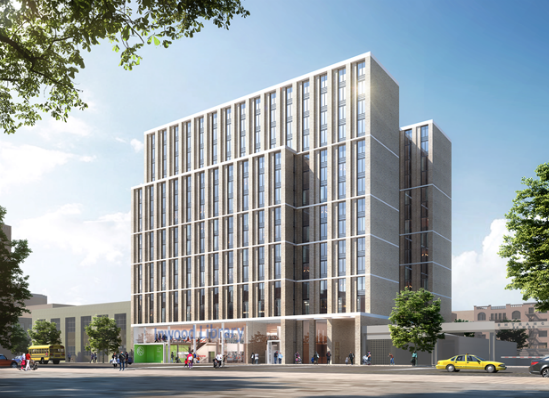 The city has filed controversial plans to transform the Inwood Library branch into a 14-story residential building with a three-story library at its base.

After years of planning, officials with the Department of Housing Preservation and Development (HPD) filed plans with the Department of Buildings (DOB) Monday for the project, revealing new details about the development at 4790 Broadway. In place of the current public library branch, a new building will rise to 143 feet with 174 below-market-rate apartments. Tenants will have access to community space, a laundry room, and bike parking, according to DOB records.

Overall, the building will feature 144,679 square feet, the majority of which—some 118,432 square feet—will be devoted to residential with the remaining 26,247 square feet dedicated to library and community space, building plans show. The project also calls for classroom space for a Pre-K center. Demolition plans for the existing building have yet to be filed, but the project filing is a sign that the redevelopment is taking shape.

The new building—dubbed The Eliza after Eliza Hamilton, the wife of Alexander Hamilton—will have a mix of studio through three-bedroom units geared toward low-income New Yorkers. Those earning between $20,040 and $40,080 annually are eligible to apply for apartments there, as well as families earning between $25,770 and $51,540. Some 20 percent of the units will be set aside for families of three earning less than $26,000 per year and for formerly homeless tenants, HPD has said.