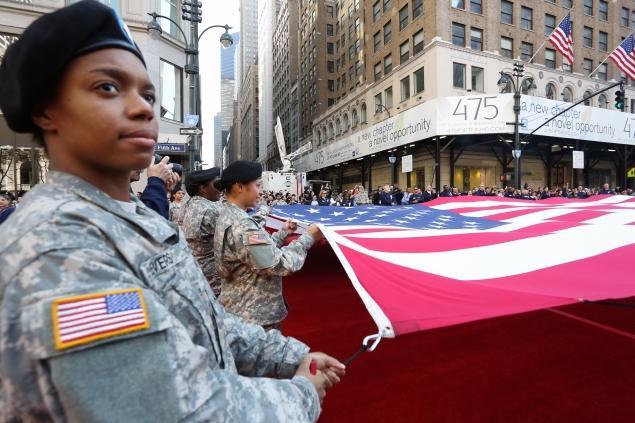 Awarded a Bronze Star after tours in Afghanistan and Iraq, Army Military Police Sergeant Thomas Donaldson ’22 is now focused on his next mission, his education.

It’s something even a hero can use a hand with. On this Veterans Day, John Jay College (just 15 minutes from Harlem) is proud to announce the new Beshar Scholars Military Service Award, which will help Donaldson complete his Master’s in Security Management at John Jay College of Criminal Justice.

“Attending John Jay was always a dream of mine,” said Donaldson, who is now a member of the NYPD. “Now that I’m a little older and have a family, thousands of dollars for school are needed yet hard to come by. This scholarship has provided me with such relief.”

Peter and Sarah Beshar have stepped up to help John Jay’s veteran and military service members who have given so much to our country. The Beshar Scholars Military Service Award offers scholarships of up to $2,500 a year to help cover any financial gaps that might keep veterans and service members from graduating.

Peter Beshar, Executive Vice President and General Counsel of the Marsh & McLennan Companies, is a member of the John Jay College Foundation Board and Chair of its Veterans’ Committee. In 2016, he received an honorary membership to the SALUTE National Veterans Honor Society and was an architect of the Veterans on Campus initiative within the New York City Department of Veterans Services.

“Members of the armed forces talk about ‘having your six.’ I am right behind you and have your back. For soldiers, marines, sailors, and airmen who had our back in Afghanistan and Iraq and want to graduate from John Jay, it’s our turn to have their back,” said Beshar.

“It’s our hope that these John Jay military students and veterans are able to finish up their education, and enjoy that journey,” added Sarah Beshar. “After they graduate, they will undoubtedly go out into the world and use a John Jay degree as a springboard to continue their service to the community.”

Ten students received the award this academic year, including sophomore Lorraine Gonzalez ’22, a Human Resource Specialist in the U.S. Army Reserves. Gonzalez lives in a one-room apartment in New Jersey with her dad, also a veteran.

“The award will be used to help my disabled dad out since he helps me pay for tuition,” said Gonzalez who is studying for a degree in Forensic Toxicology. “I want him to know that I’m hoping to be a great role model one day in my field of study and that all the sacrifices he’s made for me won’t go to waste.” (Read more about Lorraine Gonzalez)

“Our veteran and military students have served in every military role, in every corner of the world, and our community is continually enriched by the diversity of their experiences. Their commitment to our country is a sterling example of public service,” said John Jay College President Karol V. Mason.

“With the help of scholarships such as the Beshar Scholars Military Service Award, these talented students can apply the same vigor and focus that they displayed in the military to advancing their education at John Jay and preparing for future leadership roles,” said John Jay College President Karol V. Mason.

“The peer support for John Jay veterans, by John Jay veterans, is an amazing resource,” said John Jay’s Military and Veteran Services Manager Richard Pusateri. “Whether someone served 20 years, or just began serving in the National Guard, our military students discover they’re part of a team at John Jay, that they have peer mentors and friends who understand military experience and are willing to support and help when needed.”

Recipients of this year’s scholarship were selected based on criteria including if they exhausted other benefits like TAP and PELL or need assistance to cover expenses, including books and technology.

John Jay is home to faculty and research centers at the forefront of advancing criminal and social justice reform. In teaching, scholarship, and research, the College engages the theme of justice and explores fundamental human desires for fairness, equality, and the rule of law. For more information, visit www.jjay.cuny.edu and follow us on Twitter @JohnJayCollege.

Prior to joining Marsh & McLennan in 2004, Mr. Beshar was a litigation partner at Gibson, Dunn & Crutcher LLP. Mr. Beshar joined Gibson Dunn in 1995 after serving as the Assistant Attorney General in charge of the New York State Attorney General’s Task Force on Illegal Firearms. In 1992 and 1993, Mr. Beshar served as the Special Assistant to Secretary Cyrus Vance in connection with the United Nations’ peace negotiations in the former Yugoslavia.

Mr. Beshar is the recipient of the Business Leadership Award from the Citizens Union of New York, the Burton Award for Leadership in the Law, and the Law and Society Award from New York Lawyers for the Public Interest. In 2014, Mr. Beshar was appointed by President Obama as a trustee of the Woodrow Wilson Center for International Scholars in Washington.

Sarah Beshar currently serves as a non-executive director of Invesco, a global asset manager with over $1 trillion of assets under management. Prior to joining the Invesco Board, Ms. Beshar served as a corporate partner at Davis Polk & Wardwell LLP for thirty years.