The new “Affordability Index” specifically tracks how much money New York City households have left over after taxes and basic expenses – money which they could use to save for retirement, pay for college expenses, or just take a family vacation – which the index finds has declined substantially, leaving New Yorkers with less money saved for a rainy day.

The NYC Affordability Index analyzes the particular challenges that New York City residents face as affordability declines, which other indicators fail to capture. The Index shows that basic costs for necessities like housing, transportation, health- and child-care, as well as food, have risen at nearly twice the rate of incomes, with damaging effects for New York City households:

“We all feel the squeeze from incomes that lag behind rising costs – but now, we’re showing exactly what that means for New Yorkers across our city. With this tool we’re taking a long-term look at how the City’s changing economy is affecting our neighbors and friends,” said New York City Comptroller Scott M. Stringer. “Over the last decade, the money that New Yorkers could be putting away – for retirement, for college, or even for a simple family night out – has been shrinking. Our growing affordability crisis is making it harder for families to enjoy a basic middle-class lifestyle – and is forcing them to choose between staying in New York City and leaving. We can’t allow working people to be pushed out of New York and become a city where only the wealthy can afford to live. To keep New York an aspirational city, we have to do more.”

In its analysis of incomes, tax rates, household budgets, and spending on basic necessities, the Affordability Index shows that from 2005 to 2016: 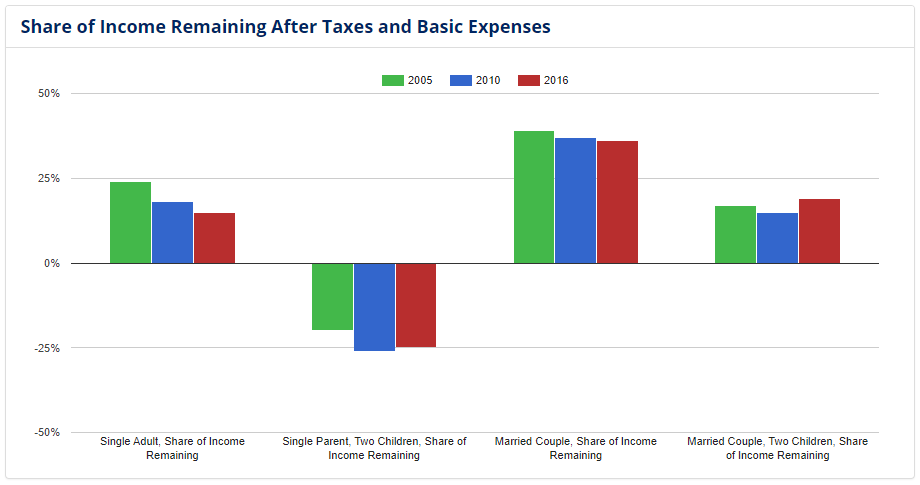 “While declining affordability is a crisis in so many cities, it hits New Yorkers particularly hard,” said Comptroller Stringer. “We need to use every tool in the kit to tackle this crisis head-on. From building the next generation of affordable housing to addressing the rising cost of child care, we have to take a stand and make sure everyone gets a fair shot to succeed in New York.”