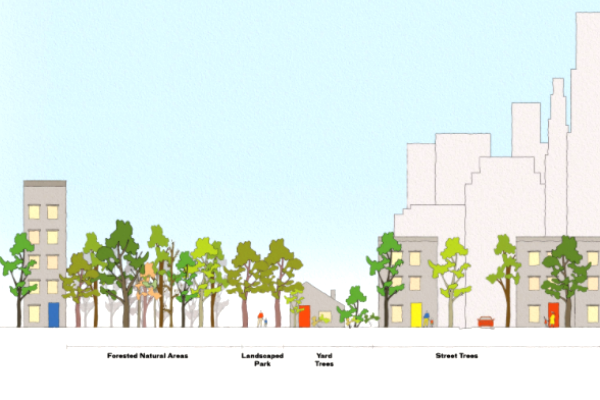 While forested natural areas account for only a quarter of New York City’s total tree canopy, the report underscores the extensive role they could play in mitigating climate change. However, there is a crucial need to prioritize forest management in order for the city’s trees to thrive and provide climate benefits — including carbon sequestration, carbon storage, and moderating rising temperatures.

The complete report can be viewed at https://naturalareasnyc.org/climate.

During photosynthesis, trees remove CO2 from the atmosphere and store it in their leaves, trunk and roots, reducing the amount of carbon that exists in the atmosphere. In New York City, the trees that grow in forested natural areas cover just 5.5 percent of the city’s land area but are responsible for 83 percent of the carbon sequestered and 69 percent of the carbon stored in trees citywide — significantly more than trees planted on city streets. More broadly, the city’s natural areas are storing and sequestering carbon at a similar rate as rural forests.

But New York City’s natural areas are at a tipping point. Declining or degraded forests do not store the same levels of carbon as our healthy forests. When trees die, they emit their stored carbon and therefore increase carbon levels in the atmosphere. With urban natural areas under threat from long-standing challenges like development and the increased prevalence of invasive plants, better forest management is critical in New York City’s fight against climate change.

New York City is not the only major city facing this challenge. Across the U.S. there are more than one million acres of urban natural areas that exist in our country’s 100 most populous cities. As these cities draft climate action plans and promote tree planting, this report shows the potential that protecting and caring for existing urban forests have in mitigating climate change and lowering carbon levels in the atmosphere.

“Individual trees make a positive difference wherever they are, but when they’re part of a healthy forest, their impact is much greater,” said Sarah Charlop-Powers, Executive Director of the Natural Areas Conservancy. “Urban natural areas play a critical role in removing and storing carbon from the atmosphere and cooling New York City’s rising temperatures. As our city tackles the climate crisis and looks for effective strategies to achieve carbon neutrality, it is imperative that we turn to our forested natural areas. These natural resources have enormous potential, but forest management is an essential part of that calculation.”

“Nobody should be under the illusion that forests are a magic bullet to solve climate change,” said Mark Bradford, Professor of Soils and Ecosystem Ecology at Yale’s School of the Environment. “But they are an integral part of the solution to reducing emissions and they provide benefits that reach far beyond carbon storage — including clean water supply and habitat for the many species we rely on for a safe, habitable world. The NAC’s leadership in highlighting the disproportionately large contribution that forested natural areas play in the ecosystem carbon budget of cities helps highlight the need for ongoing management to sustain their value. Avoiding forest degradation is one of the primary actions we must take to protect our environment.”

Natural areas surveyed include: Van Cortlandt Park in The Bronx, Prospect Park in Brooklyn, Forest Park in Queens, Inwood Hill Park in Upper Manhattan and the Greenbelt in Staten Island.

The report, which surveyed some of New York City’s biggest natural areas, is the first rigorous calculation of the amount of carbon stored in urban forested natural areas using field-collected data. Natural areas surveyed include: Van Cortlandt Park in The Bronx, Prospect Park in Brooklyn, Forest Park in Queens, Inwood Hill Park in Upper Manhattan and the Greenbelt in Staten Island. 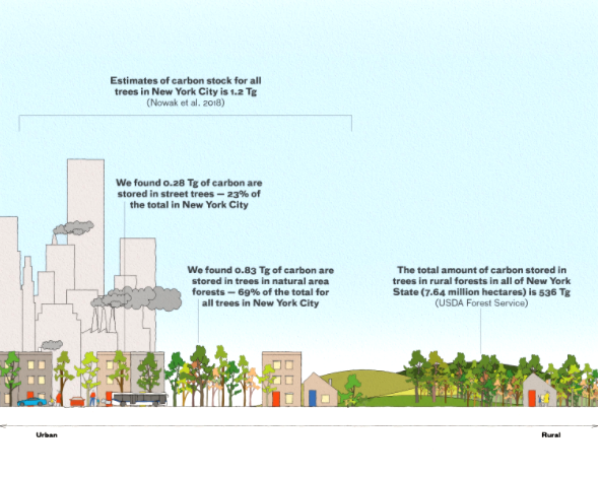 There are 7,300 acres of forest under the jurisdiction of NYC Parks. These natural resources are not self-sustaining — they require forestry management and care in order to grow and thrive. The species composition, tree size and conditions within forests can influence the amount of carbon stored and sequestered. Urban forests are particularly vulnerable, facing increased risk of fragmentation and exposure to invasive species, all of which can cause decline and degradation of forest health. Invasive species can outcompete native trees and lead to decreases in biodiversity, habitat quality and reduced benefits for city residents. As the stressors from urbanization magnify, understanding the trajectory of forests and the consequences for benefits, including carbon storage and sequestration, is vital to safeguarding these spaces.

The NAC recommends that urban forested natural areas be at the center of urban greening policies aimed at mitigating climate change, starting with increased management of the city’s forests to maintain and even increase the carbon storage and sequestration. In 2018, the NAC presented a comprehensive 25-year plan to bolster and protect the city’s forests in its Forest Management Framework for New York City.

Started in 2012, the Natural Areas Conservancy is a non-profit organization dedicated to preserving New York City’s 20,000 acres of forests and wetlands, and promoting nature’s diversity and resiliency across the five boroughs. naturalareasnyc.org