They were dressed to the nines!  After all, it was Sunday in Harlem.  Harlemites were known to dress their best, in the finest materials, and in the latest of styles for the Sunday afternoon fashion parades on the avenues.  I’ll keep You Posted wrote on Easter Sunday, March 28, 1948, there was a heightened sense of fabulousness in the air.

This would be no ordinary Easter Parade as thousands lined the sidewalks, crammed doorways, leaned out of windows or planted themselves directly outside of the Abyssinian Baptist Church on 138th Street for the most anticipated event of the season – the wedding of Nathaniel Adams Coles and Maria Hawkins Ellington.

There were oohs and ahhs from the crowd, and flashbulbs popped as Mrs. Charlotte Charity (the bride’s sister and Matron of Honor, top) emerged from a limousine bedecked an elaborate flowered hair wreath, a pale blue gown and a full-length fox.  Police helped keep the crowds at bay as women in less showy attire and little girls in Easter bonnets strained to get a better view.

The atmosphere inside the church was electric as hundreds (some sources say nearly 3,000) people packed the rafters to witness a wedding spectacle rumored to have cost anywhere between $17,500 – $25,000.  Behind the scenes, Nat Cole was suffering from a hangover and Maria was most certainly anxious.  It wasn’t the first trip down the aisle for the celebrity bride and groom and there was added stress due to the fact that both families were at odds.

Maria Hawkins was light-skinned, elegant and refined.  She was raised amongst the black elite by her aunt, the indomitable Charlotte Hawkins-Brown, founder and president of Palmer Memorial Institute in North Carolina, a selective prep school for upper class blacks.  Brown was also the author of The Correct Thing, a book of etiquette for upwardly mobile negroes.  Maria was a widow and had previously been married to a serviceman named Spurgeon Ellington and smartly decided to keep his name when she launched a singing career with the Duke Ellington (no relation) Orchestra in the mid-1940’s.

The dark-skinned, Chicago-raised Nat “King” Cole had poorer, more humble beginnings but was a respected jazz pianist and lead singer for the popular Nat King Cole Trio.  The Coles were not particularly cultured but they were extremely devout christians.  Nat’s father, Edward Coles, was a Baptist minister and his beloved mother, Perlina, was a preacher’s wife and church organist.  Nat Cole, however, was a man of affairs, and the ink on the divorce papers from his first wife, Nadine Robinson, had hardly dried by the time of his second marriage to Maria.

The fragrance of orange blossoms and Easter lillies permeated the sanctuary.  The aisles were decorated with freesias, palms, and various other flowers tied with yards of white satin ribbon.  By the time that the organist struck the keys to the march, the wedding party was smiling and radiant in silk and satin.  Guests gasped at the splendor as six bridesmaids and the soon-to-be Mrs. Cole glided down the aisle in an $700 ice blue satin gown created by Harlem designer, Zelda Wynn Valdez.  Waiting at the altar was the Rev. pastor Adam Clayton Powell Jr., of the Abbyssinian Baptist church and the wedding officiant. 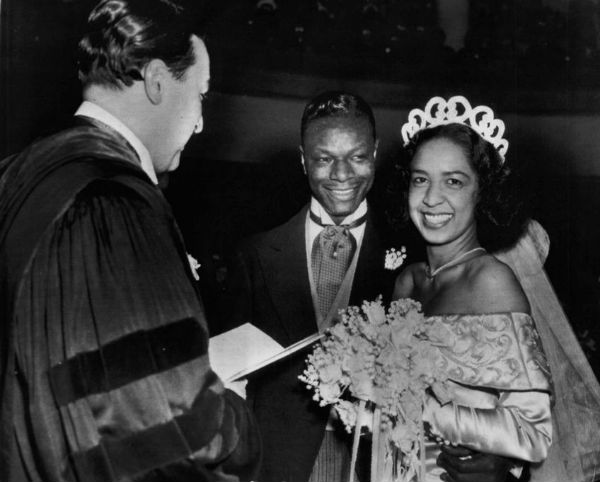 The service was brief but guests lingered over the bride’s designer gown, worn off the shoulder “with long sleeves ending in points over her hands, and a wide white beaded shawl collar on the bodice of the gown.  On her head shone a coronet of seed pearls and from it her bridal veil flowed down her back.  She wore no jewelry but a string of pearls; and she held a bouquet of seven white orchids, and lillies of the valley, wound with white streamers.” Nat was smooth as velvet and courvoissier dressed elegantly in a dark cutaway coat and striped gray trousers, a wing collar with a natty dove gray ascot.

The Waldorf Astoria was Mrs. Cole’s first choice for both the wedding and the reception, but after they were refused for being black, other arrangements were made.  A suitable location was found in the Moderne Room at the Belmont Plaza, a fashionable new hotel at 49th & Lexington Avenue in the East Forties.  There, an estimated 600 guests devoured 75 pounds of coleslaw, 18 turkeys, 20 hams, 18 rib roasts, and 197 bottles of champagne and spirits.  Among the notable attendees were Hazel Scott (Mrs. Adam Clayton Powell), singers Sarah Vaughn, Nellie Lutcher and Maxine Sullivan, actor Canada Lee, bandleaders Andy Kirk and Dizzy Gillespie, jazz writer Leonard Feather and countless reporters from newspapers and magazines like Life and the Afro American.

Charlotte Hawkins Brown thought that the couple was unequally yoked and did not approve of the wedding.  She did the correct thing and boycotted the whole affair.  Edward Coles was also conspicuously absent; he was needed at home to conduct the Easter services in his own church. 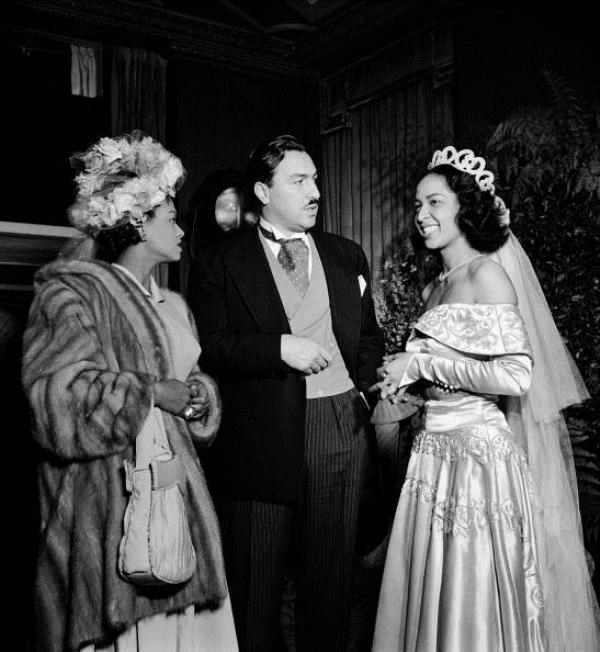 Mr. and Mrs. Cole started off the dancing at the reception to the tune of the Anniversary Waltz.

Check out the detail on the five layer wedding cake!  That’s Mrs. Perlina Coles, the groom’s mother, standing to his left.

Cameras captured a tender moment between mother and son, as a proud Perlina Coles beams in a voluminous dress accentuated by a corsage and floral hat.

Three-year-old Carole “Cookie” Lane, along with a young Miss Reed from Long Island acted as flower girls.  Cookie’s mother, Mrs. Carol Lane, the bride’s youngest sister, was secretly gravely ill during the ceremony, and the Coles would later adopt Cookie and raise her as their own.

The newlyweds packed six suitcases, two of Mrs. Coles fur coats, and a staff photographer from Ebony magazine and flew to Acapulco for their honeymoon.  It can be assumed that everyone else went back from whence they came and the fans on onlookers went home to Harlem.  After Nat and Maria Cole returned home, Charlotte Hawkins Brown invited them to her home in Sedalia, North Carolina for a reception in their honor.  She also invited the creme de la cream of local Negro Society.  She then left town without attending her own party.

This post is lovingly dedicated to the fans, friends and family of Nat and Maria Cole, especially Miss Natalie!