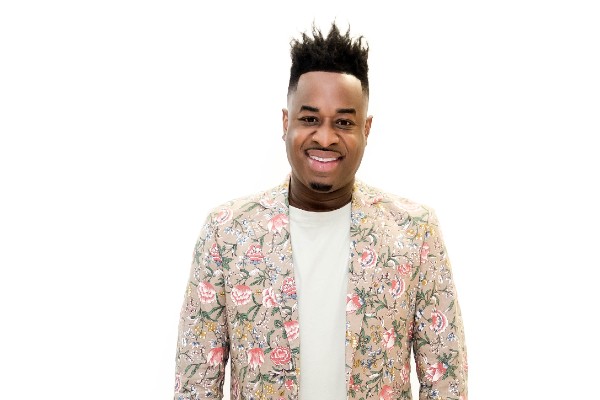 Multi-genre recording artist Damien Sneed returns to his Gospel roots with the release of his brand-new project, Damien Sneed UNPLUGGED on Friday, February 25, 2022, on his boutique label, LeChateau Earl Records.

UNPLUGGED is a collection of soulful and inspirational songs, recorded in a free-form, spare studio setting with Sneed on piano and vocals alongside several noted vocalists, including Chenee Campbell, Linny Smith, Tiffany Stevenson, and Matia Washington.

The album’s first single, “Jehovah God, You Are My All” has recently been serviced to Gospel radio. UNPLUGGED is available on all digital retail and streaming platforms.

The physical release of UNPLUGGED also coincides with Sneed’s special guest appearance at the Hammond Organ Summit at Berklee College of Music’s Piano and Voice departments today, February 24, 2022. He will lead two sessions titled Gospel Keyboard Techniques and Band Rehearsal Techniques, which are open to the Berklee community.

While in Boston, Sneed will continue to headline his 25-city North American tour, A Tribute to Aretha Franklin, The Queen of Soul featuring special guest singer-songwriter Valerie Simpson at Berklee Performance Center tomorrow, Friday, February 25, 2022. The tour also features Gospel legend Karen Clark Sheard, who is not featured on this Berklee date. This dynamic presentation celebrates the amazing musical legacy of the late Ms. Franklin, arranged and musically directed by Sneed, and features an accomplished cast of jazz, gospel, and soul musicians and vocalists. The tour kicked off Thursday, February 3, 2022, at the Parker Playhouse in Fort Lauderdale, Florida, and concludes on Sunday, March 20, 2022, at the Kupferberg Center for the Arts at Queens College in Flushing, NY, which will feature both Clark Sheard and Simpson on the final performance of the tour. For more information on the tour, please visit, www.damiensneed.com.

UNPLUGGED focuses on Sneed’s gospel side of his repertoire, leading a virtuosic ensemble of instrumentalists and vocalists with a special guest appearance by Stellar Gospel Music Award-winning artist Tasha Page-Lockhart, who has a string of Billboard chart-topping recordings to her credit.

UNPLUGGED reunites Sneed with singers whose careers he has seen grow over the years and with whom he has strong relationships. “I’m super proud of this album because all of the singers have grown up in the industry,” Sneed explains. “They all sing with major artists and they’re all artists in their own right.” Though most of the songs were previously recorded by Sneed, they were not previously rehearsed by the ensemble, and most are recorded in two parts to extend the improvisational feel. “We wanted people to just hear the raw execution of what just happened in the studio. We have never done that before. We just went in the studio saying, ‘No rehearsals whatsoever,’” says Sneed.

Weaving their incredible voices into intuitive and wholly unrehearsed harmonies at New York’s AlJo Studios in Queens, Sneed and his singers infuse the traditional spiritual “Oh, Freedom” and previously recorded tunes like “Still Small Voice” and “Broken to Minister” with incandescent fervor. Sneed chose to record “Oh, Freedom” as a direct response to the unjust killing of George Floyd and support of the Black Lives Matter movement. “In the Black church, gospel music was also big for protests and reconciliations, focused social chains,” he explains. “I was just bringing back the significance of what gospel and the church stood for in civil rights.”

While Sneed and his singers and musicians were nervous about the coronavirus, they stepped out on faith by recording together in a single room, thrilled at the opportunity to create once more after so many pandemic shutdowns stopped them from performing live. The joy of their collaboration is evident in every note. “We were a little scared,” Sneed admits, “but we trusted each other.”

The project is the first studio album under Sneed’s name to be entirely within the gospel genre and bears similarities to his 2015 double-disc project, Broken To Minister: The Deluxe Edition. During the height of the pandemic, Sneed won a 2020 Dove Award and was recognized for his work as a producer on The Clark Sisters’ multiple award-winning albums The Return, which featured the single, “Broken To Minister” that he co-wrote and co-produced. The Return album also won a 2021 NAACP Image Award.

Sneed is a composer, conductor, pianist and vocalist, and arts educator whose work spans multiple genres. He has also worked with classical, jazz, and R&B legends, including the late Jessye Norman, and is featured on Norman’s final recording, Bound For The Promised Land.

Sneed is also the founder and artistic director of Chorale Le Chateau, which has gained a global reputation for its vivid interpretations of vocal literature, from Renaissance period pieces to art songs to jazz, spirituals, gospel, and avant-garde contemporary music.

His other recordings include Classically Harlem (which commemorated the centennial of the Harlem Renaissance (1920-2020), Jazz in Manhattan (September 2019), Damien Sneed: We Shall Overcome (January 2019), Broken to Minister: The Deluxe Edition (March 2015), Spiritual Sketches (June 2013), and Introspections LIVE (January 2010).

The Sphinx Medal of Excellence recipient is also featured in the award-winning PBS documentary Everyone Has a Place, which stars Wynton Marsalis. The film captures Sneed’s journey as the musical conductor of the historic performance of Marsalis’ “Abyssinian Mass,” which was performed by the world-renowned Jazz at Lincoln Center Orchestra and Sneed’s 70-piece Chorale LeChateau.

In 2019, Sneed joined the faculty of the Manhattan School of Music, where he teaches graduate-level courses in conducting, African American Music History, a singer/songwriter ensemble, a gospel music ensemble, and private lessons in piano, voice, and composition.

A graduate of John S. Davidson Fine Arts School in his hometown of Augusta, GA., Sneed studied at some of the finest conservatories and universities, including Howard University, where he earned a Bachelor of Music – Piano Performance; the Peabody Conservatory of Johns Hopkins University; New York University, where he earned a Master of Music in Music Technology: Scoring for Film and Multimedia; and the Manhattan School of Music.

Sneed will graduate with his doctorate in Orchestral Conducting from USC in 2022. Sneed was a member of the faculty at the Clive Davis Institute of Recorded Music at New York University’s Tisch School of the Arts and Nyack College.

His other professional affiliations have included The Juilliard School as a staff accompanist, Jazz at Lincoln Center as an artistic consultant, and the City University of New York (CUNY) as a professor of music. In 2015, Sneed established the Damien Sneed Performing Arts Institute, a division of the Damien Sneed Foundation.

In 2019 and 2020, Sneed embarked on two 40-city North American tours, “We Shall Overcome: A Celebration of Dr. Martin Luther King, Jr., featuring Damien Sneed.” In honor of Dr. King, Sneed delivered his brand of classical, jazz, and sanctified soul to venues across the country during MLK’s holiday, Black History Month, and Women’s History Month.

For more information on Damien Sneed and LeChateau Earl Records, go to www.damiensneed.com and www.lechateauearl.com.