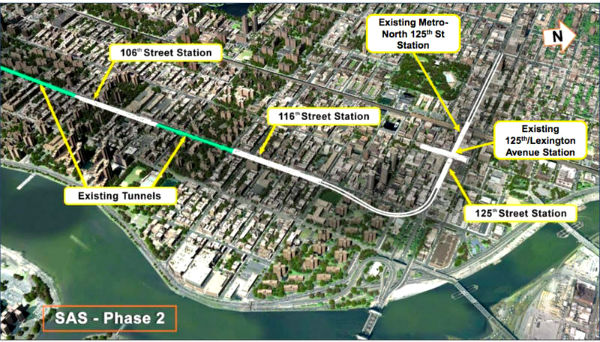 As the Metropolitan Transit Authority slowly but surely moves ahead with plans to extend the new Second Avenue Subway line up through East Harlem, it’s letting neighborhood resident and businesses know how the new subway could affect them.

The MTA recently released a Supplemental Environmental Assessment of the plan that details the scope of both the design and construction aspects of the massive infrastructure project. The second phase of the Second Avenue Subway project will extend the Q train from East 96th Street to East 125th Street with new stations at East 106th, 116th, and 125th streets.

So what should East Harlem expect before the new subway line is completed? A headache, most likely.

The MTA is currently conducting preliminary engineering work and researching the areas for its new East Harlem stations to determine where it will need to build ancillary structures, station entrances and other new infrastructure, according to an MTA presentation from late July.

As the agency makes its determinations, it will need to acquire private property near its new stations on East 106th, 116th, and 125th streets, which will result in the displacement of businesses and homes, according to the presentation. People who are displaced will be provided with compensation and relocation assistance, the MTA said.

“We have a lot of minorities and a lot of mom-and-pop stores and it’s concerning to me that they are going to be displaced,” a neighborhood resident told New York 1.

“We have a lot of minorities and a lot of mom-and-pop stores and it’s concerning to me that they are going to be displaced,” a neighborhood resident told New York 1.

Construction work on the new stations will also throw a wrench in the daily lives of Harlemites. The MTA says areas near the new stations on East 106th, 116th, and 125th streets will experience worse traffic, bus stop relocations, loud noise and dust emissions in the air near the work sites. The entire project is expected to take nine years to complete, the MTA said.

The MTA will be building cut-and-cover stations — stations that are located closer to street level — at East 106th and 116th streets in order to connect two stretches of existing subway tunnels built in the 70s and will build a mined station at East 125th Street that will require the construction of a new tunnel using boring machines to cut through underground rock.

Documents from the MTA and Federal Transit Administration target 2029 for completion on the line’s second phase — which extends service along Second Avenue through East Harlem to East 125th Street — the Daily News first reported.

The MTA will need to begin construction by mid-2019 to make a 2029 opening possible, the Daily News reported. Transit officials told the newspaper that the agency believes a 2027 opening is possible.